Imagine seeing a woman stop on the street to give a dollar to a homeless person. Would that inspire you to give yourself, or would you just walk on? 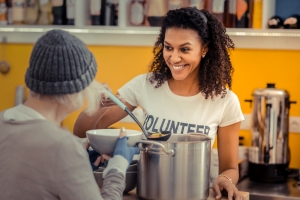 Many of us would be moved to give, which might even inspire others to give, creating a cycle of generosity. That’s not necessarily a universal response, though: Sometimes people pay kindness forward, and sometimes they don’t. Clearly, something can get in the way of our altruistic impulses. But what?

Two new studies shed some light on this question. Their findings suggest that when we see others give, our minds are making nuanced judgments about the people and the situation—which in turn affect whether we give ourselves. Understanding those judgments and how to work with them could help spread more kindness in our communities and around the world.

How we judge altruistic acts

When we see people engage in charity, one new study suggests, we judge them partly based on their social status.

In the study, participants read a fictitious media report about a German volunteer handing out food to refugees at a refugee center. In some accounts, the volunteer was a well-known public figure or a professional with a presumed high income (a stockbroker); in others, the person was an everyday citizen or had a lower economic status (a carpenter). The reports also varied in whether the depicted volunteer wanted their generosity to be made public or had tried (but failed) to keep it private.

After reading the accounts, the participants were asked how altruistic the volunteer’s motives were (versus egoistic or self-centered).

“These findings show that people do not automatically judge others’ good deeds as altruistically motivated,” says lead author Birte Siem of FernUniversität in Germany. “One and the same behavior—handing out food to refugees at German refugee accommodations—can lead to altruistic or egoistic ascriptions, depending.”

Social status and the desire for publicity are not the only factors affecting how we view giving. Another study suggests that it also depends on how emotionally rewarding the giving is—though maybe not in the way you’d expect.

In this second study, participants read scenarios about acts of generosity that differed in how much they’d produce that “warm glow” feeling of giving versus how much benefit recipients would receive. For example, giving a flower to a young child would make the giver feel good but not bring much benefit, while writing a check to a large charity would help many people but not produce much warm glow.

Participants imagined they were playing the role of the giver in each scenario and rated how good it would feel to give—a measure of the “warm glow”—and how much benefit others would receive from the gift. Then, they judged how “praiseworthy” each act of generosity was.

The researchers found that, while people thought all forms of giving were praiseworthy, they rated giving acts that produced a warm-glow feeling as more praiseworthy than those that produced significant benefit. This surprised Daniel Yudkin, lead author of the study.

“You would think that what makes something good or praiseworthy is the overall effect that it has on others, not the feeling you get from doing it,” he says.

But, he adds, this makes sense when looking through the lens of evolution. Since historically humans have spent more time in small, close-knit communities, people have probably learned to rely on their emotions when making quick evaluations about others’ behavior, including their altruism.

“We’re more sensitive to the ways good acts are noticeable, measurable, and emotionally satisfying than how abstractly ‘good’ they are,” Yudkin says.

Why our judgments about altruism matter

It’s important to understand how we judge other people’s altruistic behavior, because it may influence our own kindness and giving. In that way, both Yudkin’s and Siem’s studies have important implications for charities and other philanthropic causes.

Siem and her colleague found that participants were less willing to help out the volunteer’s cause—to give money, volunteer themselves, or simply promote it verbally—if they believed the volunteer was more egoistic.

“Participants didn’t want to spend their own resources (e.g., their time, their money) on a campaign that they perceived to be ‘misused’ by the helper for their own egoistic reasons,” says Siem. “This finding is highly relevant, because the decision not to join in a helper’s cause not only harms the helper (the campaign doesn’t attract as many followers), but ultimately harms the recipients of the help.”

Siem’s work suggests that charities may be in a double bind when it comes to celebrity endorsements: While people may have biases against high-status individuals, they can also bring attention to a cause that might otherwise fly below our radar. Not to mention, all charities need publicity in order to attract donations.

She thinks we should try to look beyond our biases when being generous.

“When contemplating about whether or not to donate money or to join in a volunteer campaign, it’s important to realize that the deed itself is what counts in the end,” says Siem. “If you feel a charity campaign will benefit the recipients, you should support it even if you suspect the initiators or the flagship people are engaging in this campaign for rather selfish reasons.”

In addition, to encourage more giving and volunteering, charities may want to appeal to the emotional benefits of altruism, says Yudkin.

“Charities shouldn’t be afraid to play up the aspects of their cause that elicit warm-glow feelings,” he says. “The more that you can make a credible claim to that, the more motivated people will be to give and the more successful the charity will be.”

Yudkin admits that his study may have been somewhat artificial in the way it was constructed. Fortunately, many acts of goodness are both emotionally satisfying and of widespread benefit to others—like participating in a bike ride to fund AIDs research or distributing food for the homeless in your community.

“It’s definitely the case that when people get a good feeling from generous acts, they will often actually be helping other people, too,” he says.

The role emotions should play in giving

This isn’t the first research to suggest that our decisions to give aren’t based solely on how much benefit we can do. Other studies have found that our emotions are heavily involved—driving us to give the same amount to an organization whether it helps save 200 or 2,000 people, and to give more after hearing a compelling story of one person than statistics describing a thousand people in need.

And therein lies a potential problem: While making judgments about giving based on emotions may be natural, it can also lead to unfair outcomes. This is why some authors have been pushing for a more dispassionate approach to altruism—sometimes called “effective altruism”—in which people aim to make their giving count for the most people possible rather than trusting their emotions to lead them.

Yudkin has sympathy for that viewpoint, but feels it may miss the mark.

“I don’t think that we should deny the aspect of our humanity that makes moral and personal decisions on the basis of emotion,” he says. “Instead, we have to acknowledge the role that emotions play and become more aware of the motivations driving us, so we can make more conscious decisions.”

And, rather than suppress warm feelings around giving, Yudkin suggests we work with them, deliberately widening our circle of care to include people further from our own social groups.

“We need to understand that emotions play some important role in motivating why we do what we do,” he says. “While there’s no doubt that in an ideal world we would all be very rational calculators when it comes to helping others, the reality is that human beings just aren’t that way.”