Altruism is part of our evolved instinct. The desire to help others in need has been an evolutionary advantage in the course of human development, leading to greater cooperation and group survival. But can we leverage that instinct better, in order to provide relief from suffering to more people around the world, especially the very poor? 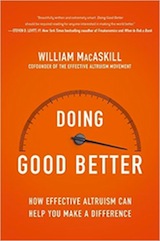 That question is at the heart of two new books, Doing Good Better, by William MacAskill, a philosopher at Oxford University, and The Most Good You Can Do, by Peter Singer, a moral philosopher at Princeton University. Touting a new approach to giving called “effective altruism,” these books aim to encourage people to take a deeper look at how and why we give of ourselves and consider making some radical adjustments.

MacAskill is the cofounder of two nonprofits: Giving What We Can, which encourages people to give 10 percent of their income to charities with a proven track record of effectiveness, and 80,000 Hours, which advises graduates on how to choose a career path aimed at doing the most good possible. According to MacAskill, many young people—particularly millennials—are motivated by their desire to do good, but they want to be efficacious in how they go about it. That’s where “effective altruism” comes in.

“Effective altruism is about asking, ‘How can I make the biggest difference I can?’ and using evidence and careful reasoning to try to find an answer,” writes MacAskill. “It takes a scientific approach to doing good.” 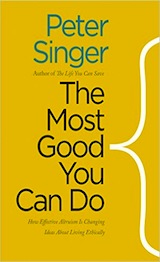 MacAskill’s book is rife with examples of nonprofit programs and charitable causes with high aims but poor results. Sadly, some of these programs attract heavy sums of aid money, which could be better spent in other, more effective programs, he argues. This is what motivated MacAskill to suggest we all learn to temper our emotional motivations for giving with reason and analysis.

Research has shown that we often make decisions around giving based on emotional reactions to advertising, or because of a personal connection to a cause. Instead, MacAskill believes, we should invest our dollars in whatever way will impact the greatest number of people and do the greatest good—a utilitarian approach. To that end, he suggests people disengage from their emotional reactivity and, instead, invest in charities that have a proven track record at providing the most benefit for the buck—charities like his and others recommended on sites such as GiveWell.

According to MacAskill, becoming an effective altruist means agreeing with the idea that we should care equally about all people—or, in some cases, all beings (to include animals in the mix). Effective altruists also believe that it’s best to do the most good and relieve the most suffering possible, regardless of personal connections to the people served. Lastly, they believe in tools that can help donors compare one charity’s effectiveness to another in some meaningful way, even if those charities have totally different aims. With these assumptions in mind, effective altruists claim they can decide, for example, whether it’s best to help prevent malaria in Uganda or help rape victims receive necessary surgery in Somalia.

Of course, this is where the emotionalism of charitable giving is severely tested: our call to give is deeply affected by our own personal backgrounds and what moves us to act, and it’s difficult to be dispassionate in these circumstances. Still, MacAskill suggests we try.

“When it comes to helping others, being unreflective means being ineffective,” he writes.

MacAskill draws from economic theory to try to make decisions around giving more rationally, using metrics like the “quality-adjusted life year” or QALY—something that allows economists to compare how different health interventions improve quality of life. QALY’s, he argues, are useful in charitable giving too, where otherwise it might be difficult to compare interventions—for example, the benefits of providing guide dogs for the blind versus donating to an organization that supplies books to kids in impoverished communities. Though it may seem overly calculating, such decisions need to be made, argues MacAskill, if we are to provide the most good to the most people.

“It might initially seem like such a comparison is impossible, but if we knew the impact of each of these actives on people’s wellbeing, then we could compare them,” he writes.

He also uses the concepts of “marginal utility” and “diminishing returns” to explain why it might not be a great idea to donate to well-publicized disaster relief programs. You may feel pulled to do so because of a gut response to news stories; but so will many others, and there are many more causes needing your dollars where the number of lives saved/dollar spent could be so much greater.

By evaluating different interventions and their proven outcomes, MacAskill makes several somewhat counter-intuitive suggestions, including not buying Fair Trade products, giving up eating chicken instead of beef, and paying to offset your carbon footprint rather than trying to reduce it. He also makes a case against CharityNavigator—a popular online resource for evaluating charities’ spending patterns—because it doesn’t include measurements on the effectiveness of the charities it evaluates. And he goes so far as to say that “following your passion” may not be the best way to make a difference in the world, and that you can sometimes make more of a difference by simply earning enough money to be able to give substantial portions away.

“Earning to give enables you to start having a significant positive impact via the very most cost-effective organizations right from the beginning of your career, “ he argues.

MacAskill’s book is pretty convincing; so one may wonder what Singer has to add. Singer’s book is actually quite similar to MacAskill’s in many ways, making the same arguments for effective altruism and even using some of the same examples of charities gone right or wrong. But, despite the similarity, Singer focuses a bit more on the philosophical side of the argument, and that makes for some interesting reading.

Singer argues that altruism based on the need for self-sacrifice is outdated. Many effective altruists live comfortable lives, he writes; but that doesn’t mean that their giving is not altruistic. He points to the work of evolutionary biologist David Sloan Wilson, who also argues that altruism should be evaluated on its merits and its positive results rather than on the intent of the person involved.

“If doing the most you can for others means that you are also flourishing, then that is the best possible outcome for everyone,” writes Singer.

His book impresses upon readers that anyone can get involved to make a difference in the lives of our fellow humans, and that it doesn’t necessarily involve working for a nonprofit or living like a monk. Like MacAskill, Singer recognizes that we in the United States are much, much better off than most of the rest of the world. This has inspired him to start an organization called The Life You Can Save, which encourages people to spend on charities doing relief work in the poorest parts of the world, where dollars can have the biggest impact.

Singer considers some of the difficult questions within the effective altruism movement, such as, “Should we consider the suffering of animals to be equivalent to those of humans?” and, “Is it OK to earn lots of money on the stock market, which some consider harmful, if you plan to give a lot of the money away to charitable causes?” Ultimately, Singer decides the answers are “yes” and “yes” to these questions, based on effective altruism principles.

He turns to the work of Joshua Greene, who has studied moral decision-making and uncovered the ways that emotions play a role in that process. Greene’s research suggests that, when making moral decisions, we need to employ reason—particularly in cases involving those who are not from our own “tribe.” Singer uses Greene’s research to support the ideals of effective altruism, explaining why we can’t always trust our instincts.

However, sometimes Singer misses the mark, especially when he uses individual cases to disprove arguments against effective altruism. In one chapter, he devotes a lot of space to discounting David Brooks’ concerns over the practice of encouraging idealists to work on Wall Street in order to donate more money—something proponents of effective altruism sometimes do. But, Singer proving his point with examples of people who did so without being corrupted—rather than providing scientific evidence that people won’t be corrupted—seems an odd choice coming from someone who is cautioning readers to give only to scientifically-proven charities.

In much of his book, it seems as if Singer is suggesting that doing good should be devoid of relationship—that it doesn’t matter if you have any contact with the people you help or any passion for the cause you support. Yet, in another instance he champions an animal activist whose emotion around seeing animals suffer is what motivated him to become an effective altruist for animal rights. How does this square with the call for reason over passion?

Perhaps the problem is that neither Singer nor MacAskill give adequate consideration to the positive impact of emotions on altruism—for example, emotional empathy is what drives us to want to give in the first place. Though they do confess effective altruists feel good about giving and often experience increased life satisfaction—potential emotional motivators, by the way—they give little attention to how witnessing moral exemplars can inspire us to want to do good ourselves, or being personally connected to the people we help can make us happier and healthier as well as break down social barriers, or how the urge to do good can be contagious within a population.

It seems improbable that we will create the world we want to see through donating exclusively to anonymous people on the other side of the world—whom we may never meet or connect with—based on someone else’s recommendations. Emotional connection and relationship, not statistics alone, is what moves most of us to care and nurture a compassionate heart. To discount that instinct is a mistake that I fear will turn many people off to the effective altruism ideal.

Yet, despite that concern, I highly recommend readers pick up at least one of these books. They definitely provide food for thought and a very interesting perspective on altruism and its effects on the world. If they inspire even a handful of skeptics to become more generous philanthropists, they are definitely worth a read.

And I won’t even insist that the authors prove they are providing the biggest bang for the buck.