Last year, the Hulu series “Ramy” made history when it became the first Muslim-American sitcom to ever win an Emmy nomination—two, actually, as both co-creator Ramy Youssef and supporting actor Mahershala Ali were nominated for their performances. 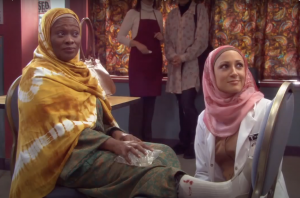 A scene from the Muslim-Canadian sitcom "Little Mosque on the Prairie."

Yousseff welcomed the news with an Arabic phrase Muslims use to thank God: “Alhamdulillah.” Although he did not ultimately win the Emmy that year, the recognition the show received just by being nominated was a sign of growing acceptance of Muslim-Americans.

We know through surveys that people are more likely to like Muslims if they know one personally. But because only about 1% of Americans practice the Islamic faith, many people just don’t come into contact with any Muslims.

That’s where entertainment comes in. One study of news coverage of Muslims in the 21st century found that it tends to be overwhelmingly negative, focusing on topics like terrorism and extremism. But a 2017 study that was recently successfully replicated by researchers in Germany shows us that entertainment featuring Muslims may be particularly effective in promoting tolerance.

Sohad Murrar, a psychologist who teaches at Governors State University, wanted to know if positive representation of Muslims could help change these perceptions. So, she worked with another researcher to perform an experiment where they showed some participants episodes from the popular Muslim-Canadian sitcom “Little Mosque on the Prairie” while showing other participants a sitcom featuring an all-white, non-Muslim cast. They then measured participants’ biases toward Muslims.

“It was pretty phenomenal,” she says. “We did see that the people who had watched ‘Little Mosque’ were a lot more positive towards Muslims both on explicit and implicit measures of prejudice and we did find that those effects held five weeks later.” She adds that unlike many other studies of anti-prejudice measures, her team made sure to measure the longer-term effects.

They also performed a second experiment where they found that a simple, four-minute music video served as an effective treatment to reduce prejudice.

Murrar’s research suggests that the entertainment industry can play a powerful role in exposing people to cultures they otherwise will have no positive contact with.

Through storytelling like that in “Little Mosque on the Prairie” and “Ramy”—shows that feature ordinary Muslims trying to find their way through life in North America—it’s very possible to persuade people that differences in religious and cultural practices don’t have to result in unbridgeable divides.

Sitcoms and other television programming can play a real role in exposing Americans to groups of people they may never encounter in their daily lives. Intergroup contact theory shows us that positive exposure to out-groups can reduce tensions and increase tolerance, and that entertainers like Ellen DeGeneres played a pivotal role in winning acceptance of gay and lesbian Americans.

For Youssef’s part, he hopes that the success of his show, which was renewed for a third season over the summer, will open the doors to telling even more Muslim stories. As he told the Hollywood Reporter:

I think that you watch our show, you realize in a good way that we’re not even close to covering the entirety of the Muslim experience. For a show that only portrays a sliver of it to get recognized, I think that that should mean that we’re going to get many more Muslim stories greenlit because the umbrella of the Muslim experience is so vast—it’s so many different groups, so many types of people.