With President Obama unveiling his BRAIN Initiative, research on neuroscience will no doubt expand exponentially, giving us all a greater understanding of how that organ between our ears influences everything from thought and behavior to health and happiness.

But researchers have already uncovered many interesting facts about how the brain functions—and recent books have tried to translate current neuroscience research into some practical advice for anyone wanting to improve their own brain capacity. 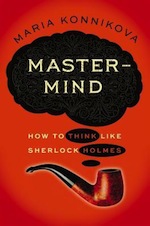 In Mastermind: How to Think Like Sherlock Holmes, science writer Maria Konnikova makes good use of our culture’s fascination with the agile mind of the famous fictional detective Sherlock Holmes to explain the brain science behind his genius.

According to Konnikova, it was Holmes’ ability to stay open to his perceptions of what was happening around him without prejudice that helped him pick up on clues that others missed and use those to solve his cases. Anyone can learn how to think like Holmes, she writes, allowing us to make better decisions and come up with more creative solutions to problems we may encounter in life.

Too often we are blind to the biases in the way our brain functions, and that colors our perceptions. For example, most of us are victims of the so-called “correspondence bias”—in which we form opinions about something or someone early on and then look for evidence to support it—often ignoring contradictory data. So, if we hear that Suzy is seducing her boss, and then later have that rumor contradicted, we may still associate her with seduction and regard her unfavorably.

We also tend to let our intuition run the show when it comes to making decisions, even when our intuitions are totally erroneous. Konnikova illustrates this with a funny story of how, when in a position to judge speakers at conference, she found herself fighting an urge to award top prizes to speakers with British accents, just because the accents made their contributions sound “smarter.”

“Our intuitions are powerful even when entirely inaccurate,” she writes. “And so it is essential to ask, when in the grip of a profound intuition…on what is my intuition based?” This kind of pause and reflection before judging can help one stay open to information and make better decision, she argues.

Holmes—like many scientists—possessed a natural skepticism, which allowed him to constantly question his own assumptions and catch himself at brain biases like these. To think more like Holmes, Konnikova argues, you need to both know yourself and your biases, and then practice the art of mindful observation. Motivation is important too, though, because to change your brain takes insight and practice…and lots of it. 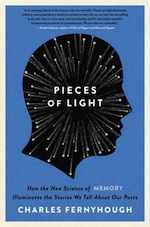 For those interested in how memory works, you may want to pick up the book Pieces of Light: How the New Science of Memory Illuminates the Stories We Tell About Our Pasts, by psychologist Charles Fernyhough. According to Fernybough, our memory has two functions: to remind us of what happened to us—what we saw, heard, tasted, etc.—and to weave a story from that sensory input consistent with our present understanding of ourselves and our place in the world.

Although many of us think of a memory as a fixed thing in the mind—much like a photograph or a video—neurologists have found that memory is fluid, constantly being re-created in our brains each time we recall something. Memory can be embellished or enhanced with each recall—much like a story can change with each retelling. This narrative aspect of memory is what fascinates Fernyhough most, and he mines neuroscience research, personal stories, and literary references to explain how memory functions in our daily lives.

The laying down of a memory is a process dictated by emotion and circumstances, and its recall can be different on different occasions. “Errors and distortions can creep in at every stage,” writes Fernyhough, even if we recall things vividly. Of course, this means memory is somewhat unreliable—a fact that makes for interesting analysis, especially around issues like eyewitness accounts. (Sherlock Holmes applied this knowledge to his cases—and used it to see what others could not!)

Fernyhough explains why sometimes smells or music can evoke powerful memories, and why many of our most vivid early memories come from a particular time in our lives (late childhood and early adulthood). But memory does more than reconstruct our past; it also plays a role in shaping our social lives and making decisions about in our future. Though the book is not a “how to” book for improving memory, it does make for enjoyable reading, and should make you a lot more sympathetic to your own and others’ memory lapses.

These two books give us insights into how brain science can help us understand our nature, improve our lives, and help us empathize with those who may have memory lapses or other difficulties. Hopefully, Obama’s backing of neuroscience research may spur even more discoveries about the brain that will allow for better understanding of what makes us human—our amazing capacities as well as our frailties. And who knows? Maybe it will give more of us the ability to think like Sherlock.