But why would there be a stark difference in the mental health and well-being of autistic people compared to “neurotypical” people? A recent study, one of the few looking at this issue, set out to examine the importance of acceptance. 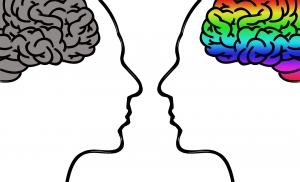 One hundred eleven autistic individuals in the U.K. filled out online surveys about their levels of acceptance—from themselves and society—and their depression, anxiety, and stress. Authentic autism acceptance would imply “an individual feeling accepted or appreciated as an autistic person, with autism positively recognized and accepted by others and the self as an integral part of that individual,” the study explained.

The results? As predicted, those who felt less accepted by others and by themselves showed higher levels of depression and stress.

In describing their experiences of not feeling accepted, respondents most often alluded to “misunderstandings and misconceptions about autism, experiences of masking/camouflaging,” and other issues, the study authors report. Masking and camouflaging refer to an autistic person making efforts to “pass” as neurotypical and the stress and exhaustion that result from that. It makes sense that feeling pressured to hide a part of yourself would result in higher stress and a tendency toward depression, given how critical social relationships and a sense of belonging are to well-being.

On the other hand, there was no significant link between autism acceptance and anxiety. The researchers postulate that anxiety can come from a host of sources for the autistic person; acceptance may not be as primary as, for example, the sensory sensitivities that can accompany autism.

So how can we support the mental health of autistic people?

According to the researchers, one factor that can contribute to acceptance is how we think about autism—in particular, whether we embrace the “neurodiversity” framework and a social model of disability, as opposed to a medical one. Neurodiversity is a way of conceptualizing mental differences as part of natural human diversity, as opposed to pathologizing some neurological makeups (such as autism) as abnormal. The social model of disability focuses on systemic factors within society that disadvantage particular people, whereas a medical model sees certain people as intrinsically, biologically disabled when they differ from a perceived norm.

The results of this study also indicate that we should pay greater attention to the stressful experience of “masking,” and ways that friends, colleagues, acquaintances, and family members can deepen their understanding of the autistic experience and help autistics feel seen for who they are.

A great place to start is to follow the #ActuallyAutistic hashtag on Twitter (an online social media movement whereby autistic voices are amplified with the slogan “nothing about us without us”), as well as the blog of autistic scholar and activist Nick Walker and my own The Neurodiversity Project. Learning about topics such as sensory sensitivities, heightened empathy (as opposed to lessened), and other unique autistic experiences can go a long way in understanding autistic people in our lives.

This particular study is noteworthy for surveying autistic individuals, as opposed to simply reporting professionals’ views of them. With greater self-acceptance and societal acceptance, autistic people may be able to foster a larger sense of belonging and agency, thereby reducing feelings of isolation, loneliness, and depression—all critical for mental health.