Don’t eat fats. No, unsaturated fats are good for you. The more you exercise, the better. No, actually exercising three times a week provides the same benefits. Alcohol is bad for you. No, moderate amounts of alcohol help your heart.

When it comes to health advice, there is often so much contradictory information out there in the media that it’s hard to separate the wheat from the chaff. 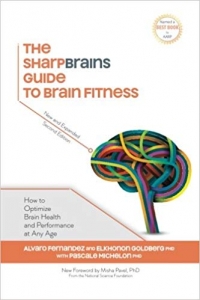 The same goes for information about brain fitness. With all the myriad of articles out there about what one can do to preserve cognitive function as you age, it’s nice to see the new book, The SharpBrains Guide to Brain Fitness, where all of the relevant information is in one place. Written by Alvaro Fernandez and neuroscientist Elkhonon Goldberg, cofounders of SharpBrains—a website that evaluates research on brain science—the book is a succinct and informative guide to cognitive and neuroscience research, with tips for increasing brain fitness included.

The book cover the basics of neuroplasticity—the brain’s ability to grow and develop new connections over time even as we age—and gives a good rationale for why we should treat brain fitness in much the same way we would physical fitness, which basically boils down to “use it or lose it.” Some of the diseases of aging, like cognitive decline or Alzheimer’s, can be postponed or improved with simple interventions, like moderate exercise, diet changes, and increasing one’s cognitive challenges.

In one study recounted in the book, researchers assigned older adults to either a cardiovascular exercise group (three hours per week) or a non-aerobic exercise group (stretching and toning) for six months. Then they scanned the brains of the adults in the study and found that the group in the aerobic exercise condition had more brain volume in their frontal and temporal lobes—parts of the brain associated with working memory, verbal reasoning, and planning, among other executive functions—than those in the non-aerobic condition.

In another predictive study, researchers looked at how levels of physical activity—specifically walking—predicted brain volume of elderly adults nine years later. They found that the longer distance people walked, the larger their brain volume and the lower the risk of developing dementia or cognitive impairment. These studies and others lead the authors to recommend moderate exercise, three times a week, for improved brain function.

The relationship between brain health and nutrition, cognitive exercises, and stress are explained as well. Following a Mediterranean diet high in nuts, fruits, vegetables, fish, and olive oil, with moderate alcohol consumption, seems to lessen the chances of cognitive decline and Alzheimer’s, as does participating in cognitive exercises that provide novelty, challenge, and variety—like, learning a new language, or taking up a new musical instrument. On the other hand, research does not support taking supplements like Ginkgo or doing endless crossword puzzles. These interventions may not do harm, but they may not make the cognitive difference readers seek.

The authors reveal that social engagement can make a difference in brain health, too. In one experiment, social interaction improved working memory, and in another, positive social interactions were shown to reduce stress. Although some stress is good for brain health, high levels of stress over a long period of time, if not managed well, can be harmful. Luckily, there are things people can do to help keep stress at optimum levels—like meditation or making lifestyle changes—that make a difference in brain health, too.

Unlike many books about brain fitness, the SharpBrains guide is not trying to sell products. And many of the tools they suggest can be easily managed by anyone. In addition, there is evidence that many of these behaviors help brain functioning at any age, have other positive effects (such as improved cardio-vascular health), and work together synergistically to improve brain function.

So perhaps it’s time to make a change and start paying more attention to that grey matter between our skulls. Picking up this book and following its recommendations might be a good start.