Everyone has days when they aren’t performing at the top of their game. I’m no exception. Some days, words flow readily to the page, and I’m proud of what I’ve accomplished. Other days, I stare at the blank page or struggle to come up with insightful ideas.

It would be nice if my efforts were more steady and productive. Fortunately, a new book offers science-based strategies for improving work performance, as well as becoming a better leader in the workplace.

In The Leading Brain: Powerful Science-Based Strategies for Achieving Peak Performance, authors Friederike Fabritius and Hans W. Hagemann of the Munich Leadership Group meld their business-world experience with findings from neuroscience to present a blueprint for how people can “work smarter, better, happier.”

The book focuses mostly on how to achieve particular goals—such as sharpening your focus, developing helpful work habits, and creating a high-performing team—that can help with productivity. Although The Leading Brain is directed towards those in the business world, and to managers in particular, even I—who have never worked in a traditional business environment—discovered some surprising findings and useful tips. 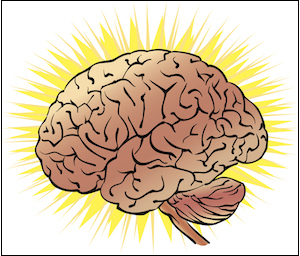 The Leading Brain begins with the somewhat controversial concept of “optimal arousal.” With low arousal (or stress), people don’t have enough interest or attention to perform well; with too much arousal, they feel too anxious to focus. In other words, it’s not simply the case that less stress is better; some middle ground might be optimal.

According to the book, the different levels of arousal people require for their own peak performance show up in their workplace personalities. People on one end of the spectrum may shut down under stressful situations, such as being asked to give an impromptu presentation. People on the other end might wait until the last minute to finish a project because they crave more pressure. In a worst-case scenario, Fabritius and Hagemann say that people who enjoy being stressed “sometimes manufacture emergencies” to survive in a traditional office environment, which they find stifling.

To understand your own preferences, the authors suggest making a list of the activities you do in a typical workweek and ranking them according to how they make you feel (overaroused, underaroused, or at the top of your game). Then, you can use tricks to manipulate your work environment—altering your hours, changing the physical space in which you work, inserting humor or exercise into your day, or reallocating your responsibilities—to reach your own unique sweet spot.

Even with adequate arousal, people often find it difficult to maintain focus on work tasks. The Leading Brain offers many strategies for staying focused, such as: 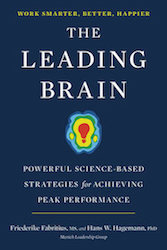 Another way to improve your performance at work is to turn tasks—particularly tasks you don’t like or that inspire procrastination—into habits. As Fabritius and Hagemann put it, a habit is a “labor-saving device” because our brains default to habits when possible. And we can use this to our advantage.

The key to adopting a new habit is to have a goal with emotional resonance: “The intensity of the accompanying emotion often influences the speed at which a new habit is adopted,” write the authors. “The goal you set should be specific, personal, and written down. In addition, you should have a set of action items that mark the steps leading to the goal’s completion.”

How to get started once you have this goal? Fabritius and Hagemann describe a technique for continuous improvement called the kaizen method, which originated with the U.S military and was later adopted by Japanese businesses. Kaizen involves taking small steps toward a goal in a way that minimizes procrastination and anxiety. “The secret of kaizen is that it operates below the radar of your brain’s threat response,” the authors write. (In other words, it appears that turning a stressful task into a series of smaller, more habitual tasks may help achieve optimal arousal.) The kaizen method can be used by individual employees as well as by supervisors who want to improve an employee’s or a team’s performance.

One particularly interesting section of the book focuses on the work of Helen Fisher, a biological anthropologist at Rutgers University who specializes in the neuroscience of relationships. Combining information from surveys, an Internet dating site, and functional magnetic resonance imaging of people’s brains, Fisher has identified four basic personality styles: the Explorer, the Builder, the Negotiator, and the Director. Unlike other personality assessments, such as Myers-Briggs, these are tied to observable brain differences.

Indeed, managers can inspire their employees by motivating them to develop their strengths. The authors suggest that performance reviews, which are largely ineffective and demotivating, can be fixed by focusing on employees’ top skills rather than their weak ones. “Doing something we’re good at focuses our attention, triggers a burst of dopamine, and often puts us into a rewarding state of flow,” they write. “Working on something we’re not so good at tends to lead to discouragement, frustration, and a dissipation of energy.”

Overall, The Leading Brain is a quick and enjoyable read; however, some of the connections between the neuroscience and the business advice seem weak. In particular, some of the science discussions behind the book’s tips are oversimplified, drawing from popular-science articles and books rather than primary journal articles. And occasionally the authors have included findings that are considered problematic in the field because they have been difficult to replicate, such as a study about power poses. Sometimes they use inaccurate facts, too, such as estimating that there are 1,000 billion nerve cells in your brain, when research suggests that number is closer to 83 billion.

Those caveats aside, The Leading Brain is a good read for someone looking for strategies to boost their work performance, as well as for leaders who are interested in new ways of thinking about how to create and manage teams.

Reading it even encouraged me to make some changes. I set up a morning writing habit, started a gratitude journal, and got (slightly) better at limiting my email time. I’m not sure yet how much this will improve my work performance, but at least I’m nudging my brain in the right direction