When Russia invaded Ukraine in February, rolling tanks through city streets and targeting homes and schools with missiles, Ukraine’s residents were forced to flee in record numbers. To date, more than 3 million Ukrainians have left the country, and the tide of refugees seems destined to swell for months or years to come. “It hurts in my soul, for my home, where I lived,” 94-year-old Yevhenia Khomenko, who fled Kyiv for Sacramento, California, told CNN. “I want to be in my own home. But the circumstances forced us to come here.” 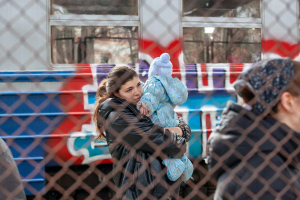 Many leaders and groups have stepped forward to help displaced war refugees make a fresh start. Neighboring Poland has announced that Ukrainians can stay there for at least half a year with full work privileges, and President Biden announced the U.S. would donate $1 billion to support humanitarian efforts in the region.

At the same time, we’ve seen our collective compassion for refugees run up against hard limits. Though the Ukraine war was top of mind for many Americans a month ago, the tide of new bad news is already starting to drown it out. And the Biden administration has capped the total number of refugees officially allowed to enter the U.S. this fiscal year at 125,000—fewer than some (much smaller) European countries have absorbed, and a limit out of step with the magnitude of the current crisis.

Uncomfortable disparities have also surfaced in the way we treat refugees, rooted in our feelings and snap judgments about them. In the West, Ukrainian refugees have consistently drawn more sympathy than those from places like Syria and Afghanistan.

There aren’t good reasons for these disparities—it makes no sense to value some refugees’ humanity more than others’. But when it comes to assessing the refugee situation, “it’s so easy to fall back on our feelings,” says University of Oregon psychologist Paul Slovic, co-creator of the Arithmetic of Compassion project. “It usually works for us—except when it doesn’t. And sometimes it really messes us up.”

To treat all refugees compassionately and fairly, we have to push past our initial, emotion-driven responses and craft more thoughtful ones aligned with our values, Slovic says. “By appreciating the way our minds work—and sometimes work in an unproductive way—we can overcome some of those biases.”

The anatomy of compassion collapse

Over the years, Slovic has reached a grim conclusion about compassion’s typical limits: The more people who are in need, the less inclined we often are to help them. Researchers call this “compassion fade” or “compassion collapse.” In one canonical study, people donated more to help when they were told about a single hungry child—a seven-year-old girl named Rokia—than when they heard about a group of children in equally dire conditions.

“Our feelings engage most strongly [to promote helping] when one person is in distress. Two people in distress don’t concern us twice as much,” Slovic says. “Once we get up to tens of thousands, they’re just numbers.”

This seems counterintuitive—after all, the greater refugees’ collective needs, the more ready we should be to act. But in real-life situations, researchers say, our compassion for large numbers of people in trouble shrinks when we start to feel overwhelmed. University of North Carolina studies suggest that our distress in the face of large-scale need compels us to blot out our awareness of that need. This emotion-driven response can mean vulnerable groups like refugees end up without adequate support or necessities.

Researchers have discovered one reliable way to fight compassion collapse, however: convincing people they can make a meaningful difference, no matter how many individuals are in need. One group of people who already seem to have this conviction are those who have gone through hard times in life, such as violence or natural disasters. In studies at Northeastern University and elsewhere, their compassionate response remained undimmed when they were told that many children from the Darfur region of Sudan were suffering from malnutrition and poor living conditions. In fact, people who’d faced adversity felt more compassion for a larger number of people in need than for a smaller number.

Enduring tough times seemed to strengthen people’s belief that they could act effectively—perhaps because they had direct experience helping themselves or others in the past. That suggests we can increase our potential for compassion by “cultivating the ability to relate our own suffering to the suffering of others,” says lead study author, Adelphi University psychologist Daniel Lim, “just like those who have suffered more adversity in life.”

Lim and his colleague David DeSteno hit on another way to boost people’s confidence in their ability to help, even if they hadn’t faced unusual hardships. They had people take a test ostensibly about emotions in facial expressions, then told some of the test-takers they had scored high in empathy-related skills. This feedback boosted their confidence in their ability to help children in Darfur. When they were asked questions like “How compassionate do you feel toward the children?” and “Do you think you would make a difference in helping the children?,” their responses showed high levels of compassion even when large numbers of children needed help.

To motivate yourself to act compassionately toward refugees, try brainstorming specific ways to help that match your skill set, which will give you the confidence you need. At the outset of the Ukraine war, Avi Schiffmann, a 19-year-old student at Harvard University, went to a demonstration and heard about thousands of Ukrainian refugees who needed a place to stay. Immediately, he thought of a way to put his expertise to use. “I remember thinking, ‘I know how to design websites with big platforms,’ so how could I not do anything to help?” Schiffmann told a CNN reporter. He created a site called Ukraine Take Shelter, which makes Craigslist-style connections between refugees and people who are open to housing them.

Questioning emotions that lead you off course

In addition to identifying relevant skills you can share, it’s important to remain aware of how your knee-jerk emotional reactions to refugees can lead you astray, Slovic says.

When you find yourself feeling distant from refugees’ needs, try revisiting that initial reaction a few hours or days later. Your emotions may nudge you toward helping one person rather than a larger group of thousands—or toward offering more help to Ukrainian refugees than those from elsewhere. But it makes sense to pause and ask yourself if these kinds of choices mesh with your highest values. “I think we have to face that and ask ourselves, ‘Do we really want to treat different groups differently?’” Slovic says.

Nobel Prize-winning psychologist Daniel Kahneman distinguishes between two different kinds of thinking: fast thinking, a lightning-quick, emotion-driven means of processing what’s going on, and slow thinking, a conscious, logic-based mode we enter when we’re carefully weighing factors that play into a decision. Prejudice is among the feelings often governed by fast thinking—studies show that biased beliefs about different people or groups can activate in the blink of an eye, in response to simple cues like words or images on a screen.

To help your just and compassionate leanings win out, “you need to switch away from your feelings into the other mode of thinking—more of the logical,” Slovic says. “And say, ‘Well, if this person or this family is so important, millions of these people are also important, and we need to make a commitment to doing what we can to help them.’” Likewise, you can remind yourself that if a Ukrainian refugee family is deserving of help, a Syrian or Afghan family is equally deserving.

Once you’ve decided what kind of response is consistent with your values, commit to taking some sort of concrete action—however humble—to help refugees, whether it’s starting a website, donating to a local charity, or booking a volunteer shift at a refugee center. Lots of people make the mistake of getting bogged down in depressing refugee news, Lim points out, which can stall their helping momentum. “If we are too involved in taking on the suffering of the refugees vicariously,” he says, “it might lead to compassion collapse and eventual inaction.”

But when you choose action over rumination, Slovic notes, you can touch off a kind of virtuous cycle that motivates you to continue helping. When you act on refugees’ behalf, you reinforce your own belief that your efforts can make a difference. That—along with the joy of getting to know refugees on a human level—could boost the chances you’ll take action again.

After participants in a University of Warsaw study met refugees in a day-long workshop, the empathy they felt for refugees in general soared. That kind of heightened empathy for refugees may fuel people’s willingness to help them, based on other studies that link empathy to compassionate action. “You need to foster the real, meaningful social satisfactions and interactions that come from doing this,” Slovic says, which are richest when you help refugees face-to-face, whether in person or online.

Along the same lines, join forces with other people who are as committed to helping refugees as you are. When Slovic and his wife were part of an Oregon group helping Syrian refugees, organizers hosted events to celebrate how far refugee families had come since their arrival. The families “would come in and meet the village that supported them, and we’d have a party. There was celebration and good feeling going in both directions,” Slovic says. “It’s not clear to me whether people realize how good it feels to help.”

On top of those “helper’s high” moments, joining a like-minded group allows you to accomplish more than you would alone—and that will help you feel more capable in the face of great need. “If we see ourselves as isolated individuals, there’s nothing we can do,” says Stanford University psychologist Jamil Zaki, author of The War for Kindness. “But if we see ourselves as part of a group, that group is much more powerful.”