Thanks to technology, we can work remotely, interacting with colleagues online rather than face to face. We can order our groceries and meals through delivery apps, so we don’t have to go out to stores and restaurants. We can look up information online, instead of asking someone else for answers. 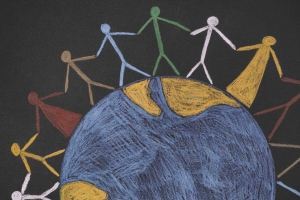 While technology offers us more convenience, it has a downside: It has decreased our contact with others, creating a society where we’re more independent—but also potentially lonelier and less empathic toward the people around us. Adam Waytz, of the Kellogg School of Management at Northwestern University, explores the implications of this societal change in his new book, The Power of Human: How Our Shared Humanity Can Help Us Create a Better World.

“I realized that a human-less experience is greatly deficient compared to a more human one, even if it comes at the expense of convenience,” he writes.

One big problem is that this societal shift may lead to an increase in dehumanization—that is, seeing others as less than fully human—which is “shockingly commonplace, consequential, and also curable,” Waytz writes. In his book, he outlines how this increase in dehumanization has happened—and how we can go about rebuilding the human connection that is so important to our relationships and our communities.

According to Waytz, dehumanization can be defined as “neglecting another person’s mind” or not recognizing that other people have thoughts of their own and are capable of feeling complex emotions. Humanization, on the other hand, means acknowledging that others have complex minds and intrinsic worth as human beings.

Humanization and dehumanization may have a neural basis, as studies have shown that we have a “mentalizing network” that we use when thinking about others’ mental states. Research finds that, when people view members of groups that are commonly dehumanized (such as homeless individuals or people struggling with addiction), their mentalizing networks show less activation.

Waytz points to politicians’ rhetoric in the 2016 election as an example of dehumanization. While perhaps some of the most infamous examples of dehumanizing language come from Republicans talking about the refugee crisis (e.g., Donald Trump Jr. likening some refugees to Skittles that would kill you), Waytz acknowledges that Democrats have used dehumanizing language, as well (including Hillary Clinton calling some Trump supporters deplorables).

Research suggests that we do seem to dehumanize our political opponents. For example, Waytz describes one study where participants who were outside in winter were asked to rate how cold another person would feel under the same conditions, and they thought someone who shared their political views would feel colder than someone with different political views. In other words, we underestimate how much our political opponents experience basic feelings like being cold, suggesting that we may not be recognizing their full humanity.

In addition to its political consequences, such as politicians’ failure to recognize the humanity of refugees and immigrants, dehumanization can occur in our daily lives, as well—even without us being aware of it. Not being fully present in a conversation with a friend (if you’re distracted or on your phone, for instance) could be considered a subtler type of dehumanization, Waytz points out.

Although researchers haven’t studied this directly, a variety of related trends may indicate that dehumanization is increasing, Waytz argues. He cites evidence that people are lonelier and less trusting than in past decades; we’re also less connected to our communities, and we tend to be more isolated. In addition, research suggests that empathy has decreased between 1979 and 2009. However you interpret this decline, Waytz emphasizes that something about our relationships with others has changed over the past few decades.

The power of human connection

Even though dehumanization might be increasing, we seem to crave human connection—and for good reason, given the profound benefits that we gain from it. Pursuing this need for connection is ultimately how we can overcome dehumanization. 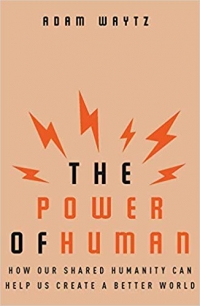 Waytz points out that being able to connect with a single person can profoundly affect our behavior toward them. For example, in one study, participants either read statistics about famine or saw a picture and description of a young girl in need of assistance (whom they were told their donation would be used to help). The researchers found that donations were over twice as high when a single person was identified, suggesting that a specific individual might motivate us more than general statistics.

This “identifiable victim effect” has implications outside of the research lab: When people saw the famous photo of Alan Kurdi, a Syrian refugee child who had drowned, donations to the Swedish Red Cross that were earmarked for Syrian refugees increased by a factor of one hundred.

Dehumanization plays a major role in conflict, as dehumanizing rhetoric is used by governments and military to justify violence. But there is an established strategy in social psychology for bringing together different groups and reducing conflict: developing a shared, common identity. This can be done by highlighting an overarching identity that members of two different groups share; even though they are of different religions or ethnicities, for example, they might share an identity as Americans or parents.

However, as Waytz explains, establishing common humanity to reduce dehumanization isn’t necessarily as simple as it might seem. A limitation of this approach is that it doesn’t take into consideration the power dynamics between groups. Calling for “civility” in political disputes can be problematic, if doing so requires marginalized groups to try to empathize with more powerful groups.

Instead, says Waytz, a better way forward in conflict situations is for more powerful groups to listen to marginalized groups and practice perspective taking: “For low-power groups, being heard can have vast and humanizing effects.”

How do we move forward from here? Although technology may be partially to blame for our current situation, Waytz realizes that abandoning technology isn’t the path forward; instead, we should work to build human connection into our increasingly technologically advanced lives. Even small steps, like making a point of asking someone else how they’re feeling or what they’re thinking, can be a move in the right direction—a way to humanize them and better understand their perspective.

Waytz also suggests taking time to unplug from work. “I believe people must work less and base their identities and self-worth less on their jobs,” he writes, explaining that the time we spend at work could be better spent trying to connect with other humans. Of course, this may be easier said than done, as companies are increasingly putting pressure on employees to always be available. However, Waytz argues that we would have much to gain from a societal shift that gave us the time necessary to build meaningful human connections.

Even though something about human relationships seems to have changed over the past several decades, Waytz argues that the increase in dehumanization isn’t irreversible or inevitable. Instead, he explains, it is both possible and necessary to work to “rehumanize” our connections with others.