Do you spend half an hour in the cereal aisle, trying to decide which box to buy? Explore all of your options online before clicking “buy” on a new pair of shoes? Agonize over the cost-benefit analysis of everything from new floss to new cars?

Then you may be what researchers call a “maximizer,” someone who tries to squeeze the maximum benefit out of every decision, constantly searching for the best possible option and outcome. Research by psychologist Barry Schwartz, among others, suggests that maximizers are less happy than “satisficers,” people who are content just to select options that are “good enough.” 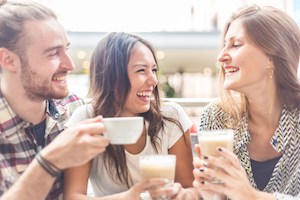 Most of the research on maximizing has focused on how we choose consumer goods. But recently researchers looked at its implications for a different realm: how we choose our friends.

In the first paper to investigate maximizing in the context of (nonromantic) friendships, a team of researchers led by David B. Newman of the University of Southern California explored how a tendency to seek out the “best” choice in who we befriend or socialize with relates to our psychological well-being.

Across five studies, Newman and colleagues found that people who tend to maximize when picking or deciding among their friends consistently report poorer well-being—i.e., they feel less happy, feel less satisfied with their lives, and even have lower self esteem. What’s more, the researchers trace this low well-being to feelings of regret. In other words, maximizers regret not making a different decision, and that regret impairs how they feel about themselves and their lives in general. Their results, published in the Journal of Personality and Social Psychology, also suggest that these feelings of regret and low well-being are even more likely when people feel they have a greater number of options available to them.

In one study, 149 undergraduate students who had recently joined a sorority or fraternity completed a questionnaire about their motivations and experiences during the recruitment process. They also completed surveys focusing on their levels of maximizing, emotional well-being, and satisfaction and regret about their final choice of fraternity or sorority.

Overall, the students who worked hard to maximize the benefits of their decision had a more negative emotional experience during the recruitment process and were less satisfied with their final choice.

Newman and colleagues also asked 172 current members of these sororities and fraternities to complete a questionnaire at the end of the formal recruitment process. In addition to measuring levels of maximizing, well-being, satisfaction, and regret with the recent recruitment, members were asked to reflect on their own recruitment experience in order to get a sense of the lasting effects that maximizing might have over time.

As with the new recruits, the people who maximized—either during the recent search for new members or in their own recruitment process—had a more negative emotional experience during recruitment and were less likely to be satisfied with the final decision.

Newman and colleagues also found that these experiences vary from day to day. For two weeks, 130 undergraduate students reported on their daily levels of maximizing (e.g., “Today I tried to keep my options open for spending time with different groups of friends”), as well as the number of potential friends they’d met that day, along with feelings of satisfaction, regret, self-esteem, and emotional well-being.

The researchers found that regardless of their general tendency to maximize, people experience poorer self-esteem and emotional well-being on days when they maximize more, and this association is largely explained by feelings of regret. In other words, wishing that you had selected a different party than the one you actually attended is likely to make you feel worse about yourself and your life. This is especially true on days when you have a greater number of options, likely because this provides even more opportunities to question the quality of any final choice.

These findings were echoed in a separate study with adults (on average in their mid-to-late 30s) in the United States and Japan: Maximizers reported lower well-being when they felt they had more choices about whom to become friends or socialize with.

In sum, write the authors, their findings “extend our current knowledge of maximizing” by suggesting that trying to maximize in our social lives is negatively linked to well-being—and these negative feelings are strongest when there are a greater number of alternatives available.

So, should you go bowling with your coworkers, have an overdue dinner with a college friend, or take that tango class you’ve been considering tonight? Whichever option you choose, jump in with both feet and enjoy it without second-guessing yourself. You won’t regret it.