Recently, I was on a plane traveling from Chicago to Charlottesville, Virginia, when something strange happened: I had a conversation with my seatmate. A recent college graduate, this young woman talked to me for the entire two-hour flight! 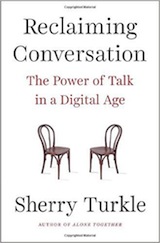 The sad thing is that this is so unusual as to be remarkable. These days, it seems as if people rarely have conversations at all, let alone with a stranger. Instead, too many of us studiously turn away from each other, bent over computers, ipads, and phones, trying to connect online rather than with the people right in front of us.

But, is this really a problem, or is it just the new normal? And, if it is problematic, what should we do about it?

That is the subject of Sherry Turkle’s new book, Reclaiming Conversation: The Power of Talk in a Digital Age. Turkle, an MIT professor, makes a convincing case that conversational skills, connection, and intimacy are fast disappearing, in large part due to our over-attachment to ubiquitous technology. She argues that, instead of throwing up our hands or giving in, we need to reclaim conversations and engage more with those around us. Otherwise, we risk losing much that makes our society work—like empathy, introspection, and the ability to work productively and creatively together.

Turkle’s book provides a wealth of scientific studies, as well as interviews with experts and technology users of all ages. According to research, the presence of cell phones in social situations, even when turned off, are associated with many ill effects, including inhibiting conversation and changing the nature of what is discussed. This leaves us vulnerable to shallow interactions that limit our ability to truly understand one another.

“If we think we might be interrupted, we keep conversations light, on topics of little controversy or consequence,” writes Turkle. “Conversations with phones on the landscape block empathic connection.”

What we learn from boredom

Researchers have found that those who spend more time online connecting with others are worse at identifying the feelings of others and even their own feelings. This is because we need eye contact in order to learn to read each other’s emotions correctly, which helps us create closeness.

The problem is that cell phones are hard to give up, because they lure us with their promise of instant gratification. I know I often open up my phone when I’m waiting in a doctor’s office or standing in line at a store, and I see others doing it too. We don’t like to be bored, lonely, or otherwise uncomfortable, writes Turkle, and our phones provide us with opportunities to escape those feelings. So, instead of resisting, we turn to our phones to relieve us, when we would do much better if we stayed with our feelings until they dissipated or transformed us.

Though escapism may seem innocuous, Turkle’s book connects it to some pretty damaging outcomes. Children don’t learn how to treat others in a way that considers their feelings, because they don’t look people in the eye. Teens no longer can concentrate in their classrooms, because they feel impelled to check cell phones for updated social messages or to fight boredom by surfing the web. Workers no longer interact with each other in casual conversations over lunch or even in work meetings, where everyone present can tune out to check email or shop online, leading to decreased productivity, creativity, and connection.

“Every time you check your phone in company, what you gain is a hit of stimulation, a neurochemical shot, and what you lose is what a friend, teacher, parent, lover, or co-worker just said, meant, felt,” she writes.

Many people become anxious without that hit of dopamine. But boredom has a purpose, writes Turkle, because it’s a signal to go deeper and to reflect. It teaches us to engage our imagination, which is important to creativity. Plus, when we tune out boredom, we learn to be uncomfortable with solitude, which is important for human development.

“Developmental psychology has long made the case for the importance of solitude. And now so does neuroscience,” write Turkle. “It is only when we are alone with our thoughts—not reacting to external stimuli—that we engage that part of the brains’ basic infrastructure devoted to building up a sense of our stable autobiographical past.”

More important for society at large, if we rely only on online connections for social contact, we lose perspective, shrouding ourselves in fixed ideas that we share with our networked circle. This creates group tensions in our society and a widening intolerance of difference, a situation we see in political discourse, as well as in personal relationships.

“Studies show that people don’t like posting things that their followers won’t agree with—everyone wants to be liked,” writes Turkle. “So technology can sustain ever more rigid partisanship that makes it hard to talk, enabling us to live in information bubbles that don’t let in dissenting voices.”

To her credit, Turkle gives voice to the people, including many teens, who support the ubiquitous use of technology and who see no point in turning it off. For example, she talks to LGBT youth who might feel ostracized living in isolated communities, but who receive support online from others living far away.

Also, some of her interviewees spoke about how texting or emailing was a positive way to communicate during conflicts, because responding online allowed you to edit yourself and avoid perpetuating fights or having knee jerk reactions to emotionally-threatening communications from others. It gives you a chance to avoid making a fool of yourself, and that is to the good.

But Turkle counters these examples by illustrating the many ways texting and emailing in these situations can go wrong, such as when it promotes misunderstanding. In addition, when someone delays responding to a text, or doesn’t respond at all, it can make the recipient feel lonely and humiliated. In hundreds of conversations Turkle had with teens and adults about their online lives, she found that many of them didn’t know how to interpret silence or delays, and were desensitized to the rudeness of it. That, in turn, sometimes turned into paying it forward, or even bullying others.

“I saw a generation settle into a new way of dealing with silence from other people: namely, deny that it hurts and put aside your understanding that if you do it to others, it will hurt them too.”

In one study recounted in the book, college-aged friends found that face-to-face conversations led to more emotional connection than other forms of communications, like video chatting online or instant messaging. That’s because you need that in person closeness to truly connect with another person. Texting just can’t convey emotion the way a face can—even with emoticons. In romantic contexts, texting can be downright misleading, as it’s nearly impossible to decipher sexual interest online. Plus, many people who go to parties or get-togethers often use their cell phones to search for the “perfect date,” leading them to discount whomever they happen to be with, in search of something better.

How to reclaim conversation 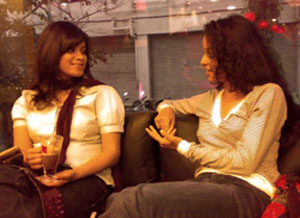 Luckily, some people are taking notice and trying to change their behavior. More and more young people are creating technology-free spaces and times while socializing, instead of tolerating when their friends or parents tune them out—a practice with tremendous benefits for all.

Employers are also taking note of problems with technology at work, as studies reveal the importance of social connections in job performance. In one study, employees wore devices that allowed researchers to measure how much social interaction they had with other employees during their workday, both on and offline. Results showed that those people who had more face-to-face conversations at work demonstrated higher productivity and less stress, while their online conversation had no impact on these.

Parents also should take heed of the research. Too often children are ignored by their parents, who turn to cell phones rather than giving children the attention they need to learn social and emotional skills. Even young toddlers are sometimes entertained with cell phones, depriving them of their most basic need for attachment to the adults in their lives. Infants deprived of eye contact and faced with a parent’s “still face” [the face turned toward a phone] “become agitated, then withdrawn, then depressed,” writes Turkle. “These days, neuroscientists speculate that when parents caring for children turn to their phones, they may ‘effectively stimulate a still-face paradigm’…with all the attendant damage.”

We would all be wise to consider more carefully how we behave around technology, and Turkle includes a list of guidelines that can help us gauge how to use cell phones wisely to avoid missing out on important social connection. Here are some of her suggestions (paraphrased):

Luckily, it’s not too late to change the path we are on, because we are resilient as a species. Even small breaks from technology can help restore conversation, if we take the initiative. Turkle calls upon us all to do so, writing, “This is the wrong time to step back. Those who understand how conversation works—no matter what their ages—need to step up and pass on what they know.”

After reading Turkle’s book, I found myself on a return flight trying to engage again with a young passenger sitting next to me, but to no avail. He spent the flight staring out the window, playing with his cell phone, and answering my attempts at conversation with short, abrupt answers.

But, at the very end of the flight, I learned from him that he’d traveled in Iran and participated at a conference in Washington DC on the Iran nuclear power pact, where he’d been lobbying for peace in the region. That’s something, right?

Still, imagine what I might have learned by talking in more depth with this young man about his experience. That would have required a conversation!