Last fall at Berkeley High School in California, students learned about a private Instagram account “featuring racist, anti-Semitic, and ableist memes created by their peers,” according to a news report.

“The account was reportedly called ‘I Hate Jews’ and included posts featuring swastikas drawn over students’ photos, anti-black racial slurs, students doing the Nazi salute, and derogatory references to people with disabilities. One post was reportedly a screenshot from the app ‘Find My Friends,’ where a [student] had set his home address to Auschwitz.” 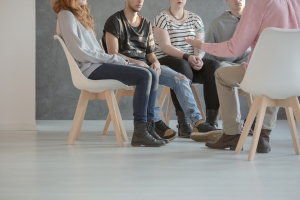 By now, stories like this are familiar. Racist images and hate speech messages buzz through students’ cell phones. Some students click “like,” or make comments; others simply delete the messages. Eventually, the posts are discovered by the students targeted—or by others from their community—filling them with outrage, fear, or despair.

Though events like this may garner a flurry of media attention and a demand for action from parents, for targeted students and their families this is actually nothing new. It happens all the time, and they feel powerless to make it stop.

What can schools do to prevent students from using social media to perpetuate racism? And how can students who were targeted feel safe in the school community after an incident like this?

One answer may be restorative justice (RJ)—an umbrella term for practices aimed at changing our responses to crime and various forms of harm.

In supportive processes called Restorative Community Conferences (also known as Harm/Peacebuilding Circles), those who did wrong are able to admit to mistakes, take responsibility for the harm they caused others, and make amends—rather than simply facing punishment. Targets of harm receive a full hearing of how they’ve been impacted and a chance to determine what’s needed to restore their sense of community, safety, and belonging. RJ processes can be opened up to all who are interested or impacted in the issues, who can bring their context and knowledge and can help collectively envision needed changes in the school environment.

When done well, restorative responses to bullying in schools have the potential to be very effective in changing behavior and improving campus climate. The entire school community can gain more understanding, empathy, and closure from discussions of how they engage with social media, and the impacts of their actions on others.

At Berkeley High, targeted groups of students were alarmed to find out that both the meme creators and those who had “liked” and commented on the posts sat with them in classes and were, in some cases, their friends. This led to the sense that Berkeley High was not the haven of diversity and inclusion that many hoped it was.

How could this happen? Some answers are found in research regarding the adolescent brain. As cognitive neuroscientist Sarah-Jayne Blakemore and others have argued, adolescent brains are not yet fully developed, leading to worse decision making, less inhibition, and less self-awareness and awareness of others. As a result, young people have a more difficult time with navigating risks and taking other people’s perspectives.

While some students who produce or participate in hate speech online may be acting with real intentions to engage in significant harm and violence, others may simply be clicking “like” as a way to engage in positive feedback with friends. Blakemore emphasizes that peer interactions are highly rewarding for teens, and that can increase the amount of risk a teen is willing to undertake, especially on the internet.

It’s reasonable to assume that not all teens who click “like” or share an offensive meme are fully formed racists, sexists, or anti-Semites; but it’s also clear that they are experiencing a serious “empathy gap,” failing to consider the real-life impact of their actions on others. These students need more, not less, attention from schools, in terms of both social-emotional learning and education on social justice issues.

Caught in a crisis, many schools adopt a zero-tolerance approach and simply suspend or expel those involved to stop the behavior and restore a sense of safety at the school. But these short-term fixes have unintended consequences. Quickly expelling students may inadvertently over-punish some, resulting in resentment or even lawsuits, thereby increasing the empathy gap. Meanwhile, deeply troubled youths are pushed out into circumstances that only sharpen their desire to commit further harm and violence.

What restorative justice can do

More research is needed to make a strong case for using RJ after a hate speech event specifically. But current research suggests that when RJ processes are done well, all parties can experience an increased sense of safety, fairness, accountability, and closure, increased social-emotional learning, and a greater possibility for real changes in behavior.

In one study of 18 college campuses, participants who experienced a Restorative Community Conference were 20-30 percent more satisfied with it than with a conventional conduct process. They reported that these conferences were fairer, helped everyone better understand the perspective of those who’d been affected, and provided a stronger sense of closure.

Another study found that most victims of hate crimes can experience intense relief through face-to-face meetings with those who harmed them. While not right for everyone, these meetings give those who are well-prepared a chance to ask questions about what happened, get a sense of people’s motivations, explain how they have been impacted, and articulate what they need to move forward. Similar benefits arose from a community-focused restorative response to a hate crime in Eugene, Oregon.

A large-scale 2005 pilot initiative involving 18 schools in Scotland concluded that RJ is more effective than other forms of discipline. Schools that used peer mediation, mediated conversations in classes and elsewhere, restorative conferences and circles, RJ for those being suspended and upon re-entry, and a general school-wide commitment to a “restorative philosophy” experienced enhanced learning and a greater sense of responsibility and empathy among students.

Fortunately, the Berkeley Unified School District had committed to building an RJ infrastructure and hired a seasoned RJ coordinator, Jose “Eddie” Estrada, for the high school. With community trust for the process, the school quickly embraced a restorative approach, while keeping the community informed of its RJ plan—all key elements needed for successful outcomes.

Schools with RJ structures in place can move quickly to de-escalate tensions. The first step is to recognize and acknowledge the full impacts of the harm that the offensive speech caused, and to discuss with targeted communities their needs for immediate safety and potential repair. Next, RJ practitioners can identify pathways for people to take accountability and show willingness to make amends. This usually involves community members, parents, teachers, and others coming together to discuss their needs and the resources they can bring to the table.

Estrada met multiple times with the students who had harmed, asking them to reflect on what had happened, who had been impacted and how, and what they needed to do to make things right. Through these meetings, those responsible for the posts and others who liked or shared them worked on apology statements that demonstrated empathy and an awareness of how their actions impacted peers.

Within the large and busy school, it was challenging to identify individual “victims” of hate speech, since whole communities had been targeted. So, Estrada worked with student organizations to invite students of Jewish heritage and members of the Black Student Union who were willing to participate by speaking for themselves and representing their communities. Eventually, people came together in a series of highly facilitated and intense circle processes where students read apology statements, discussed impacts, and articulated their needs.

According to participants, it was only when the students who had created the posts heard directly from their peers that they really understood how their actions had impacted them. Groups also discussed greater cultural changes needed at the school, and Estrada continued to meet with those who had created the offensive memes over several months to monitor their progress.

If the goal of RJ is true transformation and the cessation of harmful behavior, one study suggests that it’s important to provide this kind of intensive, supportive engagement with those who’ve harmed to help them gain perspective on the roots of their prejudices, anger, and other emotions. RJ practitioners must work to establish a trusting relationship and refrain from labeling and moral condemnation. Communication at every step is critical, and it can be challenging to balance privacy and confidentiality with the need for information, to counter speculation and hearsay.

Though the school gathered data about the outcomes of the process, the results remain confidential. However, anonymous students shared their views of the experience:

“As a participant, I learned and saw the other person’s side of the story, and with time understood what they were thinking and doing in their time of wrongdoing.”

“I think if nothing happened, then they would’ve never understood what they did was wrong. They apologized and showed up at the Black Student Union meeting on their own and they easily could’ve not gone. It took some time for them to truly [understand] the pain they gave to others and how that pain is different from someone getting teased.”

“I went into the process feeling very angry and unsympathetic. I feel that I came to more truly understand what it means to make change. The most valuable thing I learned was that expulsion and punishment is not the best way to go about solving a situation of hurt/ignorance/lack of empathy or caring for others; instead, mutual understanding is.”

Will these restorative circles prevent new incidents at Berkeley High? Only if the school continues the conversation and builds on the knowledge generated so far with concrete actions for prevention and education.

But there is hope. Schools that take a proactive approach to online hate speech and harm and use restorative processes can lessen the damage done, help increase student empathy, and rebuild their community. We owe it to our students to give them that chance.