Nearly one in four teenagers is bullied every year. Our choice to forgive bullies—as teens or, later, as adults—is intensely personal, not one that any scientific study can answer for us.

A new study by researchers at Macquarie University in Australia provides one consideration (among many) to inform the decision. But the results are mixed: While forgiveness can help us feel better, the researchers conclude, it can also be a stressful process—one reason why choosing to forgive is so difficult. 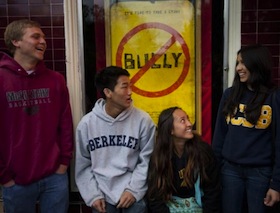 They recruited 135 students who, in the past six months, had experienced bullying—meaning that they were repeatedly hurt by someone who had power over them, and they didn’t know how to escape the situation. Guided by an audiotape, they visualized a recent bullying incident in detail; then, they answered some survey questions about their thoughts and feelings.

Next, the participants were split into three groups. Another audiotape asked them to imagine one of three different outcomes of the bullying: forgiveness, avoidance, or revenge.

In the forgiveness group, participants imagined forgiving the bully and feeling empathy for him or her. The avoidance group visualized being in a happy place, far away from the bully; in effect, they distracted themselves with positive thoughts. In the revenge group, participants imagined taking whatever form of revenge they desired. As they did this, researchers measured electrical activity on their skin with electrodes. Then, all three groups answered the survey questions again.

The researchers were expecting forgiveness to be most beneficial across the board, but that wasn’t exactly the case.

In fact, forgiveness and avoidance seemed to show similar effects: In both groups, participants’ negative emotions decreased over the course of the experiment. Participants who practiced forgiveness or avoidance didn’t feel stronger after the experiment, but they did fare better than the revenge group—whose sense of empowerment, self-esteem, and belief in their ability to cope with the bullying all went down.

But imagining forgiveness proved to be the most stressful of the three outcomes, as measured by electrical activity on the participants’ skin. As they visualized forgiving the bully, the forgiveness group calmed down more slowly than either the avoidance group or the revenge group.

Past research has uncovered the long-term benefits of forgiveness, including better physical and mental health and more positive relationships. In the context of bullying, young adults who are more forgiving tend to engage in healthier coping strategies, exhibit less social anxiety, and experience less hurt when reflecting on the experience.

Yet this study sheds light on the short-term: What happens today, when we make the choice to forgive, to distract ourselves from our suffering, or to seek vengeance? What makes us feel better now?

Here, in contrast to previous research, forgiveness appeared to be stressful—leading the researchers to hypothesize that bullying is a special case. Forgiveness “is a process that involves directly facing the hurt within oneself,” they write, and bullying—with the persistent sense of powerlessness that comes with it—“may represent a unique category of harm.” Instead of soothing, then, forgiveness may initially create tension in the face of certain wrongdoings.

Ultimately, the researchers recommend a mixed strategy. Avoidance, while calming in the short-term, isn’t good for our psychological health in the long run. The best approach may be avoidance now and forgiveness later, keeping ourselves relaxed and secure until we feel strong enough to face the pain.