As companies debate the impact of large-scale remote work, a new study of over 61,000 Microsoft employees found that working from home caused workers to become more siloed in how they communicate, engage in fewer real-time conversations, and spend fewer hours in meetings. 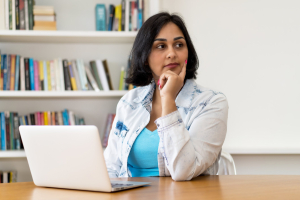 The study, published recently in the journal Nature Human Behaviour and coauthored by Berkeley Haas assistant professor David Holtz, made use of data from before and after Microsoft imposed a company-wide work-from-home mandate in response to the COVID-19 pandemic. The findings suggest that a full-time remote workforce may have a harder time acquiring and sharing new information—which could have implications for productivity and innovation among information workers down the road.

“Measuring the causal effects of remote work has historically been difficult, because only certain types of workers were allowed to work away from the office. That changed during the pandemic, when almost everyone who could work from home was required to do so,” said Holtz, who conducted the research as an MIT Sloan doctoral intern at Microsoft, and cowrote the paper with Microsoft colleagues Longqi Yang, Sonia Jaffe, Siddharth Suri, and seven others. “The work-from-home mandate created a unique opportunity to identify the effects of company-wide remote work on how information workers communicate and collaborate.”

The analysis was based on anonymized data describing the emails, instant messages, calls, meetings, and working hours—all stripped of their content and identifying information—of the overwhelming majority of Microsoft’s U.S. employees.

Holtz, a faculty affiliate at the Berkeley Institute for Data Science and research affiliate at the MIT Initiative on the Digital Economy, said that while the pandemic offered a rare opportunity to study the impact of firm-wide remote work, significant effort was required to understand the extent to which changes in behavior were caused by remote work in particular rather than the upheaval of the pandemic itself. After all, workers suddenly found themselves navigating shelter-in-place orders and supply shortages, caring for children home from school or vulnerable relatives, and coping with general stress and anxiety.

Microsoft, where 18% of employees were working remotely before the company issued its work-from-home mandate, offered the opportunity for comparison. The authors separated out the effects of remote work from other effects of the pandemic by using a statistical technique to compare those Microsoft employees who were already working from home with those who abruptly shifted online during the pandemic.

The researchers had access to anonymized data on employees’ roles, managerial status, business group, length of tenure at the company, and what share of their coworkers were remote prior to the pandemic; they matched groups of workers with similar observable characteristics. They also used aggregated weekly summaries of the amount of time workers spent in scheduled and unscheduled meetings and calls, the number of emails and instant messages they sent, and the length of their workweeks, as well as monthly summaries of workers’ collaboration networks.

Among their key findings:

“The fact that your colleagues’ remote work status affects your own work habits has major implications for companies that are considering hybrid or mixed-mode work policies,” he said. For example, having one’s teammates and collaborators in the office at the same time improves communication and information flow for both those in and out of the office. “It’s important to be thoughtful about how these policies are implemented.”

This article was originally published on Berkeley Haas News. Read the original article.