The rise of the Internet has made remote work more possible and more desirable. Today, a quarter of Americans work for other people from their home, not an office. Employees seek out remote work for the autonomy and flexibility it provides, while employers offer it to cut costs and attract more talent.

But does remote work make us happier? 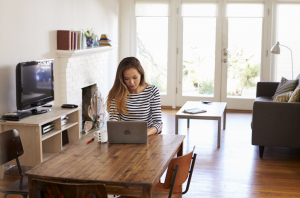 According to the research so far, working from home involves tradeoffs. On the plus side, remote workers tend to be more satisfied with their jobs; feel less time pressure, exhaustion, and stress from meetings; and experience less work-life conflict. But they also have a lower sense of inclusion and get less feedback and social support.

In other words, remote workers may feel better personally, but their work relationships seem to suffer. As a longtime remote worker myself, I get to sleep later thanks to my nonexistent commute, and my cat is always nearby for comfort when work is challenging. But I always feel a little wistful when I see my office colleagues planning birthday celebrations or happy hours that I can never attend.

If you’re a remote worker—or have some on your team—how can you address this pitfall? Communicating over technology is fundamental to the experience of remote work, and how we communicate may have a big influence on our workplace relationships.

Here are a few research-backed strategies for turning technology into your ally rather than a source of frustration and disconnection.

1. Be mindful of how you communicate

When teams include a mix of office and remote workers, one of the dangers is that they will become divided, creating an “us vs. them” mentality.

A 2013 study showed how these divisions can develop from the way the two groups communicate digitally. Researchers recruited student participants and split them up into teams of 10 people, with five in the same room and five “remote” (working alone in separate rooms). After just over an hour, they found that communication differences had emerged.

The “remote workers” wrote longer messages, with more positive expressions in them: more politeness, humor, friendly chat, tips, and nicknames. They tended to express their identity more, give more reasons for their actions, and talk more about reciprocity, among other differences.

On the other hand, the “office workers” were less likely to read and write messages that weren’t strictly necessary for the task at hand, perhaps due to their challenges juggling in-person and virtual interactions.

The researchers speculate that these differing ways of using technology could serve as a “faultline” between the two groups: a difference that could lead to division and conflict. If an office worker sends a terse message to a remote worker, for example, it could be perceived as rude or dismissive, because there’s no smile in the hallway to supplement it.

How a message is perceived depends on not just the content, but also the medium. In one study, participants imagined receiving the exact same performance feedback by email, on paper, or face to face. While they believed the feedback would be respectful when delivered in person, it was perceived as aloof, cold, and even cowardly over email.

Researchers suggest that explicit policies for communication could help prevent misunderstandings and conflict. In addition, we could all bring a little extra mindfulness to whom we’re communicating with and what their context is.

“Start to become very intentional about how you communicate and why,” advises developer and longtime remote worker Shane Dowling. “You begin to appreciate how excellent the bandwidth of face-to-face conversations is when it’s gone.”

2. Set expectations for technology use

Remote workers are distant from their office, in space and sometimes even in time. The typical advice is to communicate more to close that distance.

But research suggests this inclination might be off-base. Both the bad and the good of being a remote worker—higher satisfaction and lower stress, work-life conflict, and exhaustion—seem to all be directly related to the less frequent communicating they do. A 2012 study found that the more remote workers used instant messaging and email, the more stress they felt from interruptions, and the lower their sense of belonging and attachment to their organization. And, surprisingly, remote workers who exchanged more communication didn’t see it as any more personal, warm, immediate, or interactive.

“Teleworkers feel less identified with the organization when constant connectivity threatens the expected benefits of their work arrangement,” the researchers write.

Those expected benefits include interruption-free afternoons and flexible schedules, the ability to hit the gym over lunch or pick up a child early from school. But as many remote workers discover, their schedule isn’t as flexible as they expect it to be. Some feel like they have to be on-call at all times, ready to respond to timely messages or help with last-minute emergencies.

As a result, researchers have found, remote workers sometimes develop tactics to communicate less rather than more. Some turn off their phone, sign off email, or even disconnect from the Internet in order to carve out those long stretches of focus they once dreamed of. Others take deliberate steps to mislead their coworkers, setting their status to “in a meeting” or turning on an email auto-responder when they need to feed the kids or go grocery shopping.

The phenomenon of bosses wanting more communication and employees wanting less isn’t unique to remote work. The difference is that expectations can be less clear to remote workers—who can’t look around and see what time everyone arrives in the office, how often they leave their desks, how long their lunch breaks are, and what time they clock out. Remote workers may also be hesitant to set boundaries, particularly if (as invisible members of the team) they feel like they constantly have to prove themselves.

The researchers behind a 2017 study suggest that managers and employees should agree on expectations for technology use and availability. For example, one Fortune 500 company implemented ‘‘quiet time,” scheduled times of day when employees couldn’t interrupt each other. If managers aren’t proactive in setting these guidelines, remote workers can ask for more clarity—instead of both sides guessing what the other one expects.

A few weeks ago, one of my remote coworkers reached out through email to say she’d had a dream about me, and she asked how I was doing. I shared something that had been preoccupying my mind, and she offered some empathy and a virtual hug. It took all of a few minutes, but it was a meaningful interaction—and research shows that social support like this can help combat disconnection in remote workers.

In a 2016 study of more than 800 remote workers in New Zealand, for example, those who felt more socially isolated—left out of activities and meetings, and missing face-to-face contact—were also less satisfied with their jobs and more stressed.

But their isolation went down the more their supervisors and peers offered social support. Supported employees said that they received more information, advice, and feedback; felt like help was available when they had problems; and believed the organization really cared about their well-being. Other research suggests that people who get more social support at work feel less exhausted.

These findings point to the need for casual, informal interactions among remote workers and other employees, which can be facilitated by technology—a kind of virtual water cooler.

“Teleworkers are constrained in their freedom to ‘shoot the breeze’ with co-located peers,” write Martha J. Fay and Susan L. Kline in a 2012 paper. But satisfying, informal interactions with coworkers could go a long way toward remote workers feeling a greater sense of belonging and commitment to the organization, they add.

For example, my partner’s company uses the Slack app to communicate digitally—and coworkers can join channels where they chat about everything from puppies to plants, anime to hip hop, board games to Beyonce. It helps when leaders encourage this kind of interaction, which might be seen as unproductive but is actually a cornerstone of work relationships.

Technology is a fact of life for many office workers today, but it’s the water that remote workers swim in. “It’s almost as if in the remote world needs are amplified,” writes management coach Victor Lipman for Forbes. “Sound practices that are important when working in proximity become absolutely vital from a distance.”

The truth is that we could all use a little more mindfulness, clarity, and connection at work. And the good news is that we can use technology to facilitate these goals rather than their opposites.