I still remember the time I tried to comfort one of my best friends when her father died. Because I’d lost my own parents years before, I thought I understood her pain. But, when I offered sympathy, she balked. Her father’s death had been transcendent, filled with love and family connection. She didn’t feel pain; she felt at peace. 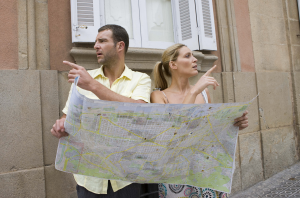 Trying to see where another person is coming from is often touted as a key to empathy. If we imagine ourselves in their shoes, the thinking goes, we’ll be able to predict their feelings and their behavior, bridging the gap between self and other. This is considered a skill—sometimes called “theory of mind”—that begins in childhood and develops throughout our lives, helping us to navigate social situations gracefully.

But a newly published study suggests that trying to take another perspective may be less beneficial than we think—at least when it comes to truly understanding another person. The alternative? Direct questions and answers. If people can’t read each other’s minds, then we need to use our words.

The limits of perspective-taking

Researchers Tal Eyal, Mary Steffel, and Nicholas Epley ran multiple experiments testing whether “putting oneself in another’s shoes” makes people more accurate at predicting the other person’s feelings or thoughts. They asked participants to guess how someone was feeling by looking at their eyes or to spot whether smiles were fake, among other tests. Some participants were first asked to take the perspective of the person in the test before making predictions. Others were given instructions like being told to concentrate hard, or to empathize with the other person, or to imitate the expression on the other person’s face—alternative strategies that researchers think might help with mind reading—while others didn’t get instructions.

After analyzing the results and aggregating them, the researchers found that people who were explicitly told to take the perspective of another did no better at accurately reading another person than any of the other groups—and, in some cases, they did worse.

“People tend to think they’ll be more accurate if they engage in perspective taking than if they don’t,” says Epley. “But, contrary to expectations—what might seem common sense—perspective taking doesn’t work the way people expect it would.”

Perspective taking did, however, make people become less egocentric—meaning, less likely to project their own feelings or thoughts onto others—and helped them question the accuracy of their guesses. Still, this greater self-awareness did not lead to greater accuracy.

“I think this finding highlights what perspective taking does—it shifts your perspective away from yourself and toward a different person,” says Epley. “But you may end up relying on different information—using stereotypes more, for instance—when judging somebody’s experience. And that’s not more accurate.”

What good is perspective taking?

Still, these initial experiments were all done using artificial tests. Could perspective taking increase accuracy in the real world with people you meet or already know well—like a spouse? The researchers decided to find out.

Over several experiments, they asked different pairs of people to take each other’s perspective—and then guess their partner’s preferences or opinions about things like movies, art, jokes, videos, social issues, or their own performance in a simulation. The participants were also asked how confident they were in their guesses and how well they knew the person whose opinions they were trying to predict.

Again, the results showed that people actively taking the perspective of another did no better than those not given that instruction—again, they did worse. How long the participant had known the other person was irrelevant.

“People might presume that perspective taking would be more effective when considering your friend or spouse or someone you know,” says Epley. “But, even there, we didn’t find it to be helpful.”

Of course, these results don’t mean perspective taking has no value, says Epley—just that it may not have the value we think. Rather than helping us gauge another person’s experience, it may simply help us to care more about them.

“What I’d say from the literature is that perspective taking may strengthen social bonds,” he says. “Whether that shows up in ways that we think of as good is a different question.”

For example, says Epley, consider the outcome of putting yourself in the shoes of a serial killer or a member of ISIS, where that might make you feel closer to them or like them more. “Is that a good outcome? That’s not so clear to me,” he says.

Epley believes that, too often, psychology researchers interpret their findings from their own particular valuative, moral, or political standpoint. He also suggests that some of the research on perspective taking has suffered from conflating increases in caring about others with understanding their viewpoints accurately.

“Often, it is implied that putting myself in your shoes is a good thing and helps me understand you better; but we just don’t find evidence of that,” he says.

Want to know what someone’s feeling? Ask them

In a last experiment, Epley and colleagues tested another strategy. Before predicting another person’s preferences, they asked participants either to take their partner’s perspective—that is, imagine how they’d feel—or to simply pose direct questions about what movies, art, and so on, they liked.

Unsurprisingly, those who got more information were better able to predict preferences on the later tests. However, the participants were no more confident in their predictions than other participants, suggesting that people overestimate the value of perspective taking—and undervalue direct communication.

Epley points to another recent study where some participants thought that they could predict how someone was feeling by watching their faces as they reacted to a video that was emotionally evocative. But those people were actually less accurate than another group who saw the exact same video (as opposed to watching the faces of others as they saw the video). In other words, seeing the same images led people to extrapolate the emotions of others from their own—even though they believed seeing the faces of those others would lead to more accuracy.

“People misunderstand what the most effective strategies are for understanding someone else,” he says. “You’re worse off going with your gut and trusting your intuition, yet that’s what people value.”

Though it may seem that Epley believes humans are hopelessly incompetent at social interaction, he insists he’s not. In fact, he says, we’re the most socially sophisticated species on the planet. The problem is hubris—thinking we understand people better than we do and jumping to conclusions that are unwarranted.

Practically speaking, we’d do better at understanding others—whether a spouse or someone on the other side of the political spectrum—if we simply asked them about their perspectives and listened, says Epley.

“Becoming really good at interpersonal understanding doesn’t require becoming a better guesser, it requires becoming a better journalist,” he says. “Learning how to put people in a situation where they can answer questions you pose to them directly, honestly, and openly. That’s the key.”

I wish I’d realized that before sympathizing with my friend. Instead of assuming that I knew how she felt, I should have just asked: “How are you feeling?