We often emphasize the importance of keeping cool in a crisis. But sometimes coolness can give way to detachment and apathy.

We saw a perfect example of this in the response to Hurricane Katrina, whose devastation was amplified enormously by the lackadaisical response from the agencies charged with managing the emergency. As we all witnessed, leaders at the highest levels were weirdly detached, despite the abundant evidence on our TV screens that they needed to snap to action. The victims’ pain was exacerbated by such indifference to their suffering. 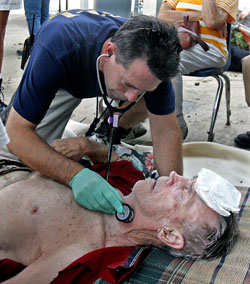 So as we prepare for the next Katrina-like disaster, what can the science of social intelligence—especially research into empathy—teach policy makers and first responders about the best way to handle themselves during such a crisis?

This brings me to psychologist Paul Ekman, an expert on our ability to read and respond to others’ emotions. When I recently spoke with Ekman, he discussed three main ways we can empathize with others, understanding their emotions as our own. The differences between these forms of empathy highlight the challenges we face in responding to other people’s pain. But they also make clear how the right approach can move us to compassionate action.

The first form is “cognitive empathy,” simply knowing how the other person feels and what they might be thinking. Sometimes called perspective-taking, this kind of empathy can help in, say, a negotiation or in motivating people. A study at the University of Birmingham found, for example, that managers who are good at perspective-taking were able to move workers to give their best efforts.

But cognitive empathy can illustrate the “too cold to care” phenomenon: When people try to understand another person’s point of view without internalizing his or her emotions, they can be so detached that they’re not motivated to do anything to actually help that person.

In fact, those who fall within psychology’s “Dark Triad”—narcissists, Machiavellians, and sociopaths—can actually put cognitive empathy to use in hurting people. As Ekman told me, a torturer needs this ability, if only to better calibrate his cruelty. Talented political operatives can read people’s emotions to their own advantage, without necessarily caring about those people very much.

And so cognitive empathy alone is not enough. We also need what Ekman calls “emotional empathy”—when you physically feel what other people feel, as though their emotions were contagious. This emotional contagion depends in large part on cells in the brain called mirror neurons, which fire when we sense another’s emotional state, creating an echo of that state inside our own minds. Emotional empathy attunes us to another person’s inner emotional world, a plus for a wide range of professions, from sales to nursing—not to mention for any parent or lover.

But wait: Emotional empathy has a downside, too, especially for first responders. In a state of emotional empathy, people sometimes lack the ability to manage their own distressing emotions, which can lead to paralysis and psychological exhaustion. Medical professionals often inoculate themselves against this kind of burnout by developing a sense of detachment from their patients.

Cultivated detachment in rescue, medical, and social workers can actually help the victims of disaster. Ekman told me about his daughter, a social worker at a large city hospital. In her situation, he said, she can’t afford to let emotional empathy overwhelm her. “My daughter’s clients don’t want her to cry when they’re crying,” he says.

The danger arises when detachment leads to indifference, rather than to well-calibrated caring. Today, we face this problem on a global level. “One of the problems of living in a television society is that every bit of suffering and misery that occurs anywhere in the world is shown to us,” says Ekman—and generally, we can’t do anything about it, at least not directly.

This can make emotional empathy seem futile and hinder the growth of the third kind of empathy, which Ekman calls “compassionate empathy.” With this kind of empathy we not only understand a person’s predicament and feel with them, but are spontaneously moved to help, if needed.

Compassionate empathy was the vital ingredient missing from the top-level response to Hurricane Katrina—and in responses to many other disasters around the world, including the slow-burning disaster of global warming. Ekman calls compassionate empathy a skill, the acquired knowledge “that we’re all connected.”

This can lead to outbursts of what he calls “constructive anger.” In other words, reacting negatively to injustice or suffering can motivate us to work with others to make the world a better place. Just as empathy has its downsides, negative emotions like anger can have upsides. Staying cool in a crisis might bring some benefits. But sometimes we must let ourselves get hot in order to help.