We’ve all been there: Your partner says something that rubs you the wrong way (or vice versa), and you launch into an argument. As you both get increasingly revved up—blood pressure rising, stomach churning, fists clenching—you lose your ability to think straight or see one another’s point of view—a sign that your levels of cortisol, the body-brain’s stress hormone, are running high.

Before you know it, one (or both) of you explodes and says something jaw-droppingly nasty, something you can never take back. What could have been a minor disagreement has escalated into a major conflict, and you both come away feeling hurt, disappointed, and dissatisfied with your relationship. And that dissatisfaction might lead to more—and more heated—conflicts in the future. 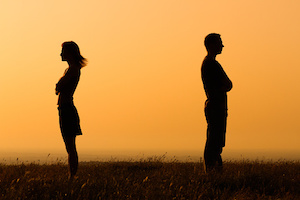 How can couples avoid this vicious cycle?

A recent study offers some hope. Researchers from the University of Wyoming and the University of Oregon observed 88 romantic couples as they discussed a conflict in their relationship. Before and after the conflict, the researchers took saliva samples from both partners to measure their levels of cortisol—an indication of how stressed they were feeling.

Immediately afterwards, the researchers also asked each partner what they were experiencing during the conflict. Specifically, they wanted to know how much the partners approached their conflict with mindfulness, the moment-by-moment, “non-judgmental” awareness of thoughts, feelings, and sensations—an ability to notice and accept what we are experiencing in the present, without judging those thoughts or feelings as “right” or “wrong.”

The results, published in the journal Hormones and Behavior, showed that partners’ cortisol levels generally spiked during their conflict, a sign of high stress. But those with greater mindfulness seemed to recover more rapidly: Their cortisol levels were quicker to return to normal after the conflict ended, suggesting they were keeping their cool. That was true for both men and women.

“Mindfulness helps partners to regulate their own responses and more fully accept one another,” the researchers suggest, “resulting in less negative fallout from conflict when it arises.”

Why does mindfulness carry these benefits? Further analysis revealed that mindfulness during conflict helped romantic partners not take things so personally, regulate their emotional reactions more quickly, and empathize with their partner more deeply. The researchers surmise that while mindfulness helps people remain more engaged during constructive conflict, it also enables them to disengage more quickly from conflicts that become destructive.

How might these findings be applied with couples in the midst of conflict? Over the 20 years that I’ve worked with couples in my private marriage and family therapy practice, I have developed a three-step process for helping partners practice mindfulness to cool down from conflict, usually without even using the word “mindfulness” at all.

To do that, I draw on the two different aspects of mindfulness that the researchers define in their study.

The first is called “attentional mindfulness,” meaning how well each partner can intentionally tune into his or her thoughts, emotions, and bodily sensations during the conflict, without getting too wrapped up in those thoughts or emotions, instead observing them from a safe distance. In the study, people who scored high in attentional mindfulness during the conflict generally agreed with statements like, “I was aware of my thoughts and feelings without over-identifying with them.”

One of my favorite interventions, which encourages attentional mindfulness, is simply to ask, “What are you noticing now?” I find that there can be tremendous benefits simply by shifting my clients’ attention to their own bodily sensations—clenched jaw or fists, tightness in their throat or chest, churning in the stomach—and by labeling their feelings as they arise and escalate: Anger, sadness, fear, and shame are the most common ones. Noting their patterns of thoughts and behaviors helps see them for what they are: habitual and automatic, well-grooved into the brain’s neural circuitry. And like any habit, these patterns don’t need to own or define us; they’re something we can change.

Then I can guide each partner in “attitudinal mindfulness”: being open, interested, curious, accepting of their own experience (the researchers also refer to it as “mindful curiosity”). In the study, partners who scored high in mindful curiosity generally agreed with statements like “I was curious about each of the thoughts and feelings that I was having.”

Noticing and naming sensations, feelings, thoughts—and accepting them as part of being human—helps my clients take their own experience not so personally. They can recognize that when they feel threatened within a relationship that they depend on for safety and comfort, it’s not surprising that they’d demonstrate evolutionarily hardwired and habitually conditioned responses, such as aggression (negativity) or withdrawal (abandonment).

When I can help them see that their reaction is understandable but not inevitable, they can then begin to take responsibility for reacting the way they are—for their own part in the conflict, for any of their own negativity, either aggression or withdrawal. When either partner begins to take responsibility, that can immediately shift the tension in the couple in that very moment.

3. Engage with your partner

It’s important that I do this after having asked each partner to be curious about their own experience first, giving them the chance to regulate their own emotional state to the point that they don’t feel like they have to win their argument in the next two minutes. Then they are better able to maintain that open-mindedness when they focus on their partner’s experience.

Though I’m not measuring cortisol levels in my office, I can immediately see the effects of these applications of mindfulness: more relaxed postures, deeper breathing, more careful listening, more tolerance—and fewer negative behaviors like trying to control, coerce, or attack their partner, or defensively, often passive-aggressively, withdrawing from the conversation.

At best, there’s that magic moment when couples turn to look at each other (rather than making the case against one another to me). There may be a gentle touch on the arm or a passing of Kleenex, or simply a softer gaze and a tentative smile. Then I deliberately ask these two people to pay attention to even this moment in their relationship with curiosity and openness. And to acknowledge that they were able to shift out of a habitual pattern of conflict into a more open, receptive stance.

One significant nuance to the Hormones and Behavior study is that the researchers found that the two different forms of mindfulness—attentional and attitudinal—seemed to provide benefits in different situations.

If a partner engaged in negative behaviors during the conflict—for instance, by showing anger or frustration, by threatening their partner, or by demanding that their partner change their thoughts or actions in some way—the partner who was subjected to those negative behaviors recovered from stress more quickly if he or she scored high in mindful curiosity, regardless of his or her level of attentional mindfulness. Perhaps that was because, as the authors write, approaching the conflict with openness and curiosity “may allow partners to remain connected to their own and their partners’ emotions in a constructive way during conflict.”

However, when one partner simply withdrew and refused to work through the disagreement, the more resilient other partners were those who scored high in attentional mindfulness (though this was only true for men). “It may be that compensating for partner disengagement by distancing from what is happening helps,” they write, “to maintain a sense of equilibrium and/or to empathize with the partner’s perspective.”

The researchers did acknowledge limitations of mindfulness when one’s partner is especially verbally aggressive; in and of itself, mindfulness probably can’t reverse the impact of highly destructive tactics.

Indeed, I have often had to step in and immediately stop verbal attacks and abuse—not allowed—and return each partner’s attention to their own experience in the moment. When safety has been restored and clients have calmed down, I can return them to a process of constructive engagement and discussion.

But in less threatening situations, this new research illustrates how therapists, or even couples themselves, can use mindfulness to cool down a conflict and re-warm up their relationship: When each partner can react with greater equanimity, both partners can recover more easily. They regain a deeper acceptance of the other, recover their perspective taking and communication skills, and thus resolve disagreements more quickly before they spiral out of control.