I thought I’d read everything about mindfulness, but this was news to me: Steve Jobs was a meditator. Back in 1981, long before mindfulness meditation became a popular subject of scientific inquiry, Jobs, the cofounder and public face of Apple Computers, was already practicing mindfulness as a way to calm his mind, stay focused, and feel happier. 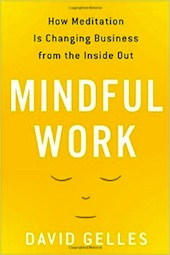 According to David Gelles, business reporter for the New York Times, Jobs is not some lone outlier—the number of business leaders embracing mindfulness is at an all time high, and growing. To write his new book, Mindful Work, Gelles traveled the country, talking to large and small businesses and corporations, to uncover how mindfulness meditation—far from being a fringe practice—is going mainstream.

Part of his book is devoted to recounting how mindfulness practices first became popularized in the west and later became a focus of inquiry for modern neuroscience. He goes over ground that will be familiar to many readers of Greater Good, reviewing scientific studies that suggest mindfulness has many positive benefits, including pain relief and decreasing stress reactivity and depression. He also writes of Richard Davison’s work at the University of Wisconsin, who’s found that long-term meditators have increased activity and grey matter in the prefrontal cortex of the brain—the area responsible for higher order thinking, such as judgment, decision-making, and discernment, as well as pro-social behavior, like empathy, compassion, and kindness.

But while many researchers have shown positive effects of mindfulness meditation, fewer studies have looked at these effects in the workplace. Gelles describes one experiment in which a biotech company in Madison took an eight-week course in mindfulness-based stress reduction taught by Jon Kabat-Zinn and discovered that it helped workers feel significantly less stressed than a control group of co-workers. Perhaps more surprisingly though, the workers who did the course also measurably increased their brain grey matter and showed improved immune function.

Research like this, as well as the personal experiences of various industry leaders, seems to have galvanized companies to try mindfulness in the workplace, and Gelles’ book is primarily a “who’s who” of those companies. We read about the mindful leadership program at General Mills, which is ongoing and has produced a more positive work environment for its employees. And we learn how the health insurance organization, Aetna, came to offer mindfulness to more than a third of its employees in order to decrease worker stress and associated healthcare costs.

According to Gelles, many company leaders embrace mindfulness not just to improve worker health and interpersonal relations, though those are worthy goals. Many are also finding inspiration through a mindfulness practice to take more socially responsible action in their companies.

“The most mindful companies I observed were those whose founders or CEO’s embodied mindful living personally and strived to reflect those same principles in their business operations,” he writes. “They were companies that looked deeply at the work they did and strived to do it with compassion for their employees, respect for their suppliers and partners, and a keen awareness of their impact on the planet.”

For example, Patagonia’s CEO has been fostering a movement of “mindful consumption,” encouraging customers to “be honest with ourselves about what we need, as opposed to what we want.” Eileen Fisher, founder of the clothing line, has been practicing mindfulness for years, and she is constantly looking for more sustainable ways to make products and to share profits and decision-making with employees. And then there’s Facebook, which has tried to increase emotional self-awareness in its users, particularly around photo sharing and taking down offensive photos.

Many of Gelles’ stories are uplifting and inspiring, but I couldn’t help feel a bit jaded by all the corporate hoopla. For example, when I read that Monsanto had at one point also given mindfulness classes to employees, it made me wonder: Is practicing mindfulness always a good thing?

Happily, his reporting is a bit more nuanced than it may seem at first glance. He writes of businesses he visited where mindfulness programs were being slapped together without much attention to program quality and without making any kind of deep impact on business as usual. In addition, he includes a chapter on those who aren’t quite ready to drink the Kool-Aid, yet—people like mindfulness researcher Willoughby Britton of Brown University, who suggests that too many people are reading too much into the research in mindfulness, promoting benefits that are only just beginning to be studied and understood.

Some critics cited in the book charge that if mindfulness is seen only as a benefit to a company’s bottom line, then it’s not fulfilling its purpose, which is personal transformation. Yet, while giving voice to their viewpoints, Gelles ultimately seems to disagree with their conclusions.

“The true purpose of mindfulness is to cultivate compassion for ourselves and others, to free ourselves from this perennial dissatisfaction that makes us feel as if nothing is ever good enough,” he argues. And this, he implies, is something anyone can benefit from—even employees at Monsanto.

If he is right, and if mindfulness is infiltrating the corporate world in the ways he suggests, perhaps there is room for optimism. Business leaders and corporations may not undergo radical transformation through mindfulness meditation. But Gelles suggests that a little mindfulness is better than nothing, and probably won’t hurt.

“If, through practice, employees become a little less stressed out, if relations between coworkers become just a bit more harmonious, if companies are inspired to behave just a little better—that will be a good thing indeed.”