What defines a person? Is it their memories? Their hobbies? Look deeper, argue a pair of researchers—into the soul, so to speak. According to a new study, moral traits like kindness or loyalty are what really constitute someone’s being.

“Over the past few years my research has gradually been shifting toward personal identity, and specifically the question of what makes you you,” Nina Strohminger, lead author of the new paper and a postdoctoral associate at the Yale School of Management, writes in an email. 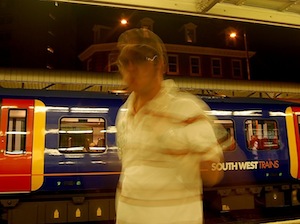 In previous work, she and co-author Shaun Nichols found that moral traits, such as empathy or politeness, seemed to be the most important component of identity. But that research focused on hypothetical situations—if a friend became a jerk, would he or she still be the same person you knew before? The new study “is an expansion of that work that aims to see if this privileging of moral traits extends to a real-world example of radical mental change, neurodegeneration,” Strohminger writes.

Strohminger and Nichols focused on three neurodegenerative diseases: frontotemporal dementia (FTD), Alzheimer’s disease, and amyotrophic lateral sclerosis, better known as ALS or Lou Gehrig’s disease. ALS served as a control since it primarily affects movement, and not memory or moral behavior. Alzheimer’s, for it’s part, primarily affects memory, but also has some impact on moral behavior. Of the three, FTD is the one most likely to have a moral impact—its symptoms include a loss of empathy, poor judgment, and increasingly inappropriate behavior.

Next, Strohminger and Nichols recruited 248 people from online support groups for friends and family of patients suffering from FTD, Alzheimer’s, or ALS, and they asked questions like, “Do you feel like you still know who the patient is?” using five-point scales. Friends and family of ALS patients averaged about 4.1 points on that scale, but the number dropped to 3.8 for Alzheimer’s and to 3.4 for FTD, suggesting that morality was at the core of how people conceived their loved ones’ identities, perhaps even more than memory.

Following up with a more detailed analysis, Strohminger and Nichols discovered that symptoms of declining morality were strongly associated with the perception that a patient’s identity had changed, while failing memory, depression, and more traditional measures of personality appeared to have almost nothing to do with a person’s identity. The only other symptom that had any discernible impact on identity was aphasia, a language impairment.

“Contrary to what generations of philosophers and psychologists have thought, memory loss doesn’t make someone seem like a different person,” Strohminger writes. “Rather, morality… played the largest role in whether someone comes across as themselves or whether their identity has been swallowed up by the disease.”