Like many kids growing up in the United States, I came of age straddling two cultures: that of my family’s country of origin, and mainstream/majority American culture. 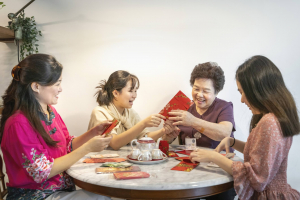 There was a significant Asian American community where I grew up, and among my friends I saw many ways in which families negotiated these two cultures. Some families spoke their first language at home, some didn’t. Some ate their heritage foods for all their meals, some only for special occasions. Some made annual trips to their country of origin, while others never or seldom visited. Mixed into these everyday practices, parents modeled attitudes about race, racism, and the majority culture, verbally and nonverbally.

All of these ingredients in an upbringing make up what social scientists call the ethnic-racial socialization of children—and as two new studies suggest, those choices have consequences for the health and well-being of young people.

“Asian American youth are quite different from each other,” says Tiffany Yip, a psychologist at Fordham University and coauthor of one of the studies. “There are very different ways in which Asian youth form a sense of who they are and how they make sense of the world.”

In a study published by the Journal of Counseling Psychology, Annabelle L. Atkin and Hyung Chol Yoo at Arizona State University surveyed 228 Asian American college students about the racial-ethnic socialization they received from their parents, their understanding of their own racial-ethnic identity, and their feelings of social connectedness.

Findings in the study showed that the “active integration” group reported the highest scores of clarity and pride in their racial-ethnic identity, as well as the strongest feelings of social connectedness. This result suggests to the authors that therapists, social workers, teachers, and others who work with families might encourage bicultural socialization, low avoidance of out-groups, minimization of race, and promotion of equality and cultural pluralism as a way to support the resilience and mental health of Asian American youth.

The authors further note that the patterns of parental socialization identified in these profiles are in and of themselves significant, and emphasized the importance of looking at these multidimensional profiles holistically. Their findings indicate that “despite engaging in the same amount of socialization in several domains, if parents differ in how they engage in other socialization domains, their children may report different outcomes related to racial-ethnic identity and adjustment.”

These findings suggest that Asian American children grow up hearing many kinds of messages about their heritage culture and becoming American, further complicated by the inclusion of messages about race and racism, and that all of these messages function synergistically in the formation of one’s racial-ethnic identity.

There’s no one path to wellness

In another study published last month in the Journal of Youth and Adolescence, researchers from Beijing Normal University and Fordham University surveyed 145 Asian American high school students about their “ethnic-racial knowledge.”

As in the previous study, the researchers asked the students about their parents’ socialization practices and their sense of their ethnic-racial identity—but this study also included questions that measured to what extent these students had internalized the “model-minority narrative,” the myth that Asian Americans are successful by virtue of their race/ethnicity. Their latent-profile analysis also identified three groups:

The researchers also collected data related to these students’ duration and quality of sleep, their psychological well-being (depressive symptoms and measures of self-esteem), their academic performance (grades and school engagement), and delinquency.

In this study, in contrast to the one by Atkin and Yoo, the researchers found no clear benefits to one group across any of these measures of health and well-being. For example, in the areas of self-esteem and school engagement, the salient group scored higher than both the moderate and marginal groups, but neither of the latter groups scored better than the other. The marginal group scored the highest in depressive symptoms, but neither the salient group nor the moderate group scored better than the other. Each group scored higher in some aspect of sleep quality, but no one group had the clear advantage in sleep quality overall.

The complexity of the findings, she says, “underscores the importance of a really nuanced approach to thinking about Asian American youth and their development.”

Like the authors of the previous study, Yip says that regardless of the findings related to the outcomes of these profiles, identifying their patterns is a crucial result of the study, because it reveals the diversity of experiences that Asian Americans bring with them into adulthood. As these profiles illustrate, not all Asian American youth relate to their racial-ethnic identity in the same way.

This may be “a little bit less obvious to people who haven’t really stopped to think about what these model-minority perceptions do in terms of homogenizing the Asian American experience,” says Yip. “So I think it’s incredibly important to show that there are Asian kids for whom their ethnic identity is not that relevant—they don’t think about it, they don’t care about it, it’s not important to who they are. That’s the marginal group.” And then there are some kids, like those in the salient group, for whom their Asian American identity is “really, really important.”

Then there’s the moderate group, at 72% of those surveyed. “What’s interesting,” Yip says, “is that middle group that’s sort of average on everything—that’s actually the biggest group. I think there’s a tendency for non-Asian people to see Asian people as only Asian, but these data are telling us that there are Asian youth for whom being Asian is like, meh. It’s part of who they are, it may not even be that important.”

This is an important thing to understand, she says, not only for clinicians, but for anyone who interacts with Asian American youth “on a daily basis, in their role as educators, neighbors, friends, sports coaches.”

So how can Asian American parents optimize the health and well-being of their kids? Which families of my childhood were getting it right? As both studies show, when it comes to racial-ethnic socialization, there isn’t just one prescription, or pattern of messages, that best serves all or most kids.

And as is true about most aspects of parenting, it’s important to keep in mind that every child is different, says Yip—even when it comes to teaching about racial-ethnic identity. She continues:

As parents, it’s really important for us to recognize what our child brings to their own socialization and to be flexible and adaptable enough to use that individuality that they’re bringing, to tailor our parenting approaches, whether it’s around issues of culture, ethnicity, race, discrimination, whatever it is, that we have some tools that allow us to be adaptable and responsive to the unique needs of each child.