Like many people my age, I had a father who went to work every day and a mom who stayed home—a traditional arrangement. My mom raised the kids, cleaned house, and handled all the family social arrangements; my dad was the breadwinner for the family. 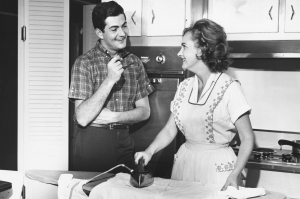 These days, this division of labor is less common—at least in some countries. Since 1970, the percentage of families in the United States where both parents work has increased from 49 percent to 66 percent, with a 20 percent drop in the number of households where only the father works. European countries, too, have seen increasing trends toward dual-income households, as has Japan.

As women have entered the workforce in increasing numbers, this change has wrought both increased power for women and growing pains for dual-income couples. Instead of having a designated “admin” coordinator at home, as wives once were, many working couples must negotiate splitting up household and childcare duties, which can ultimately lead to conflicts.

So how are couples navigating these changing norms, and how is it affecting their well-being?

Research (most of which has involved heterosexual couples) suggests that even when women work outside the home, they are still shouldering more of the household load. And that affects their mental health, their partner’s mental health, and the state of their relationship. But it turns out the story is even more complicated than this: It’s not just the actual division of labor that seems to matter, but also partners’ beliefs about what it is and should be. Understanding this could have important implications for couples, helping them to better negotiate household labor and enjoy happier and healthier marriages.

The current state of marriage (in)equality

While more men take on childcare and housework than ever before, women continue to perform more of the physical and emotional labor in their families.

For example, women in dual-income families are more likely to be in charge of creating and maintaining a family schedule and tend to manage the social lives of their families more than men. One study found that women tend to plan their family’s time together—like outings and vacations—and to work more during that leisure time (caring for the children, cooking, etc.) than their male partners.

Women are also more apt to take on the burden of reminding men to complete household chores than vice versa—perhaps because of cultural expectations that suggest women are in charge of the house. When men do issue reminders, it’s more likely to be for situations where completing a chore will benefit them personally rather than benefit their partner—for example, reminding her to stop by the store to pick up his favorite cereal.

As researcher Sharon Bartley found, not all chores are created equal, either. It’s important to distinguish between those that are mundane and don’t require a lot of effort or challenge—like doing dishes—and more challenging chores that allow for some autonomy—like putting together a new piece of furniture. People tend to be more depressed when they do the former, which (in many cases) are still considered “women’s work.”

The effects of inequality

With the division of labor often disadvantaging women, this has consequences for their well-being. Women who take greater responsibility for home admin—especially related to making sure the kids are doing alright—tend to feel more personal strain and are less satisfied with their marriage than those whose admin is more equal.

While housework is unpleasant for people of both genders, women who are overloaded by it actually experience more depressive symptoms. This may be due to the emotional burdens rather than the physical burdens of managing social life and childcare. In fact, as one study found, women and men who feel responsible for household tasks—not those who actually spend more time doing them—have worse cardiovascular health.

Indeed, in another study, dual-income parents spent equal time thinking about household chores and childcare—but mothers were more distressed by these thoughts, feeling a “double burden” of being responsible for both work and home life management.

Researcher Karen Kramer says that this may be due to how working mothers “do gender.”

“Many working mothers invest more in their kids and give them more time just to make sure that they are not penalizing them for having their own career,” she says. “Mothers have a ‘second shift’—as Arlie Hochschild calls it—where they work when they get home and compromise their leisure time.”

It’s not just inequality but the perception of unfairness that hurts couples—the men as well as the women. Studies suggest that when people are dissatisfied about the labor division, marriages are likely to suffer. Couples are often less distressed when there is more egalitarianism around housework.

“Whether you or your partner is doing more than your fair share of the housework, the effect is roughly the same: You experience more negative emotions”

“Whether you or your partner is doing more than your fair share of the housework, the effect is roughly the same: You experience more negative emotions,” says Kathryn Lively.

Beliefs about equality may matter most

Although inequality seems to be problematic for couples’ well-being in general, this isn’t always the case.

All couples live within societies with social and cultural expectations for how they should divide their lives. According to the research, couples who value equality or a fair division of labor are more impacted when those expectations aren’t met than those who share more traditional values.

“It is not surprising that women who value more equity in the division of labor but do not have support from their partners are less satisfied,” says researcher Brian Ogolsky. “Essentially, these women are valuing equity but getting less than what they bargained for.”

But values also seem to matter in and of themselves. One study by Ogolsky and his colleagues found that when both members of a couple agree that household labor should be divided equally, they are happier than couples who have conflicting beliefs around equity. For women, this agreement affects how they feel about the quality of their marriages—even more so than whether or not tasks are actually shared equally. In other words, it’s particularly relevant to women what their partners believe, not just what they do.

Though marriages can still be satisfying if the division of labor is not equal, having conflicting beliefs can be problematic.

“Consistency in beliefs is more important than the beliefs themselves,” says Ogolsky. “Couples will do better if they communicate about the division of labor and work to finding mutual ground.”

Believing in a traditional division may have a downside, though, when women need to contribute financially to their households. A study by Kramer and her colleagues found that as a working mother’s share of her family’s income increased, she was more likely to be depressed, while the opposite was true for fathers: the greater their contribution, the less depressed they were. But women who valued equity did not experience this drawback.

“When mothers are more egalitarian, it buffers them against depression symptoms—perhaps because it allows them to be good role models for their kids,” says Kramer. “Those with more traditional gender roles, who perceive their main roles as being at home, will have more depression if they work.”

As societal norms change, more women may expect equal sharing of unpaid labor and become disappointed or upset when that doesn’t exist. And it isn’t always the fault of the spouse—as men may not receive paid childcare leave from their employers, and teachers may reflexively contact mothers when planning parent-teacher conferences. All these inequities in treatment reinforce the expectation that women—and not men—are responsible for managing unpaid labor, which adds to their burden.

So, how do we move forward in this changing environment? It may come down to individual women standing up for themselves and demanding more equality in their marriages. Or, it may be necessary to make changes at the social policy level. After all, research suggests that when countries adopt policies aimed at supporting working parents, both women and men seem to benefit, which would likely improve marital happiness.

In the meantime, at least the research is clear on some things: Fairness matters and congruent beliefs matter. And, as gender roles change and people’s economic realities change, couples are going to need to have more conversations about how they organize their daily lives together, if they want to stay happy.

“Everything doesn’t have to be equal—you know, we’re changing the same number of diapers—but couples have to have the sense that there is a fair division of labor,” says Lively. “The reality is that both parties actually benefit from feeling like they’re doing their fair share.”