Last month, we invited you to take a quiz measuring your level of mindfulness. The quiz, based on work by researchers at Drexel University and LaSalle University, gauges how much you maintain a moment-to-moment awareness of your thoughts, feelings, bodily sensations, and surrounding environment; it also examines how much you can accept these things without judgment—without believing, for instance, that there’s a “right” or “wrong” thing to be thinking or feeling in a given moment.

So far, more than 1,200 Greater Good readers have completed the quiz, and (not surprisingly), you’re a pretty mindful group. The median score is 84 out of 100—firmly within the “high” range of mindfulness scores.

After analyzing the results, we saw some noteworthy trends:

• The strongest link in the data was between mindfulness and meditation: The amount you meditate strongly predicts how mindful you are; the more you meditate, the higher your mindfulness score is likely to be. People who meditate daily scored about 15 percent higher on the quiz than people who never meditate (see graph below). 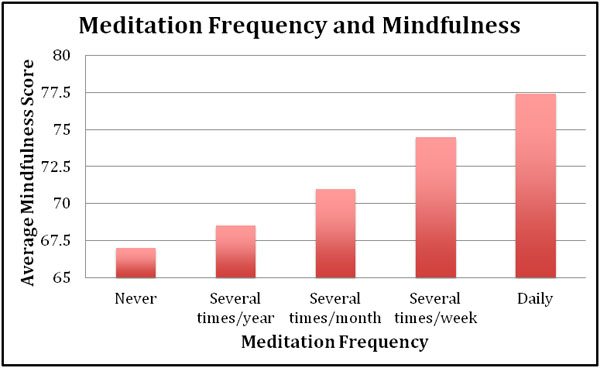 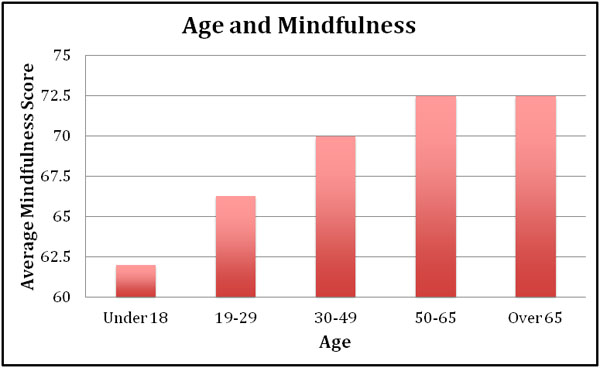 • Just in case you’re wondering: Age still predicts mindfulness even after controlling for meditation frequency, and vice versa. That is, people who meditate more showed higher mindfulness regardless of their age, and people reported greater mindfulness as they aged regardless of how much they meditated. That said, we did find some evidence that meditation is more effective at increasing mindfulness for younger people—but it’s hard to say for sure without considering other factors, like: Do young and old people meditate the same way?

• People who have been married—even if they’re now divorced or windowed—are on average more mindful than single people.

And one thing we didn’t find: a link between mindfulness and the number of children you have. While there was some evidence suggesting that people with more kids are more mindful, that seemed to be explained by the stronger link between mindfulness and age: Obviously, people who have more kids are on average older than people who don’t have kids, and we already found that older people are more mindful. Upon further analysis, there is no evidence that having kids makes you more or less mindful, and mindful people don’t seem any more likely to have kids.

How do these findings strike you? Do they seem surprising, absurd, true to your own experience? Weigh in with a comment below.

Keep an eye out for our new quiz on trust later this week. And if you still haven’t taken our quick mindfulness quiz, click here to get started.

(Special thanks to the GGSC’s Gregg Sparkman for his help analyzing our data!)

I truly did not expect to hear that men meditate more - not because they are not enlightened, but because I’d think it would strike some men as “girly”. Although now that I think of it, most of my yoga teacher friends are men but the classes are mostly women. The kid aspect did not surprise me at all. It does not take any degree of mindfulness or any other state of mind to have offspring, after all.

Regarding yoga, I wonder if that could be considered a form of meditation.

I’ve been meditating for 30 years. It saved my life and I taught Mindfulness to my son as a child. When he was older, he learned to meditate. Mindfulness helped him cruise through many traumatic situations without a trace of negativity. I, therefore, wrote and illustrated a series of fantasy/adventures that show kids how to BE HAPPY NO MATTER WHAT! I then created videos of Book One, “Cocovanilla and The Ice Veil” so that more kids can learn Mindfulness. The videos are FREE at this link. http://theiceveiltales.com/Book1Episode1.html. It would be interesting to do a survey with your members to see if kids who watch these videos outwit bullies, concentrate better, and have more compassion.  If nothing else, your members are invited to show the videos to their kids. The more the merrier!

On seeing the second graph, I’m a tad bit happy. Atleast there’s something that older people(50+) have that’s more useful than what youngsters or people relatively younger to them have.
I am not a person who does a lot of(if any) meditation. I believe more in rigorous training such as gymming & running. I haven’t been able to find any good comparisons as to whether gymming is better than meditation or vice versa.
However, the more I read this article, the more am I curious about it’s credibility.
Any scientific sources would be appreciated.
Thanks.

I found this post to be VERY interesting. Makes alot of sense.