As Thanksgiving approaches, kids may start hearing and thinking more about gratitude at school. Maybe they’ll make handprint turkeys and write something they’re thankful for on each feather, or do something similar. Sure, it’s a nice exercise, but does being grateful really make a difference for kids?

Previous research clearly shows that it does. Practicing gratitude increases students’ positive emotions and optimism, decreases their negative emotions and physical symptoms, and makes them feel more connected and satisfied with school and with life in general.

But most of these studies have been done with upper-middle-class students in middle or high school. The results raised the question: Would these findings hold true for other types of students, particularly younger kids or kids in high-risk situations?

Two new studies find that gratitude is associated with real positive effects in the lives of these kinds of kids—enough to suggest that it should be a focus for students all-year round.

Jeffrey Froh is a pioneering researcher of gratitude in youth. He and colleagues tested a new kind of gratitude curriculum for elementary school children (ages 8 to 11), the youngest studied thus far.

First, children learned about the three types of appraisals that make us feel grateful:

After one week of daily half-hour lessons, these students showed significant increases in grateful thinking and grateful mood—meaning that the lessons worked. Also, when all the children were given the chance to write thank-you notes to the PTA after a presentation, the students wrote 80 percent more notes than kids who didn’t receive the lessons, showing that their enhanced gratitude translated into more grateful behavior.

In the second part of the study, researchers delivered the curriculum over five weeks, with one lesson per week. The students’ outcomes were tested right after the program ended and then several more times, up to five months later.

Compared to kids who didn’t get the lessons in gratitude, these children showed steady increases in grateful thinking, gratitude, and positive emotions over time. In fact, the differences between the two groups were greatest five months after the program ended, indicating that the gratitude lessons had lasting effects.

Overall, this study suggests that even young students can learn to look at the world through more grateful eyes—and that they may become not only more appreciative but also happier as a result.

In another recent study, Mindy Ma and colleagues looked at gratitude in a very different kind of population than those used in previous youth gratitude studies: African-American adolescents (ages 12 -14) in low-income, low-performing urban schools. 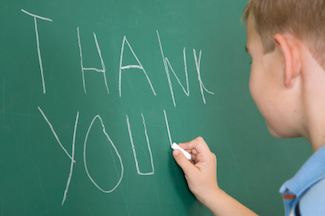 They wanted to know if, in this kind of high-risk environment, gratitude would help protect them from stresses they faced at home and school. The researchers surveyed almost 400 students from three different middle schools to see if they felt grateful emotion in response to things others do that benefit them (which researchers call “moral-affect” gratitude) or if they tended to focus on and appreciate the positives in our lives and the world (called “life-orientation” gratitude for short).

The researchers found that those who were more likely to feel grateful to others also scored higher on academic interest, grades, and extracurricular involvement; those who appreciated the positives in general scored lower on risky behaviors like drug use and sexual attitudes and activity. One factor, positive family relationships, was associated with both types of gratitude. In other words, at least for this group of students, moral-affect gratitude seemed to enhance the positive conditions of their lives, while life-orientation gratitude seemed to buffer against some common high-risk pitfalls.

Of course, this study couldn’t determine whether gratitude actually caused the good outcomes (or vice versa). But it did provide promising evidence that gratitude can play a critical role in protecting at-risk adolescents’ from the difficulties of their lives, possibly by broadening their mindsets and building their personal resources and coping skills.

Future studies should include experiments with programs—such as Froh’s new curriculum, perhaps—to test the effects of teaching gratitude in at-risk populations as well. Which might give us all something more to celebrate on Thanksgiving!