Did I scare you?

No? Let’s try this: Scientists currently predict global sea levels could rise up to 1.5 meters by 2100, a process that could drown cities and trigger widespread human famine and wildlife extinction.

Scared? You should be—and hopefully that little stab of fear and dread compels you to make some lifestyle changes and influences your votes.

But I don’t want to talk about doomsday. I’m here to talk about Halloween. And my real point is that real fear does not feel good. So why are we so prone to giggling at this kind of fright-based Halloween tomfoolery?

The answer, says the research, is that we need holidays like Halloween and Dia de los Muertos because they ritualize our fears, mainly of death. “Halloween rituals turn horror into play, death into levity, gore into laughter,” says UC Berkeley psychologist (and GGSC co-founder) Dacher Keltner.

So Halloween isn’t just a way to sell candy and inappropriately sexy Halloween costumes. Here are five scientifically validated reasons for you to treat-or-treat.

1. It’s a ritual and rituals keep us together

Think, for a moment, about how often you interact with your neighbors. If you’re the average American, you probably don’t know most of the people on your block.

If you have kids, trick-or-treating is a great way to get to know the neighbors. Even if you don’t have kids, putting a goblin out on the lawn and sitting on your stoop with a bucket of candy might enhance your block-level social capital. There are stacks of empirical studies that say this kind of social connection makes you happier, kinder, and healthier—and that these benefits can spread from person to person. As Steve Almond writes in his marvelous book Candyfreak, “There’s something incredibly liberating about a holiday that encourages children to take candy from strangers.”

The rituals of Halloween also make people pay more attention to candy, and paying attention makes candy taste better, according to one recent study. This leads us to our next item…

My nine-year-old son actually provided this as the main reason why humans need Halloween—“I need candy, Daddy!”—and my own extremely scientific survey confirms that 10 out of 10 kids like candy.

I assumed that there must be a good evolutionary reason for this—and some googling did turn up evidence to support my son’s claim. For example, an ounce of dark chocolate every day can reduce your risk of cardiovascular disease, and chocolate has been shown to boost mood-enhancing chemicals in the brain like endorphins and serotonin.

I could cite more science, but you know what? I’d eat chocolate even if it depressed the heck out of me, and so would my son. So, on behalf of my family: Thank you, Halloween, for the treats!

Most holidays contain some level of ritual—and varying degrees of stress.

Take Thanksgiving, that special time of the year when you get to sit across from your mother-in-law and hear about all the ways you weren’t fit to marry her precious child. Halloween also entails some stress, and we are often willing pay for stressors like jumping with fright in a haunted house.

Thus Thanksgiving and Halloween triggering similar shots of cortisol—but we’re talking about two very different kinds of stress, and one kind is definitely better than the other. Why would we pay for Halloween thrills and dread Thanksgiving dinner? To explain why some kinds of stress are good for you, here’s a brilliant scientist (with a scary beard):

4. We need to pretend 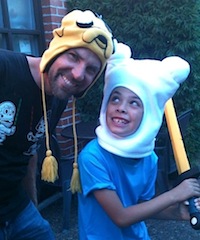 The author and his son modeling their Halloween costumes.

This is another reason cited by my son, who this year is dressed as Finn the Human from the cartoon Adventure Time. If you must know, I will dress as his bro, Jake the Dog.

But he dresses up and pretends all year long, and I go along with him—even when his imagination takes us to dark places.

University of Oregon psychologist Marjorie Taylor has found that kids often create pretend characters who do sinister, mean, and even violent things. “Like adults who think things through before they act, this gives children an opportunity to play it through before they encounter the situation in real life,” Taylor once told me. “If something is bothering you, you can control it or manipulate it in the world of pretending. That’s a way of developing emotional mastery.”

We can all agree that death sucks. But I think we can also agree that if we’re going to die, we may as well eat a lot of candy before we go.

Halloween is one of many “memento mori” traditions designed to make death just a little bit more fun—and provide an age-appropriate hint to children about an inescapable fact of life, which is that life ends.

This has emotional benefits. As Oliver Burkemen notes in his essay “The Positive Power of Negative Thinking,” one study found that walking through a graveyard made people 40 percent more likely to help a stranger than walking down an ordinary block; another found that visualizing death can lead us to become more grateful for the things we have in life.

Ultimately, the playfulness of Halloween helps us to prepare for things that are genuinely scary, like climate change. Trick-or-treating is a little light exercise that builds up the emotional strength we need to face our fears.