Rituals are an integral part of many kinds of meals. We clink our glasses with cheer before a drink, bow our heads with grace before a meal, and sing hearty renditions of “Happy Birthday” before cutting the cake. 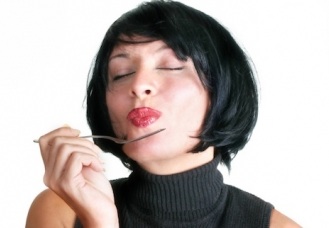 Researcher Kathleen D. Vohs conceived the study when she noticed the way people swirl wine before taking a sip, or shake a packet of sugar before dumping its contents. She caught herself performing many of the same rituals with her own food.

To discover the psychological roots of these behaviors, she and her colleagues conducted four experiments.

In the first, some participants were instructed to unwrap a chocolate bar in a systematic, ritualistic manner. The ritual-performing participants found the candy more flavorful, savored the chocolate for longer, and were willing to pay more for it than those that had not performed a ritual. In other words, ritual performers enjoyed and valued their chocolate more. The researchers put carrots to the same test, and they uncovered the same effect.

But what about ritual makes chocolate and carrots alike taste so much better?

The researchers thought that ritual might prompt people to pay more attention to their food, making them feel more personally involved in the experience of eating. This increased involvement in food, they hypothesized, would help people tune into its flavor.

To test this, in a third experiment researchers asked participants to follow certain steps as they made lemonade themselves—and they had participants watch someone else perform the same steps. In both cases, participants then drank the lemonade. The result? Performing the ritual made the lemonade taste better, but just watching the ritual did not. The researchers followed up with a questionnaire that surveyed personal involvement in ritual. Analysis of the data verified that rituals made people become more personally involved in the eating experience, which let them enjoy and value it more.

In the paper, the researchers wonder whether rituals might work the way they do by triggering mindfulness, prompting people to bring non-judgmental attention to their eating experience. Research on mindful eating has demonstrated a myriad of positive mental and physical health benefits, helping people to become more attuned to internal and external hunger cues and develop a healthier relationship with food.

Vohs and her colleagues are excited about the possibility of applying rituals to other desirable behaviors in order to enhance our experience of them, such as exercising or practicing safe sex. As the authors write in the paper, rituals “might serve as a covert means to get people to do a little more of what makes life worth living.”