According to a new Gallup survey of over 2,000 college graduates, 80 percent believe it’s very or extremely important to have a sense of purpose in their work. Yet fewer than half of them actually succeed in having this experience. 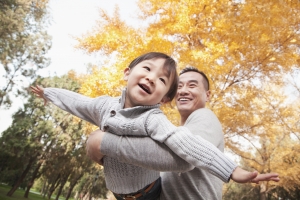 It’s not surprising that young people are seeking purpose—adolescents with greater purpose experience greater well-being and hope. Purpose is an abiding aim that directs your behavior, provides a sense of meaning in life, and (under some researchers’ definitions) matters to the world beyond the self.

Generally, we think of purpose as something young adults discover in life by exploring their own interests and values and the different ways they can contribute to the world. But research suggests that some of the foundations of purpose may be built in early childhood. The positive or negative experiences children have may play an important role in whether they grow up to have a sense of purpose at all.

Some research suggests that negative experiences early in life can hinder our development of purpose, even decades later.

Psychologist Patrick Hill and his colleagues studied over 3,800 primarily white adults ages 20 to 75. They reported on any early childhood adversity they had experienced—including experiences of emotional abuse, physical abuse, socioeconomic disadvantage, family structure disadvantage (for example, parents divorcing or dying), and health disadvantage (for example, poor early physical or emotional health)—as well as their sense of purpose as adults.

Hill and his colleagues found that people who recalled greater adversity in childhood—in particular, greater health disadvantage—had a decreased sense of purpose.

“Individuals who experience early adversity are not ‘doomed’ to a lower sense of purpose later in life,” the researchers write. “Instead, early adversity may be better viewed as a potential risk factor.”

For some people, though, hard times in childhood end up inspiring them to pursue a particular calling, like caring for kids or eliminating poverty. “Some individuals may gain greater clarity on their life direction upon reflection on these adverse events,” Hill and his colleagues explain.

Even conflict in relationships between parents and children could affect their sense of purpose as they grow older.

Another recent study by Hill and his colleagues involved over one thousand children between six and twelve years old, and their mothers and fathers. The researchers followed the families until the children reached their twenties. They were primarily white, working-class families who lived in the Pacific Northwest of the United States.

The results? Children who had more early conflict with their mothers—based on their own opinions, not their parents’—had a decreased sense of purpose in early adulthood regardless of how stressed and satisfied with life they were.

“Frequent conflict saps the child’s energy and enthusiasm, and in turn likelihood to live an active, engaged lifestyle, which has been suggested as a primary pathway by which individuals find what makes their lives purposeful,” explain Hill and his colleagues.

An earlier study by Hill and his colleagues explored how a different aspect of the parent-child relationship could be important to purpose.

Over 500 primarily white undergraduate students at a Canadian university, ages 17-30, filled out online surveys about their relationship with their parents, as well as their sense of purpose.

Overall, the study found that students who had a higher sense of purpose tended to have more secure attachments to their parents and fewer problems with the separation-individuation process. In turn, they also had a greater sense of mastery and control—they thought they were the authors of their own future.

These findings are consistent with another study, where more purposeful men tended to remember living in more positive childhood environments—ones that included caring relationships and helped them develop trust, autonomy, and initiative.

According to Hill and his colleagues, “Having a sense of purpose could assist emerging adults with the process of defining themselves while maintaining adaptive relationships with their parental figures.”

Other positive experiences in childhood may set up children for purpose later in life—including early memories of nature’s beauty.

Researchers Riichiro Ishida and Masahiko Okada recruited nearly 70 college students in Japan who were between 18 and 35 years old. Participants completed questionnaires about their purpose and their early life and youth experiences, including nature-related questions like “Do you remember having feelings that were associated with the beauty of nature?”

The researchers found that more purposeful students tended to have stronger memories of the beauty of nature during early childhood and early adolescence.

Research is still needed to further explain this relationship. Because purpose goes hand in hand with humility, which we may feel when in nature, it may be that this diminished sense of self makes room for children to “engage with some aspect of the world beyond the self”—a foundational part of purpose.

Finally, not only do early childhood experiences seem to affect whether children develop purpose at all as they get older, those experiences may also influence what kind of purpose they gravitate toward.

Nine 12 to 23 year olds who had an exceptional sense of purpose participated in a study by Kendall Cotton Bronk. Her team interviewed them for three hours on three occasions over five years.

“According to the exemplars, they would not have discovered noble purposes in the areas they did had they not been involved in those areas early on, often as children,” explained Bronk. “As parents, teachers, and other adults interested in fostering noble purpose among youth, then, it is important to expose young people to a wide variety of activities.”

For example, one 18-year-old in the study shared that she first became interested in cancer research at the age of five after an experience with the American Cancer Society, when she volunteered for a fundraising event selling daffodils at the mall. Another 18-year-old in the study whose purpose was related to a commitment to create and promote jazz music shared, “I got into music when I was nine because my next-door neighbor . . . had a piano and he taught me how to play Pink Panther and Greensleeves and stuff like that.”

These results complement another study by Ishida and Okada that found that adults with stronger memories of succeeding and receiving praise from parents, teachers, friends, and neighbors during early childhood tend to have a stronger sense of purpose.

Young children may not immediately recognize that a certain activity is very important to them. Instead, their commitment may grow gradually over the course of participating in the activity, as they discover their strengths and the ways they can contribute to the world.

Taken together, all these findings suggest that there are a multitude of early childhood experiences that may shape how adolescents and adults develop a sense of purpose. Early personal resources like good health, strong social connections, and positive engagement in activities and the natural world tend to support children to develop meaningful life goals. Parents can help their children start exploring pathways to purpose early on to help avoid the post-college void of purpose that many young people are experiencing today.