More and more schools are teaching students how to manage their emotions, in hopes that these skills will improve students’ behavior and relationships with peers and teachers. There is also evidence to suggest that emotional intelligence—or EI—is linked to academic success.

While it would be such a relief for schools if helping students become “good” was as simple as teaching them emotional skills, a recent study suggests that there’s a lot more to acting morally than knowing how to manage your emotions.

In this particular study, researchers in the UK found that young adult women who ranked high in EI also rated higher in delinquent behavior. While the authors of the study were not definitive about why this surprising finding might have occurred, the study does serve as a wake-up call to those of us who teach emotional skills. It seems that EI without a moral foundation can be down-right scary.

How do we teach kids to be good? 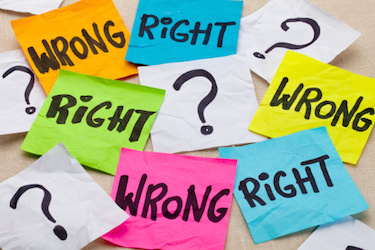 This is not an easy question to answer and it’s one that religious leaders, philosophers, researchers, and educators—not to mention parents—have struggled with for a long time. For many years, scientists such as Jean Piaget and Lawrence Kohlberg promoted the idea that moral development was solely a cognitive task. In other words, a student’s moral judgment could be improved by engaging in activities like ethical dilemma discussions.

But as science began to embrace the important role emotions play in our life, researchers suggested that our emotional intuitions and actions regulate our ethical behavior more than our cognitions. Therefore, went the argument, our emphasis should be on helping students cultivate a healthy emotional life.

So which should teachers and parents focus on for a child’s moral development? Reasoning or emotional skills? As is so often the case in research, it turns out to be both, particularly as neuroscientists have found that the moral development of children involves both emotional and cognitive brain mechanisms.

For example, one study found that young children, in comparison to adults, have stronger activations in regions of the brain associated with emotion when exposed to moral situations, meaning they experience more personal distress. Teaching them to calm their emotions by developing cognitive skills, such as re-framing a situation, will help them make better decisions when faced with a moral dilemma.

But we still have to go a step further because we can’t assume that a child (or adult for that matter) will make the correct moral choice once his or her emotions are calmed. This is where the importance of moral discussion comes in.

In her new book, Neurobiology and the Development of Human Morality, moral development expert Darcia Narvaez argues that if a person did not grow up in a safe and nurturing environment—developing an insecure rather than secure attachment—then he or she is more likely to view the world as an unsafe place. Insecurely attached people are more likely to adopt a “safety ethic”—a moral mindset in which the need for self-protection overrides prosocial behaviors and emotions.

Someone who operates from a safety ethic may become defensive and belligerent in difficult situations or try to dominate others through humiliation or shame. Or he or she may go in the opposite direction and act submissively or passively towards others as a way of self-preservation.

Who’s to say that the young women in the aforementioned study, the ones who ranked high in both EI and delinquent behavior, weren’t operating out of a safety ethic? Given the high rates of anxiety and depression amongst children and adults in our culture, I would venture that many of us do so, more often than we’d like to admit.

Narvaez suggests that people in a chronic safety mode need help cultivating both emotional and reasoning skills. They need to learn to calm their emotions, but they also need a supportive mentor or group who can help them shift their self-protective beliefs into more trusting and prosocial ones.

So what does this mean for educators?

As I often say, we need to start with ourselves by becoming aware of when our behavior might be stemming from a “safety” rather than “prosocial” ethic. For example, when I find myself feeling less than compassionate, I analyze my thoughts and emotions to see why and sometimes talk it out with a trusted friend. Am I in a rush? Do I feel the person deserved the suffering? Am I overwhelmed by my own emotional response to the situation? Do I feel more powerful than the person needing help? Do I not feel safe? Once I figure out why, then I make the necessary inner and/or outer changes—sometimes easy to do, and sometimes not so easy.

For teachers who want to help students cultivate a moral and emotionally intelligent mindset, here are two strategies that complement the teaching of emotional skills:

1. Teach performance and moral character. Many schools are hopping on the bandwagon to teach “performance character”—qualities such as perseverance, optimism, and creativity—because it has been shown to lead to greater academic success. Fewer, though, are also teaching moral character, which focuses on qualities that enhance ethical behavior, including empathy, social responsibility, and integrity.

The challenge is that performance character by itself is not necessarily good or bad. A person can exhibit great perseverance and creativity, but use it towards bad means—take your pick of corporate scandals to see this in action. To blunt ends-justify-means thinking, schools need to balance achievement-oriented performance character with the ethical orientation of moral character, while also teaching emotional skills.

This is no small finding, given the prevalence of cheating amongst students these days, especially when research has found that students who cheated in high school were more likely to be dishonest in their professional and personal lives as adults.

2. Discuss ethical situations with students. The school that emphasized moral character in the above study cultivated integrity and other moral qualities in their students through a process of reading and discussion. They set aside time each week for faculty or staff members to meet with small groups of students, no more than 10 to 12. During each meeting, students read great moralists such as Gandhi, Aristotle, and W. E. B. Du Bois, and discussed moral strengths such as compassion and integrity and how these strengths applied to their own lives.

For schools or teachers unable to set aside dedicated time to ethical discussion, integrating these dilemmas directly into the curriculum might be the easiest way. One of my favorite examples comes from Marty Rubio, Villa Duchesne and Oak Hill School Social Studies Chair, who, with his colleagues, re-writes test questions to help develop students’ “ethical fitness” and to bring more meaning into their learning. Here are some examples:

In a society that is rife with corporate corruption, school cheating scandals, racial divisiveness, and greed, it is imperative that educators help students cultivate a strong ethical foundation—along with the social and emotional skills needed to act upon that foundation.

We need look no further than child psychologist and Holocaust survivor Haim Ginott’s letter to a high school teacher as a real-life cautionary tale from recent history where educated people without moral grounding went awry (from history curriculum Facing History and Ourselves):

Dear Teacher:
I am a survivor of a concentration camp. My eyes saw what no man should
witness:
Gas chambers built by learned engineers.
Children poisoned by educated physicians.
Infants killed by trained nurses.
Women and babies shot and burned by high school and college graduates.
So, I am suspicious of education.
My request is: Help your students become human. Your efforts must never produce learned monsters, skilled psychopaths, educated Eichmanns.
Reading, writing, arithmetic are important only if they serve to make our children
more humane.
-Haim Ginott