Everyone has a story when it comes to bullying. As a licensed social worker, school counselor, and national educator, I have heard many first-hand accounts of bullying, from triumphant efforts to end unwanted aggression to heart-wrenching stories of relentless torment. I am routinely appalled by how ubiquitous cruelty has become.

Yet, despite the pain, I am hopeful. I believe we have an opportunity to change the culture of bullying among young people and I think the answer begins with those who live and work with young people every day.  It is not complicated policies or grandiose programs that make the most difference, but rather consistent, daily, nurturing acts of reaching out to both children who bully and those who are are the receiving end of cruelty that bring about the most meaningful and lasting change.

Here is an outline of key steps that have the greatest impact on helping kids, drawn from my new book, 8 Keys to End Bullying.

1. Know bullying when you see it 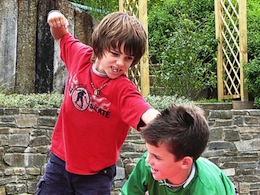 Bullying is clearly defined as having three elements: intentionally aggressive behavior that is repeated over time and involving an imbalance of power. It is most often used to gain social status, to maintain power and control over another, and for peer attention.

In our culture of 24/7 news cycles and social media sound bites, we have a better opportunity than ever before to bring attention to this important issue. But when we overuse the term ‘bullying’ or make it synonymous with terms more related to everyday conflict,  we run the risk of making people so sick and tired of hearing about our issue that it loses its urgency as quickly as it rose to prominence.

It is important to distinguish behavior that rises to the level of bullying from behaviors that indicate rudeness or mean behavior so that teachers, youth workers, and parents know what to pay attention to and when to intervene.  We don’t want bullying in schools to become a “little boy who cried wolf” issue.

Connections with kids are the essential prerequisite for any growth and change an adult can facilitate. When a child perceives that adults in his life are truly invested in his wellbeing and interested in his experiences, he is more willing to talk about what is going on in his life and to be open to adult feedback.

Without strong adult connections, kids that bully can act without the hindrance of adult disapproval, victims feel isolated from sources of potential support, and bystanders have no one to whom they can turn to report bullying behavior.

Adults need to make it easy for kids to talk to them. Maintaining calm, expressing sympathy, thanking the child for having the strength to reach out, encouraging problem solving together, and following up later to make sure a proposed solution worked—those are all ways adults can support kids and nurture relationships that will help stop bullying.

If kids believe they are safe to reach out to adults, and that things will get better if they do, they will feel less isolated and will more likely report bullying.

3. Stop bullying whenever you see it

Most bullying goes unseen by adults—up to seventy-five percent of incidents happen in kid-only locations like the playground, bathroom, or the bus.

But when adults see something happening, they must be ready to intervene. The most effective approach to stopping bullying is often the least wordy one. In many cases, the briefer, the better. Here are some suggested statements teachers can make when they witness bullying:

The benefit of brief statements like these is that they don’t humiliate or alienate anyone. Instead, they let everyone know the teacher is paying attention, and they send a strong signal that bullying won’t be tolerated.

Adults have made a giant misstep in recent years by choosing not to take responsibility for responding to aggression that occurs through technology. School personnel say they can’t do anything because it didn’t occur at school; law enforcement say they can’t get involved unless there’s a clear crime; and parents don’t feel they can keep up with what their kids are doing online. This across-the-board abdication of responsibility by adults have given kids who bully evidence that they can control peer culture online, free and unfettered of adult intervention.

Cyberbullying can be distinctly harmful because it can occur anonymously and cruelty can go viral at the touch of a key. Kids find it far easier to be cruel when they don’t have to lock eyes with the object of their viciousness. There is no safe place for victims, because the online attack can happen without the victim being in the same place as the perpetrator.

One of the most important things that adults can do to prevent bullying online is to maintain strong connections with kids offline. Young people will never feel safe talking to adults about what is happening in cyberspace if their real-world relationships are not already strong.  Parents also play a key role in teaching kids commonsense standards for the use of technology, basing rules on values of kindness and compassion, and enforcing these agreements in consistently caring ways.

SEL programming in schools can help prevent bullying in many ways: by increasing kids’ emotional regulation, by instructing kids on how to manage stress and control their impulses; by increasing empathy; by teaching problem-solving skills; by practicing assertive communication, and by fostering friendship skills. 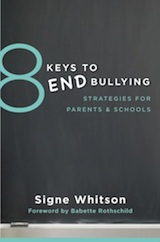 This essay is adapted from 8 Keys to End Bullying: Strategies for Parents & Schools

Research suggests that peers are present during nine out of every 10 incidents of bullying—but intervene on behalf of victims less than 20 percent of the time. When peers do step in to stop bullying, however, the episode stops within 10 seconds more than half of the time. Therefore, it’s incumbent upon adults to figure out best ways to encourage peers to intervene.

For kids to become empowered, they need to believe that stopping bullying starts with them. They must learn to feel a connection to a bullied child, understand that their friendships can endure doing the right thing, know how to use assertive communication, and feel confident that their intervention will have a positive impact.

Kids with high social status often make the best interveners, because of their outsized influence on the peer group and their relative immunity from the backlash of vengeful aggressors. Some of the most effective programs in schools build on this principle, pairing high-status kids with vulnerable peers. This experience benefits both the potential victim, who gains social status, and the high status kid, who learns the benefits of kindness and compassion.

7. Reach out to kids who bully

Because bullying is marked by repeated acts of aggression that intentionally harm others and is committed by individuals who hold more power than their victims, bullying behavior is predictive of troubling mental health and behavioral outcomes, like substance abuse, depression, and criminal behavior. For safety reasons alone, professionals and parents should reach out to kids who bully while they are young and their behavior is still highly changeable.

When approached by adults who are ready to listen, young people who bully tend to talk; when approached by adults who are ready to accuse, they tend to be defensive. Too often what’s meted out to kids who behave badly has more to do with fulfilling an adult’s need to win than with meeting a child’s need to learn, make amends, and grow. Instead of telling kids what they shouldn’t do, it’s more effective to say what they should do—to teach them appropriate social skills and ways of managing conflicts. Punishment alone does nothing to prevent future bullying and can, in fact, aggravate a bad situation.

Many adults who desperately and genuinely want to do right by kids give up on even attempting to manage incidents of bullying because they feel so overwhelmed by the complexity of the challenge. There are other adults who operate strictly from a risk management perspective, going through the motions of intervening in bullying without assessing if their intervention is effective or sufficient.

But this is not enough to keep kids safe. Instead, opening up an ongoing dialogue with kids about social conflicts, friendships, and navigating difficulties they may face is more effective, because it shows you care and that you understand their world.

Maintaining an open dialogue about bullying and making sure we continue to shine a bright light on it is the only way we will bring an end to this long-standing problem. Only by keeping the conversation going will we be able to deter bullying in the future and keep all children safe.