We’ve all heard the stereotypes before. The Greatest Generation is “responsible and hard-working”; Baby Boomers are “selfish”; Gen Xers are “cynical and disaffected”; Millennials are “entitled and lazy”; Gen Zers are “civic-minded.” Even though these stereotypes are frequently called into question, they linger in the mind, fed by media, politicians, and business experts. 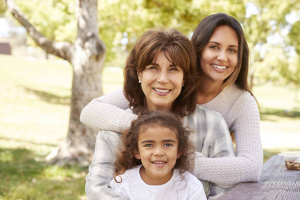 But, while characterizing generations is a common practice, it’s often counterproductive, says Bobby Duffy, director of the Policy Institute at King’s College London and author of a new book, The Generation Myth: Why When You’re Born Matters Less Than You Think. Duffy argues that assigning cohorts of people particular traits misses the importance of outside factors affecting their attitudes and actions. Plus, it takes us down a fruitless path of pitting one generation against another, creating division.

“The generation we were born into is merely one important part of the story, alongside the extraordinary influence of individual life cycles and the impact of historical events,” writes Duffy. “Although it is possible to learn something invaluable about ourselves by studying generational dynamics, we will not learn these lessons from a mixture of manufactured conflicts and tiresome clichés.”

As a course corrective, Duffy provides longitudinal data on a multitude of issues—from obesity to views on pre-marital sex to car ownership and much more—showing how generations respond to different social, health, and economic trends. In this way, he separates out truly generational effects from changes that affect all ages at a particular historical moment or changes that affect everyone once they hit a certain age. This makes for fascinating reading, much of it counterintuitive—and instructive.

How we get generational stereotypes wrong

Part of what drives generational stereotyping is uncertainty of the future and worry that our children will not do as well as we did in life, says Duffy. We look for simplistic explanations rather than exploring complex reasons for a generation’s struggle to succeed, missing out on opportunities to work together to ameliorate present problems or prepare for future disaster.

A case in point is our concern over climate change. Many of us fall prey to the stereotype that younger generations are the most concerned about climate change and are leading the fight against global warming (think Greta Thunberg and her movement). But, when Duffy looks at public opinion, he finds that worry about climate change has been rising among all generations, with very little difference between them. And, while younger-generation activism is certainly important for creating visibility, Baby Boomers may be more likely than younger people to take a stand against global warming by changing their actual behavior.

In other words, our generational stereotypes of selfish Boomers and caring Gen Zers can be misleading. Plus, they can cause people to put too much faith in younger generations, thinking they will solve climate change rather than all of us stepping up to do something.

Another persistent myth—that Gen Xers and Millennials are lazier, more materialistic, and less willing to act responsibly than other generations—obscures more important changes that are happening in society. When you look through the data, it becomes clear these stereotypes are ignoring long-term trends in rising wealth inequality, income stagnation, the need for more (and more expensive) education to compete in today’s economy, and devastating market crashes. What some people call “delayed adulthood” has less to do with personality than external realities, like exorbitant housing costs or limited wealth accumulation. To solve the problem, Duffy argues, we need to get away from blaming the victims and prioritize affordable housing and rent control for vulnerable young people.

Sadly, those solutions are harder to enact than sticking to unflattering stereotypes. Older generations often ignore how much the world has changed since they were young adults, failing to recognize that opportunities they enjoyed no longer exist. It’s easier to rely on our cognitive biases and form shorthand stereotypes of the young, where we “overemphasize personality-based explanations for behavior that we observe in others, while underemphasizing situational explanations,” writes Duffy.

“These blunt characterizations reflect a tendency to pick on younger generations for traits that are created by context,” he adds.

Take the current media frenzy over social media’s impacts on Gen Z. This follows a well-worn pattern: Each successive generation has found some kind of new media or technology to blame for the woes of youth, including books, radio, comics, TV, and now social media. While it’s true that social media use is higher in younger generations than past generations—and that could be tied to problems in youth, including mental health declines—evidence for that is inconsistent.

“It’s vital that we resist the lure of these simple answers, as they are likely to distract us from taking necessary action,” writes Duffy.

Though stereotyping is wrong, Duffy does find actual generational differences in attitudes and behavior that might be instructive. For example, older generations attend religious services more regularly than younger generations, with each generation attending less often than the previous one. With every successive generation, drinking alcohol has decreased, too—one of the most consistent cohort effects discussed in the book. And Gen Zers are reporting more mental health problems compared to prior generations—a trend that may only get worse during the COVID-19 pandemic. 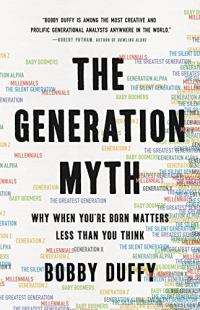 The Generation Myth: Why When You’re Born Matters Less Than You Think (Basic Books, 2021, 357 pages).

Knowing these generational trends exist could help us understand how to tackle issues that affect generations differently, perhaps tailoring supports to their particular challenges. For example, if younger generations don’t find social support by attending religious services, perhaps communities need to provide other spaces for them to connect with others around a shared sense of purpose and meaning.

Still, it’s possible that even these clearer generational differences may lessen when you consider extenuating circumstances—like available alternatives to alcohol for younger generations (such as legalized marijuana) or their willingness to report mental health problems more readily. We need to look closely at the data, as Duffy does in his book, to pinpoint real differences rather than imagined ones. Granted, this may be less eye-catching and click-worthy than media hype, but it could help us identify where the real problems are.

Unfortunately, our work is cut out for us. Stereotypes abound when we don’t have direct contact between different groups of people. And, Duffy argues, the U.S. has become one of the most age-segregated societies in the world, with young and old barely interacting (outside of their families, that is). This is problematic, as intergenerational connection is tied to well-being, and its opposite feeds misunderstanding.

“It’s not intergenerational warfare we should be most worried about, but a drifting apart of age groups,” says Duffy. “This powers the stereotypes that exaggerate the division between generations and leads us to miss out on a host of positive benefits from generational connections.”