Recently, the Wall Street Journal ran an article about how Instagram was affecting teen mental health. In particular, some internal studies at Facebook (which owns Instagram) appeared to confirm that when teen girls used the site, they suffered poorer body image and were at increased risk for depression and eating disorders. 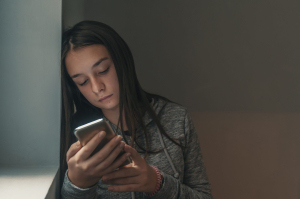 But is social media use itself at fault for making teen mental health worse? While some studies suggest it is, others paint a more nuanced picture, finding it difficult to pinpoint problems with screen time itself versus other factors sometimes associated with social media use that may reduce teen well-being—like cyberbullying or social isolation. Plus, current conclusions are often based on data from a single point in time, which makes it hard to prove that extended screen time actually causes poorer mental health.

Now, findings from an international study on teens add more to this debate and point toward potential guidelines for screen use. Focusing on over 577,000 adolescents from 42 countries across Europe and North America, the study’s results suggest that we might not have to worry about screen time in smaller doses, until it reaches a certain harmful level, and that exercise can play a protective role no matter how much time a teen spends on screens.

For the study, researchers used large-scale surveys four years apart (in 2006, 2010, and 2014). Teens between 11 and 15 years old reported on how much of their free time they spent regularly on screens, watching TV or YouTube videos, gaming, checking social media, chatting or emailing with friends, and surfing the internet. They also reported how many days a week they exercised, how satisfied they were with their lives, and about their mental health, noting how frequently they felt emotionally down, irritable, angry, or nervous, and how often they had difficulties falling asleep, dizziness, headaches, stomachaches, and backaches (physical symptoms associated with poor mental health).

Analyses showed that lower amounts of screen time had no effect on teen well-being. Girls who spent less than an hour on screens and boys who spent less than 90 minutes on screens were not negatively impacted by it. But at higher amounts of screen time, their life satisfaction dropped significantly—they were less happy with their lives, and it got worse the more time they spent. If screen time went above 105 minutes per day for boys or 75 minutes per day for girls, their mental health also got worse.

According to the lead author, Asaduzzaman Khan of the University of Queensland, Australia, these findings support the earlier guidelines issued by the American Pediatric Society, which suggests that teens not spend more than two hours on screens per day.

“If screen time goes beyond about two hours per day, there’s a detrimental relationship with mental health,” he says.

On the other hand, he adds, his study also found that teens who got more regular exercise had greater life satisfaction and fewer physical complaints for both genders. Not only that, the effects were largely unrelated to how much time a teen spent on screens, so that if teens exercised more, it could potentially undo the damage to their well-being that went along with even six or eight hours of screen time.

Khan says that this suggests a two-pronged approach to improving teen well-being.
“If we want to improve kids’ mental health, we need to target both behaviors—to minimize screen time and maximize physical activity,” says Khan. “If we are targeting just one behavior, then it might be a missed opportunity.”

In the study, the greatest life satisfaction was reported by boys who had one to two hours of screen time a day and were active seven days per week, while girls who exercised every day and had less than an hour of screen time fared best—in line with Khan’s suggested fix.

But Khan warns parents and others not to be overly concerned by his results…yet. There are limitations to the study, including uncertainty about the effects of different types of screen time on mental well-being. For example, it may be that scrolling through social media has a very different impact on well-being than playing video games, or that girls do better with one type of digital entertainment than boys. Some of his more current research (not yet published) supports this idea, he says, though clearly much more needs to be done before we can know all of the nuances of this.

Still, it does suggest that parents might want to encourage their teens to lessen screen time in favor of more exercise if they can. He suggests parents consider employing online tools that can alert teens (or anyone) when they’ve reached a reasonable limit on their screen time—such as after they’ve watched an hour of YouTube videos. Or it’s a good idea, he says, to take planned breaks from all screens from time to time—a sort of “digital detox.”

While it makes sense to promote this idea to teens, it may be easier said than done to change a teen’s use of digital media—especially now, when COVID-19 has forced many teens online more than ever. Khan also notes that it’s hard to impose restrictions on teens unless parents are role-modeling good behavior themselves.

“If I’m watching Netflix for five hours, it’s nonsense to assume that my teen is going to go outside and do activities there,” he says. “Parents and kids need to work together on this and figure out how to replace some of their screen time with ‘green time.’”

Schools can also help improve adolescent well-being, he says. Too often, schools rely heavily on digital tools to teach or communicate with students, while not providing enough access to outdoor physical activities. Programs that encourage more exercise—like organizing bike riding commutes to school—could be a plus.

In the meantime, he and his colleagues hope to publish their next study, which may help provide more finely tuned recommendations on screen time, helping pediatricians and parents alike to make smart choices around children’s well-being.

“We are very close to the time when we can make more precise guidelines that consider not only how overall time on screens impacts mental health, but how exposure to different types of screens affects it in different ways,” he says. ”That will help practitioners, parents, and kids understand what limits to set.”