When I was 10 years old, I hated doing the dishes. In an attempt to talk my parents out of making me do this hated chore, I pretended to be ill by hanging my head, sighing, sniffling, and walking lethargically to my bedroom, all to no avail—I still had to do those dishes. 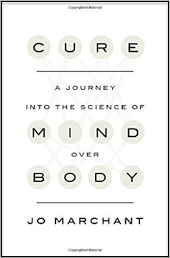 But, the next day, I woke up with the flu —a 104-degree fever and stomach pains to match. Boy, were my parents surprised! And, so was I. But, how many of us have had similar experiences, where our minds seemed to somehow impact our bodies in weird, unexplainable ways? How many of us have made doctors’ appointments only to watch our fevers drop or held our children close and stopped their coughing fits? Clearly, something is going on, isn’t it?

This is the subject of science writer Jo Marchant’s new book, Cure: A Journey into the Science of Mind Over Body. Marchant interviews scientists from around the world, delving into how placebos, hypnosis, mindfulness meditation, and warm social connections affect health outcomes, revealing the complex ways that our brains and bodies interact. Not only does she uncover some pretty fascinating research on mind/body interactions, she also calls upon the scientific community to pay more attention to these effects in order to improve future healthcare.

In Greater Good, we’ve covered the science on mindfulness showing how it impacts psychological and physical health. But I personally found Marchant’s reporting on the placebo effect rather mind-boggling. Apparently placebos (pills or treatments that don’t contain an “active ingredient” and are often used as control conditions in experiments) are not quite as inert as supposed. While many scientists normally assume a positive result from a placebo indicates that people would have gotten better anyway or that their conditions really had no physical basis in the first place, Marchant’s reporting suggests otherwise.

Patients in the first group improved 28 percent just from being in the trial; those in the second group improved by 44 percent; and those in the last group improved by 62 percent —“as big an effect as has ever been found for any drug tested for IBS.” This suggested to the researchers that psychological factors are at work that can be harnessed for treatment—perhaps the mind signaling the body to prepare for healing or to relax enough to let the body heal itself. To Marchant, it also suggests the importance of empathic doctors.

“If an empathic healer makes us feel cared for and secure, rather than under threat, this alone can trigger significant biological changes that ease our symptoms,” writes Marchant.

In another study, children suffering from ADHD were split into three random groups. One group received a standard medication dose for two months; another received the standard dose one month and half the standard dose the second month, and a third group received the same regimen as the second group, but with an added feature: they also took a distinctive green and white capsule alongside their medication that they were told was an inactive placebo. The hypothesis behind this experiment was that, through the power of association, the brain could be tricked into believing that the pill was responsible for the benefits of a full dose.

Results showed that the third group of kids did do as well as the first group of kids, even though their active medication levels were halved, while the second group did not do as well, presumably because they did not have the benefit of the placebo. Although one could interpret these findings as indicative of no real ADHD or ineffective medication, Marchant suggests that this misses the point.

“By using expectation and conditioning together, ethical placebos could potentially help to reduce drug doses for millions of patients around the world, in conditions from pain and depression to Parkinson’s and ADHD,” she writes.

So, what does research like this ultimately mean? The answer is: we don’t know yet. For one thing, there are not enough good studies to be sure of what’s going on, and there is very little incentive to explore these effects further. Pharmaceutical companies have no interest in funding research whose results might ultimately cut into their profits, argues Marchant, and they are the primary funders of clinical trials. Similarly, few scientists are willing to stick their necks out to study effects like these for fear of losing their credibility.

And, there is another concerning issue: the possibility that research like this might prompt people to put too much faith in their mental capacities for fighting illness and to forego important medical treatments. Or, as some scientists warn, showing mind/body impacts on health may lead people to blame themselves for getting sick in the first place—i.e., If only I had been more mindful or compassionate, I would not have had a heart attack.

Clearly this is not Marchant’s intent. Rather than eschew modern science, which has brought us important treatments for many illnesses, she is instead trying to encourage scientists to open their minds. In an ideal world, scientists could test these effects in a more rigorous manner to discover if and when mind/body treatments really help. In many cases, she writes, the effects are probably connected to stress reduction, distraction, or increasing positive emotions, all of which may signal our bodies to release healing hormones or redirect immune-response resources.

But, whatever the mechanism, it would be good for researchers to understand it, and to engage patients more in the process of their healing, she argues.

“Modern medicine’s focus on physical data and objective test measurements has undoubtedly allowed huge advances,” she writes, but “it has also led to an obsession with molecules and biochemical pathways to the exclusion of how we actually feel.”

The evidence of mind-body interactions may be young, but it is growing. Many of the scientists Marchant interviews have found at least some evidence that mind/body treatments impact physiological markers.

For example, one neuroscientist was able to show that people who are fooled through mirrors into believing that a fake hand has been attached to their body will experience decreased blood flow to their actual, hidden hand, causing its temperature to drop—a response similar to an allergic reaction. In another experiment, researchers at UCSF showed that highly stressed mothers had much shorter telomeres—caps at the end of chromosomes which shorten with aging—and less telomerase (an enzyme that rebuilds telomeres) than mothers who were less stressed.

These experiments suggest that decreasing the stress response—perhaps through mind/body therapies like mindfulness, hypnosis, or self-compassion—could actually impact longevity. And it makes a case for providing more support services for those who suffer from undue stress, such as caregivers and people living in poverty.

These physiological impacts will no doubt remain murky if not substantiated by further research. Still, even if they aren’t credible, certainly anything that improves the psychological impacts of illness—by decreasing pain, stress, anxiety, or depression, for example—should be considered more carefully. Patients should not be dismissed simply because their illnesses lack an obvious physical cause or don’t respond to traditional treatments, not when the brain and the body are so intimately connected. If we don’t try to study the mechanisms behind effects like those reported in Marchant’s book—if we merely cast results aside because they don’t fall under our current worldview—we could be leaving a powerful source of healing untapped.

“I am not advocating relying solely on the mind to heal us,” she writes, “but denying its role in medicine surely isn’t the answer either.”