Julia A. faced a triple threat: She was pregnant, obese, and chronically stressed—in part, due to poverty and a troubled relationship with her baby’s father.

These three factors put her at risk for gestational diabetes or hypertension and her unborn baby at risk for potential birth complications and low birth weight. But even with those risks, the stress of Julia’s life undermined her efforts to control her weight during pregnancy. This is no surprise: Studies have found that people under a lot of stress who don’t have the skills to handle it are more likely to overeat, retain fat, and become obese. 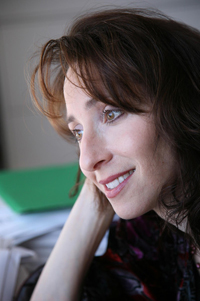 But then Julia began an eight-week course at the University of San Francisco’s Center for Health and Community. Run by Elissa Epel, a researcher who studies stress and eating, the program trains low-income, obese, pregnant women in the skills of mindful eating—using moment-to-moment awareness of thoughts, feelings, and bodily sensations to eat more healthily.

Julia had never heard of mindful eating before starting the program, but she soon learned that there were many benefits. “It helped me to appreciate more the taste and texture of food,” says Julia. “I learned how hungry I really was and how to make better choices around eating.”

Julia says that the mindful eating program taught her to pay more attention to when she was full, which helped with portion control. The breathing exercises she learned in class were very relaxing, allowing her to better handle the stress in her life. And, during her pregnancy she didn’t gain weight…in fact, she lost 35 pounds.

“When you eat slowly, you become much more aware of how much food you eat,” says Julia. “It makes you feel so much better.”

Elissa Epel and her colleagues are conducting studies to discover if a mindful eating program can help women like Julia to reduce their stress and keep their weight gain under control—and the results so far show the program is working. Not only that, the researchers hope to prove that, by giving these women mindfulness training, they are also improving the ability of the women’s unborn babies to manage the stress that affects fat retention, helping to break a cycle of obesity that is often generational.

It’s a line of research whose implications go well beyond the small group under study, to reveal key ways in which our minds and bodies are connected—and how all of us can live healthier, more balanced lives.

Learning to appreciate food
Many of us do not pay much attention to what we eat, shoveling down our meals with little effort to truly taste it. The proliferation of fast and processed food in the United States speaks to how little we pay attention to what our bodies really need nutritionally.

Mindful eating is a way of combating that tendency. Since mindfulness involves learning how to pay attention to your present experience without judgment, it can help one become more aware of hunger and satiety cues, understand how emotions impact hunger, and learn to savor food. Some of the goals of mindful eating programs include helping people have a more positive relationship to food, reducing their stress, and controlling their weight.

According to Epel, stress is a trigger for many women to overeat because it signals the body to produce cortisol, a hormone that both increases high calorie food craving and fat retention. She became interested in how this plays out in high stress environments, like those found in impoverished neighborhoods, and wanted to see how obese pregnant women living in these conditions might maintain optimal weight during their pregnancies.

Her study, called the Maternal Adiposity, Metabolism, and Stress Study—or MAMAS for short—is looking at whether mindful eating can help these women reduce stress and eat more healthily. To date, 100 women have been enrolled in the study—all of them overweight or obese, and living in highly stressful situations.

After initial assessments on their life stress levels, body fat and weight, and mindfulness levels—their awareness of their emotions, ability to accept change, and tolerance for difficult feelings, for example—the women attended the course on mindful eating offered at the Center for Health and Community. They were then reassessed on these measures and compared to a group of about 70 women who are being followed medically in the traditional way—without the mindful eating intervention.

“I’m very excited about this result,” says Epel. “Pregnancy is a critical time and we have a chance to see how malleable obesity is.”

Another study participant, Kendra S., says she learned about the concept of “chasing flavor,” and how often she ate without really tasting her food after the first few bites. By slowing down her eating and understanding her cravings, she had more control over her food intake. She also claims that the mindfulness helped her from making bad choices, like eating at McDonald’s.

“I only ate when I was hungry, or when I made a decision to eat something special, like a little ice-cream,” says Kendra. “The class made me more aware; it made me make more healthy choices.”

Like Julia, Kendra learned that by using the mindfulness techniques—like deep breathing and learning to experience the transience of her emotions “like a train passing through a station”—she could be calmer and cope better with the stresses of her life, like her troubled relationships.

“When you use these techniques, it helps you not get upset,” says Kendra. “I don’t stress out as much any more.”

Passing the benefits to babies
Although Epel’s study has shown that mindful eating can help women like Kendra and Julia with stress and weight gain during pregnancy, she and her colleagues are still assessing whether it can affect the women’s babies as well. 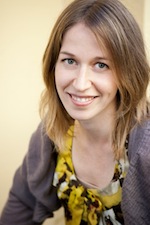 Nicole Bush, a researcher at the UCSF Center for Health and Community. © Credit: Anja Epkes

Nicole Bush at the UCSF Center for Health and Community is now studying the babies born to the MAMAS women to look for those effects—and she and her colleagues have some exciting results to report. So far, 60 of the women in Epel’s study have given birth and had data on their babies collected and analyzed by Bush. That data included birth weight-to-height ratios, body fat levels, and post-delivery complications, as well as an independent assessment within a month of delivery to determine the babies’ “stress reactivity”—that is, the intensity of their stress response.

Bush was interested in measuring stress reactivity, because it plays a role in fat retention—when stressed, people with high stress reactivity tend to crave more calories, especially fats and sugars. Babies don’t think about eating consciously, of course. But their bodies do have to put more energy into stress management if they have high stress reactivity, says Bush, which affects their normal development. It’s as if the body knows it needs to allocate more energy to the stress response system; so it doesn’t have as many resources to devote to cognition and attention.

Preliminary findings on the mother-infant pairs in the study suggest that those offspring born to the mothers who went through the MAMAS program had healthier birth weights and better ability to manage stressful experiences than those who were born to mothers in the control group. Better birth weights translate into long-term health, and lower stress reactivity means less chance of having illnesses like cardiovascular disease, obesity, addictive behaviors, and mental health issues, such as depression, anger, and impulsivity, all of which cost society, both emotionally and fiscally.

But what’s most exciting to Bush is that these changes seem to be happening in utero. She says that her results help show how a baby’s metabolism and stress response may be not just be programmed through genetics, but through some kind of metabolic “communication” between a mother and her unborn baby while the baby is still in the womb.

“There’s something about the maternal hormones and the maternal nutrients during gestation that are communicating and providing signals to the offspring about the environment they are about to be born into,” says Bush. “It’s as if their systems are giving a message to their unborn babies that they are about to be born into a highly stressful environment; so they’d better prepare their metabolisms to deal with that…which generally means greater fat retention.”

Although researchers have found correlations between maternal weight and baby weight and between maternal stress and stress in babies, no one has really looked at the connections between the two or tried to manipulate them using an intervention, says Bush. By starting this far back in a baby’s chain of development—while the baby is still in utero—she hopes that intervening with moms will make a big difference in the future health of at-risk babies, helping prevent them from becoming obese.

“If some of these things are passed on inter-generationally, it’s more optimal to get that baby before their physiology is programmed,” she says.

Epel is particularly excited about Bush’s results. She believes that this in utero translation of stress reactivity to babies could have long-term consequences for their childhoods, creating a positive feedback loop that could impact their future eating patterns, emotional life, and learning outcomes.

“This might be the most meaningful study we’re ever done,” she says. “We could be calibrating the health of these offspring for their lifetime.”

Julia found that the benefits of the mindful eating intervention go beyond giving birth to a healthy baby. The program has also helped her to be more patient with her two-year-old girl. Now if her little girl gets upsets or whines, she can step back, give her daughter a little space, and breathe.

“As a parent, I have way more self-control,” says Julia. “It’s something I can use for the rest of my life.”