I’ve spent a lot of time with Mister Rogers over the last three years as I researched and wrote my book about his life and faith. Throughout, I have been fascinated by the question of why we keep summoning him forth from memory. 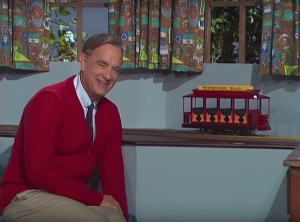 A Beautiful Day in the Neighborhood by Sony Pictures Releasing premiered on November 22, 2019.

For decades, we have recalled Fred whenever something terrible happened in our world, sharing his comforting words and image on social media. Then, in the last couple of years, we’ve dug a little deeper, with documentary and books (and merch!) galore. This week, the fascination seems to have peaked with the release of a feature film, A Beautiful Day in the Neighborhood, starring Oscar winner Tom Hanks. Why do we keep summoning Mister Rogers? And why is now the time for a feature film about his influence?

“We need him now,” people often say to me. “There’s no one like him these days,” I often hear. “If only he were around…” There’s a heavy dose of nostalgia at play here.

But nostalgia, while pleasant, is static. It doesn’t heal any ills or bind any wounds. It certainly doesn’t build neighborhoods of care, which is the work Fred Rogers was all about. Nostalgia suggests that there was a simpler time, that Mister Rogers was a simple man, that Mister Rogers’ Neighborhood was a simple show where we could find respite from political rancor and weaponized fear—if only we could figure out how to get back there. The problem is that the ’60s and ’70s and ’80s and ’90s, the decades when Fred was building and broadcasting his Neighborhood, were not simple. Neither was he. Neither were we.

This nostalgia is so tempting that I was worried about the film. It’s too easy to flatten Fred in memory, to make him two-dimensional and crop him into whatever shape we think we need. I feared Fred Rogers on the big screen might be perfect or saintly (the real one wasn’t), all sunshine and no darkness. And who could blame us, really? So many of us feel like we’re stumbling around in the dark these days, bleary-eyed from the incessant news cycle, wide-eyed with unending worry in the wee hours. We all need a little sunshine.

As publicity for the new movie spread, many of the articles and much of the social media talk focused on one theme: kindness. This year’s World Kindness Day (which has apparently existed since 1998) seemed to be co-opted by Fred. WQED, the television station where he created Mister Rogers’ Neighborhood and The Children’s Corner before it, urged neighbors from Pittsburgh and beyond to wear sweaters in Fred’s honor. A Pittsburgh nurse crocheted tiny cardigans for the newborns in the hospital nursery, and Mrs. Rogers herself visited to ooh and ahh. The same day, the New York Times published a long-form profile of Tom Hanks that focused on how “nice” he is, as if to assure us in advance that he’s worthy of that sweater, those sneakers.

I spent World Kindness Day low-key annoyed. It’s not that I think Our Patron Saint of Kindness wasn’t kind. He was. No doubt. It’s just that I’m not sure “kindness” provides the answer to the question “Why Fred?” or “Why now?” any more than nostalgia does. And I think getting those answers right matters, not just for the sake of faithfully remembering Fred, but for the sake of coming to know ourselves a little better—a kind of growing that would have pleased Mister Rogers.

Here’s the thing: Mister Rogers almost never taught us that we should be kind. There wasn’t much “should” at all in the Neighborhood. The “shoulds” that did subtly emerge were more like suggestions. You might consider sharing who you are through the arts. May I suggest that you find ways to express your feelings? May I remind you, once more, that those expressions don’t have to hurt you or anyone else?

Most of all, more than kindness (which he rarely talked about), more than self-expression and feelings (which he talked about all the time), he told us one thing again and again: You are lovable. He didn’t usually say it quite like that. Instead, he said, “I like you just the way you are,” or “There’s only one person in the world like you,” or “You’ve made this day a special day for me by just your being you.” And he sang it, too. “You are my friend; you are special” and “It’s you I like,” and “I like you as you are.”

Those songs were his original creations over years, and it delights me to imagine him thinking, You know? I think I’ll write a song today. What the Neighborhood really needs—what the world really needs—is one more song about how each person is lovable. He couldn’t stop. He kept on finding another way to say it. And he kept on looking directly into the camera and insisting on it: You—no, really, you—are lovable. I mean it. I hope you know it today and always. I’ll tell you again tomorrow.

Fred didn’t talk much about kindness, even though he was modeling it constantly. And this may have been because he didn’t think you could cultivate kindness by telling people to be kind. Fred believed what a seminary theology professor taught him in the 1950s: When we believe we are good and lovable, we will look on our neighbor as good and lovable, too, and we will treat them as if they are. On the other hand, Fred’s professor taught him, if we feel badly about ourselves, we will see our neighbor through eyes of accusation, and evil (yes, Mister Rogers believed in evil) will spread and thrive.

In other words, we do not act kind because someone told us to. We act kind because we have come to believe that we are lovable, and so we believe our neighbor must be lovable, too. “I like you as you are.” “It’s you I like.” “You are special.”

Right now, at the movie theater and pretty much everywhere else, we are desperately summoning Fred Rogers forth from our cultural memory—but I don’t think it’s because we need kindness. We don’t need instruction in decency. By and large, we are decent. If you don’t believe that, you’re spending too much time watching the news or scrolling Twitter. Go to the grocery store; visit the library; walk down the street. Someone will be kind to you. Almost all of us do it, almost all the time, almost every day.

All these years later, we are drawn to him for the same reason. It is that simple. It is that deep.

The movie—thank Fred, thank Tom—got this blessedly right. When you flock to see it with thousands of your neighbors this week or next week or the next, watch. Count how many times Tom-as-Fred tells his friend Lloyd the misanthrope to be kind. See if he ever so much as suggests that Lloyd help his wife with their baby or hints at how Lloyd should (or shouldn’t) talk to his father. No spoilers here except this one: He doesn’t do it. Not even once. Instead, Tom-as-Fred finds, to quote another song, “many ways to say I love you,” and helps Lloyd summon forth from his own memory all the people who have helped to love him into being.

“Love is at the root of everything,” Fred himself says in last summer’s documentary. “Love or the lack of it.”

In this time that’s as chaotic and unkind and unlovely as any we’ve ever known, here’s the hope: We know exactly what we need. The evidence is in our obsession with this man who told us we were lovable so often that it got weird. Yes, sure, be kind. Keep on being decent. But more importantly, listen to Fred and to anyone else who’s telling you the truest truth. You are lovable. You—really, you—are lovable. You don’t have to spend any more heartache being afraid that you aren’t. You just are. Exactly as you are.