When Stanford University researchers asked people to think about the sensations and emotions of inanimate or non-human entities, they got a glimpse into how those people think about mental life.

What they found is that Americans break mental life into three parts – body, heart, and mind – a finding that challenges earlier research on this topic and could have important implications for understanding people’s social interactions and moral judgments. The paper was published in the journal Proceedings of the National Academy of Sciences. 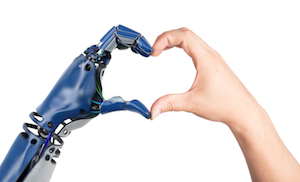 Deep, philosophical questions about mental life, like “What is consciousness?” or “What does it mean to be alive?” are difficult for most people to answer, according to Kara Weisman, a Ph.D. student in psychology and the study’s lead author.

Rather than looking at broad, philosophical questions, Weisman, along with Stanford psychologists and the study’s co-authors Carol Dweck and Ellen Markman, explored how ordinary people make sense of the sensations, emotions, thoughts, and other mental capacities that make up mental life.

The group asked 1,400 U.S. adults simple questions about the mental capacities of different beings. For example, in the first study, half the participants were shown a picture of a robot and the other half a picture of a beetle. They were then asked questions such as, “Is a beetle capable of experiencing joy?” and “Is a robot capable of experiencing guilt?” In total, they asked each participant 40 similar questions, then analyzed how all the responses related to each other.

Those patterns resulted in three main clusters of mental capacities: body (physiological sensations, like hunger and pain), heart (social-emotional abilities, like guilt and pride) and mind (perceptual and cognitive abilities, like memory and vision). These clusters were prominent whether participants judged beings individually, when they were compared directly against each other or when the researchers expanded the cast of characters to include entities like a fetus, a chimpanzee, or a stapler.

A 2007 study from Harvard psychologists has largely served as the standard in mind perception. That study produced a framework with two components: experience (the ability to feel hunger and joy) and agency (the ability to plan or have self-control).

The Stanford scholars called that study “pioneering work,” but said it does not address how people parse mental life itself. Instead, Weisman said that the Harvard study addressed the difference among beings, for example, between a beetle and a dog, but didn’t identify the categories or parts of the mind.

“If the question is, ‘What are the parts of the mind?’ then I think our studies indicate the answer is more like this body-heart-mind than the agency-experience framework. I think these two frameworks can work together to inform our social reasoning more broadly, and it would be fascinating to explore this in future research,” Weisman said.

Understanding AI, each other

The findings, the researchers say, may play a role in improving people’s relationships with technology and with fellow humans. For example, through the body-heart-mind framework, viewing a robot as having a “mind” – or even a “heart”—may allow people to humanize robots, therefore increasing the likelihood of a smooth interaction.

The framework could also shed light on how to reduce dehumanization between people, the researchers say. For example, objectification might take the form of emphasizing a person’s body over the mind and heart, while other forms of prejudice and stereotyping might take the form of focusing only on people’s “minds” and neglecting their emotional life, or focusing only on people’s “hearts” and underestimating their intellectual abilities. The body-mind-heart model may provide a useful perspective for understanding how and why people enhance or reduce mental capacities within those three major clusters.

“This is an exciting new framework, but it’s just the beginning,” Dweck said. “We hope it can serve as a takeoff point for theory and research on how ordinary people think about age-old questions about the mind.”

This article was originally published by Stanford News. Read the original.