Seventy-five percent of pet owners consider their animal part of the family. Eighty percent of computer users curse out loud at uncooperative machines. Seventy percent of people who own a Roomba—the much-hyped room-cleaning robot—end up giving it a name. 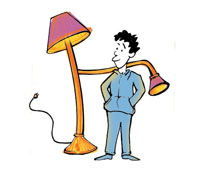 Most of us are apt to attach human characteristics to nonhuman objects and animals, a tendency known as anthropomorphism. Yet despite the prevalence of anthropomorphism in our lives, it carries a powerful stigma. It’s seen as irrational, if not insane—consider, for example, the stereotype of the crazy old lady who talks to no one but her cats. When we anthropomorphize, the thinking goes, we’re living in a world built on lies and misperceptions.

New research might make us think again. This science suggests that anthropomorphism reflects a deep drive to form social connections, even with objects made of metal and wire. Far from being irrational, anthropomorphism may be a perfectly rational response to the social isolation that seems to be reaching epidemic proportions in the United States: A 2006 survey by sociologists at Duke University and the University of Arizona revealed that since 1984, twice as many people say they have no one with whom to discuss important personal matters; in the same time span, the average person has one-third fewer close friends.

In short, it’s a good time to wonder how our brains cope with loneliness. 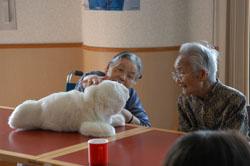 Spending time with the robotic seal Paro not only lifts people's moods but may actually make them more resistant to stress. © Institute of Advanced Industrial Science and Technology

Desperate to connect
Ensconced in his sunny office at the University of Chicago Business School, psychologist Nicholas Epley seems like a friendly guy, especially for someone who studies anthropomorphism and its relationship to loneliness.

In a 2006 experiment on anthropomorphism, participants answered questions about how often they felt isolated from others. They were then presented with a series of objects, such as an egg-shaped alarm clock that Epley now keeps on a shelf in his office.

To what extent, researchers asked participants, does each gadget have intentions, free will, or emotions? The loneliest people, they found, were the ones most likely to assign human qualities to inanimate objects. “It turns out,” says Epley, gesturing toward the clock on his shelf, “that you’re more likely to think that a gadget like that little guy up there has some kind of will and a mind of its own if you’re a chronically lonely person.”

That finding led Epley to challenge the notion that anthropomorphism is a mistake or symptom of insanity. His goal became to figure out why we can’t seem to prevent ourselves from doing what he calls “seeing human.” What, Epley asks, are “the cases in which these kinds of phenomena are likely to be the most powerful, and when are they likely to be the weakest?”

He followed up on that 2006 study with an experiment that induced loneliness in his lab—an attempt to draw a more direct causal link between loneliness and anthropomorphism. He asked one group of participants to empathize with a lonely protagonist in a video clip, instructing these participants to put themselves deeply into the shoes of the character they watched. Another group watched a video with a fearful protagonist. A third group watched a clip of a crowd of people interacting.

Then all the groups were asked to rate their pets, or other animals they knew, on scales measuring thoughtfulness, considerateness, and compassion—traits that a lonely person might appreciate in a supportive friend. Again, Epley found that people who experienced loneliness were much more likely to anthropomorphize, in this case by attributing human traits to animals. This, says Epley, further suggests that humans tend to create “agents that can especially alleviate the pain of social disconnection.”

The human brain, it seems, is hardwired to satisfy its drive for social connection in any way it can, and for good reason: A growing body of scientific evidence links loneliness to a long list of health problems, from Alzheimer’s to heart disease to diabetes.

For instance, research by neuroscientist Louise Hawkley, also at the University of Chicago, has found a connection between loneliness and high blood pressure among middle-aged adults, which increases their risk of death from a stroke or heart attack. But Hawkley has also found that the effects of loneliness may begin earlier in life. She says loneliness in young adults seems to affect the ways their bodies regulate blood pressure, placing greater “wear and tear” on blood vessels and setting the stage for high blood pressure later on.

These results, says Hawkley, support a troubling theory: “loneliness accelerates aging.” From this perspective, anthropomorphism is a critical—if, perhaps, last ditch—survival technique that kicks in to stave off the negative health effects of loneliness.

Curing the lonely brain
As someone familiar with the detrimental effects of social disconnection, Hawkley finds Epley’s research “fascinating”—and potentially therapeutic. “Given the importance of a feeling of social connectedness for health,” says Hawkley, “how that need is satisfied may be less important than the fact that it is satisfied.”

If anthropomorphism does prove to have genuine health benefits, they would arise out of a kind of placebo effect: The body is responding to the idea of social attachment, not to an actual connection with a real person. “This is the wonder of the human organism,” says Hawkley. “How we think and feel is intimately bound up with how our body behaves, thanks to reciprocal communication streams between the brain and the body.”

In other words, the connection between mind and body is extraordinarily powerful. Emotions can have measurable physical effects, for better or for worse—and those emotions can be generated any number of ways, including through interactions with both people and objects.

Hawkley believes one positive way to apply Epley’s findings would be to give a lonely person the responsibility of caring for a pet. Therapies like this, which exploit our propensity for creating anthropomorphic support systems, might offer “physiological protection” to people who don’t get enough social contact.

Many studies have investigated the perks of animal companionship. One 2001 study found that people taking drugs for high blood pressure who adopted a pet experienced greater benefits from drug therapy. The pet-owners also showed significant resistance to blood pressure spikes when exposed to sudden stressful events.

There is less hard evidence for the benefits of anthropomorphic machines. Still, Epley’s results suggest that people can respond emotionally to technology on some level.

Senior citizens throughout Japan would seem to agree. Since 2005, many of these seniors have received visits from a furry animatronic seal named Paro, who offers short periods of friendly companionship to patients at day centers and nursing homes across Japan. Research conducted by Japan’s National Institute of Advanced Industrial Science and Technology (AIST) found that interacting with Paro improved mental sharpness in patients with disorders like Alzheimer’s and dementia. And after their sessions with the lifelike Paro, half of the impaired subjects showed more normal brainwave measurements than before. The effects were greater in those who reported that they enjoyed spending time with the robot.

Paro’s inventor, Takanori Shibata, a senior research scientist at AIST, has also tested the urine of elderly subjects who interacted with Paro, looking for stress-related hormones. His findings suggest that spending time with Paro not only lifts people’s moods but may actually make them more resistant to stress.

Finding humanity
Still, not everyone is optimistic about using technology to satisfy the human need for social connection.

Roboticist Brian R. Duffy, who has spent years developing social robots at places like MIT’s Media Lab in Europe, cautions that objects are poor substitutes for interactions with other people. To Duffy, the emotional bonds that can develop between seniors and machines like Paro are dangerous because they substitute real human compassion with something manufactured.

Technology, says Duffy, “should only assist us in being human, not replace the humanity that is within us.” His counsel for us as a society? “Take more responsibility for those around us, including our aging parents and grandparents, rather than offload our roles onto machines.” Duffy’s advice is sensible, but it doesn’t seem to offer much solace to lonely individuals.

Stewart Guthrie, professor emeritus of anthropology at Fordham University, has written extensively on the psychology and philosophy of anthropomorphism. He argues that while the reasons for anthropomorphism are diverse, it is primarily a side effect of our need to look for meaning in the world. “What we look for first,” says Guthrie, “is whatever matters most. If we’re lonely, it’s potential social partners.” Guthrie believes that in showing how loneliness motivates anthropomorphism, Epley has confirmed an essential truth about what humans desire most—and what we’re missing in our world today.

In the end, says Epley, we can’t judge anthropomorphism as good or bad, for it seems to be an instinctive human reaction. “You can’t change how your brain works,” he says. “It’s a three-pound meatloaf we’ve gotten over several million years of evolution. We’re not going to change it by wishing it worked a little differently.”