As a progressive Democrat from New York City, I’ve long associated guns with gang violence and police shootings. In 2013, I was robbed at gunpoint. An acquaintance of mine is a survivor of the mass shooting at Stoneman Douglass High School in Parkland, Florida. Simply put, guns scare me. 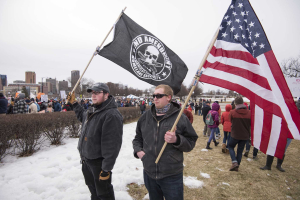 Gun rights counter-protesters at Minnesota March For Our Lives in 2018. © Fibonacci Blue / CC BY 2.0

But as a leader at Braver Angels, a national movement to bridge the partisan divide, I’m committed to talking with—rather than simply at or about—those whose views, experiences, and politics differ from mine. And in the wake of the recent mass shootings in Buffalo, New York, Uvalde, Texas, and, most recently, Highland Park, Illinois, I’ve been working to cross America’s gun divide to see if I can learn anything that might be helpful to other Americans mired in fear, anger, and despair.

I recently spent four days visiting a friend on his cattle ranch in Saguache, a remote county in Southern Colorado, and then hosting an emotional podcast conversation between a longtime gun safety activist and a deeply conservative proponent of gun rights.

My conversations in Saguache opened a new window into the lives of gun owners whose work necessitates their possession, and whose identities are inextricably tied to the role of self-reliance in harsh, often dangerous conditions. The folks I spoke to evinced both a commitment to gun rights and a commitment to owning, using, and storing guns safely and responsibly. That these commitments can coexist suggests a path toward bridging the values divide between liberals, who see them in unbreakable tension, and conservatives, who believe the Second Amendment is sacrosanct.

But those values—and the degree to which they can be clarified, shared, and transformed—can only be explored through the kinds of deep, honest, and good-faith conversations I began on the ranch. Otherwise, the stereotypes, partisan maneuvering, and extremism exemplified by polarizing politicians like Rep. Boebert will only further poison our perceptions, moving the two sides beyond incomprehension and suspicion, toward hate and dehumanization.

Many of the liberal activists I know back in New York City are not only horrified by the level of gun violence in the United States, which far surpasses rates in other countries with stricter gun laws; they believe that gun rights activists have blood on their hands. To them, more guns equals more death, and they see the crisis as a public health emergency whose solutions must include curbing access. The recent Supreme Court ruling, which struck down a New York law limiting residents’ ability to carry guns in public, was a reminder that Democrats’ power to unilaterally enact gun control measures in the states they control is no longer guaranteed.

On the flip side, many of the conservatives I know view the Second Amendment as a sacred right and an ultimate good. To them, more guns equals more freedom, and any efforts to limit their right to bear arms create a slippery slope toward tyranny. They fear the recent federal gun safety legislation, a surprising bipartisan breakthrough that will expand certain background checks and increase funding for “red flag” programs that allow courts to confiscate guns from individuals deemed dangerous, represents a step toward illegitimate social control.

How might we reconcile such conflicting priorities amid name-calling, finger-pointing, and the rising threat of political violence? It starts with conversation.

After I returned from Saguache, I knew I had to keep the conversation going, so I hosted a podcast between Mark Beckwith, a former Bishop whose gun safety activism intensified in the wake of the Newtown school shooting, and Wilk Wilkinson, a working-class conservative who owns dozens of guns and speaks passionately of his “God-given right” to protect himself and his family.

Their divide begins with their life experiences.

For Wilkinson, guns are a way of life. “Man, I was too young to even remember my first experience with a gun,” said Wilkinson. “From the day I was born, there was a gun in my household, if not multiple guns. I bet I was in diapers the first time I went hunting with my dad. The first time I shot a shotgun I was too small to even hold the gun up to my shoulder.”

And yet, safety was always paramount. Children could never touch a gun without adults present, the first thing they did when handling a gun was check that it was unloaded, and they always treated unloaded guns as if they were loaded. Never did they point a gun at anything they didn’t intend to hunt or destroy.

Beckwith has a very different relationship with guns. After the Newtown shooting, in which 20 children were murdered, Beckwith convened a group of bishops to organize around the push for gun safety legislation. Beckwith is committed to fighting the scourge of gun violence and spreading ideas that promote gun safety, but he maintains that his project requires more than advocacy and activism; it requires listening and understanding the perspectives of gun owners.

“Several years ago,” Beckwith recounted, “I went to a gun show in Massachusetts, and what I discovered there among the attendees is that they were speaking a language I didn’t understand, but it was a language that is profoundly American. There’s a sense that we on the gun violence prevention side want to take their part of the culture away. We can’t do that, so we have to be engaged in conversations to listen to one another.”

Within Beckwith and Wilkinson I sensed both fear and hope.

To a liberal, Wilkinson’s views might seem extreme, irrational, or even unmoored from reality. How would banning assault weapons and high-capacity magazines affect his ability to own a couple of hunting rifles and a handgun or two for self-protection? But in a way that misses the point. Wilkinson’s views run bone-deep on the right, they represent a deeply felt reaction to lived experience, and they must be recognized and understood to build trust and find the areas of common ground that do exist.

Acknowledging each other’s fears and pain is hardest when it feels like it legitimizes a perspective we find false and harmful. But “seeing” someone in this way is not a zero-sum game, and acknowledging an opponent’s fears does not invalidate our own. Over time, it enables us to find the true empathy needed to transcend the fears that blind us to one another’s humanity and prevent us from working together for the common good. 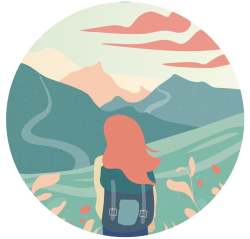 Beckwith and Wilkinson’s disagreements’ on gun policy are profound. Wilkinson is suspicious of the new “red flag” legislation because he doesn’t support the idea of the government evaluating people’s psychological fitness to exercise their rights; Beckwith feels the recent bipartisan legislation doesn’t go nearly far enough when it comes to closing loopholes and expanding background checks.

But the pair did find fertile ground in finding ways to increase education on how to handle guns safely and come together around initiatives to prevent gun suicides. By the end of the conversation, they were both hopeful to continue talking and further explore areas of common concern and potential solutions. And where they didn’t see eye to eye, Beckwith and Wilkinson could feel each other’s hearts. Together they grasped for the understanding needed to establish trust, vulnerability, and emotional connection.

Let’s face it: Attempting to bridge the gun divide can be frustrating and painful. Talking to someone whose views you find threatening is inherently fraught, and guns are an especially challenging topic because of their direct relevance to our safety and identity. These kinds of conversations are not for everyone.

But for those with the ability and desire to try, they can help us clarify disagreements, illuminate shared values, and ultimately remind us that our future as a democratic republic hinges on our ability to talk across the divide, even if—and perhaps especially when—it feels hopeless to try.