In the days and weeks following a mass shooting, television news programs saturate audiences with coverage of the tragedy, often focusing on the shooter. 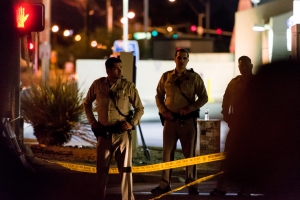 Police guard the location of the Route 91 Harvest Festival in Las Vegas where a mass shooting took place in October 2017.

But there’s a problem with this approach: It could be making mass shootings more common. According to a recent working paper, intense media coverage of these events may serve to glorify them in the minds of other potential mass shooters, who then seek the same attention by committing similar atrocities.

Jay Walker, an economics professor at Old Dominion University and a coauthor of the study, says that he and economist Michael Jetter wanted to look into the motivations behind mass shootings. “There’s been speculation about motives and there’s no clear resolution,” he notes.

Indeed, some of the most prominent mass shootings of the past decade have left the country puzzled. For instance, after almost a year of investigation, Las Vegas police could determine no motive for a mass shooting that killed 58 people, the deadliest such event in American history.

Experts have suggested that shooters are seeking fame as one possible motivation. By focusing so much coverage on mass shooting events, these experts warn, the news media may be creating incentives for mass shooters, especially when they focus intensely on the individual profiles of the shooters themselves.

But is that true? Walker and Jetter decided to test this hypothesis by analyzing the relationship between the level of news coverage and the occurrence of mass shootings. They picked the popular primetime news program ABC World News Tonight and tracked daily coverage from January 1, 2013 to June 23, 2016.

Shockingly, they found a positive and statistically significant relationship between the amount of coverage dedicated to mass shootings and the number of shootings that occurred in the following week.

“We find a pretty clear empirical relationship between coverage and future acts,” says Walker. But their work also hints at solutions. More than just reducing coverage, say experts, we all need to change the way we think about mass shootings.

How much is too much?

Although the relationship between TV news coverage and mass shootings has been studied before, the Walker-Jetter study introduced a novel innovation. To isolate causality between television news coverage and mass shootings, they also compared it to the occurrence of natural disasters. They found that news media coverage of shootings decreased during natural disasters, which was associated with fewer shootings the following week.

“You’ve got these natural disasters that crowd out coverage of the shootings when they occur,” Walker says. “And then in the future there are future shootings that happen in the near term.”

Walker and Jetter did not study the composition of news coverage of mass shootings, only the amount. Thus they could not offer any recommendations for how to change coverage, but Walker argues that it’s important to not oversaturate individual shootings with coverage.

This does not mean that it’s not worth the news media covering the topic of gun violence and probing possible solutions. But media can do that by discussing the wider issue rather than focusing on individual tragedies in a way that may unnecessarily increase public anxiety—and glamorize the shooters.

Jetter and Walker suggest that media can learn a lot from research into suicide contagion, the idea that exposure to a suicide can lead to an increase in suicidal behavior.

For instance, when the Netflix series 13 Reasons Why debuted—which depicted the aftermath of a teen’s suicide—mental health researchers critically examined the film, worried that it might create suicide contagion by glorifying the act of self-harm. One study did in fact find an association between watching the show and suicidal thoughts; another showed a spike in Google searches for suicide following the show’s release; yet another discovered that having seen the show led at-risk youth to think more about killing themselves.

Dr. Dan Reidenberg, a psychologist and the executive director of Suicide Awareness Voices of Education (SAVE), was one of the critics of 13 Reasons and is an advocate for changing the way the news media report on acts of violence like suicide and mass shootings.

“We want to make sure that the alleged perpetrator is not overly talked about,” he says.

“We want to emphasize the victims, we want to tell the stories of the community, and recovery, and resilience, rather than focusing on the perpetrator”

Nicole Smith Dahmen, a journalism professor at the University of Oregon who studies visual representation in media, agrees. “We know from research that the way mass shootings are covered can have a contagion effect the same way that suicides can have a contagion effect, so that’s very dangerous,” she says. “When it comes to covering mass shootings and gun violence, we want to emphasize the victims, we want to tell the stories of the community, and recovery, and resilience, rather than focusing on the perpetrator.”

Dahmen and Reidenberg’s conclusion is that intensely profiling mass shooters themselves could inspire more of them, because potential shooters will see violence as a way to quickly gain fame.

In 2017, SAVE put out comprehensive guidelines for reporting on mass shootings. These guidelines offer specific advice for minimizing “copycat” behavior by other potential shooters.

SAVE suggests, for instance, that media use the perpetrator’s photo “sparingly.” When they do publish the photo, news media should crop out imagery of weapons or uniforms, which are visual elements that may inspire copycats. Media should not sensationalize individual acts of violence in a way that may “encourage people who may seek notoriety.” SAVE advises television news anchors to not call a shooting the “deadliest incident since Columbine,” for example. In other words, media should not cover shootings like football, as a kind of competition.

Dahmen suggests that the news media can focus on solutions and on how communities are recovering rather than focusing solely on individual acts of violence.

“This is a chance for things like solutions reporting,” Dahmen said. “What are some potential solutions to gun violence, to mass shootings? Look at what communities are doing to recover and move on.”