Do you remember the last time you spoke in public?

If you felt afraid, you’re not alone. In a recent survey, more Americans said they were afraid of public speaking than being robbed—or even dying! But if you’ve tried to “imagine your audience in their underwear” to quell your fears, you may need a new technique—and self-compassion could be the one. 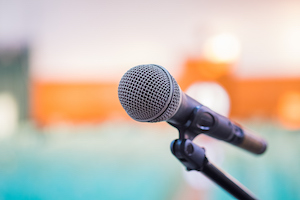 If you haven’t heard the term already, self-compassion refers to “treating yourself like a good friend,” especially when life feels hard. As Kristin Neff, leading researcher in the field, notes, we tend to treat ourselves harshly when things go wrong. If I’m speaking in public, for example, I might become highly critical of myself for being nervous or making a mistake.

In contrast, self-compassion involves being mindful of our emotions, without avoiding or exaggerating our pain; understanding that our difficult feelings unite us to our common humanity, rather than being a reason to feel distant from others; and treating ourselves kindly with the wish that our suffering be alleviated.

In numerous studies, self-compassion predicts lower stress, anxiety, and depression, and more happiness and life satisfaction. These outcomes are likely driven by how treating ourselves kindly makes us feel safe and connected, rather than threatened and isolated. On a physiological level, self-compassion has been found to activate our parasympathetic nervous system (evolved to help mammals feel soothed by and connected to one another) and deactivate our sympathetic nervous system (SNS), which prepares us to defend ourselves if we feel attacked.

Public speaking situations are prime opportunities for our SNS to take over. While our life isn’t literally being threatened, on stage, we may feel like our self-image and sense of belonging are at stake if we make a mistake. Psychologists refer to this situation as a “psychosocial threat.” In response, our heart rate may increase and our body may prepare to fight or flee.

Researchers can induce psychosocial threat responses with the Trier Social Stress Test (TSST). During the test, individuals prepare a speech, give the speech to a panel of expressionless judges, and then perform a math task, like counting backwards in increments of 17 from 2,043. Sounds pretty stressful, doesn’t it?

But two studies found self-compassion levels are associated with lower stress when people take the TSST. In one, Joanna Arch and colleagues trained participants to be more self-compassionate. Participants followed a five-minute loving-kindness meditation for five days, which involved repeating a series of wishes for the self and others to be happy.

In comparison to two control groups who didn’t engage in the same practice, the self-compassion group showed reduced physical signs of stress and self-reported feeling less anxious throughout the TSST. Physiologically, self-compassion participants displayed lower levels of salivary-alpha-amylase (sAA) and a more stable heart rate than the control groups, two signs that their SNS was less active and they felt less threatened.

“Treating ourselves kindly makes us feel safe and connected, rather than threatened and isolated”

In another study, Juliana Breines and colleagues examined how people’s general tendency to be self-compassionate was related to their reactions to psychosocial stress over time. Our bodies prepare to heal themselves from a threat by producing a substance called interleukin-6 (IL-6), which causes inflammation. While useful if we really are in danger, prolonged inflammatory responses can eventually cause health problems. To trigger that stress response, the researchers had people take the TSST two days in a row.

But public speaking may be more stressful for people who chronically fear social evaluation, like those with social anxiety. Can self-compassion help them?

Another experiment recruited participants who measured high in social anxiety. Rather than use the TSST, the researchers told participants they had three minutes to prepare a speech.

First, however, participants in the self-compassion group wrote about a negative situation at work. Then they wrote three paragraphs to themselves from the standpoint of each component of self-compassion (mindfulness, common humanity, and self-kindness). In the control group, participants wrote three paragraphs describing the negative event and their feelings in more detail.

What is clear is that imagining your audience in their underwear represents an outdated technique for relating to the world and managing our public speaking fears. Buffering our self-esteem by putting others down can maintain our feelings of isolation, even if it temporarily makes us feel better about ourselves.

In contrast, the strength of self-compassion lies in promoting an interconnected sense of self, so that difficult moments are viewed as part of a human experience. It reminds us that we are just as worthy of the kind words and acts we don’t think twice about bestowing on others.

So, the next time you feel nervous before or during a presentation, offer yourself compassion. Be mindful of your thoughts and sensations, recognize your common humanity by noting that public speaking anxiety is part of being human, and offer yourself a kind phrase (“May I be well”) or gesture (a hand on the heart).

Doing so will help you remember that you really are safe and connected and that being in front of an audience isn’t nearly as life-threatening as it might feel.