The premise is simple, and it seems like common sense: If Republicans and Democrats could come together for good-faith dialogue, the conversations would reduce tensions and ease the corrosive polarization that threatens U.S. democracy. 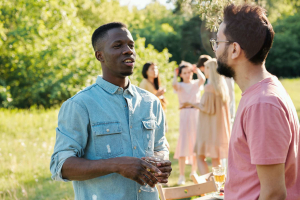 But a new study coauthored by UC Berkeley political scientist David Broockman found that brief, cross-partisan conversations about sensitive political topics have scant power to narrow divisions. Conversation about neutral topics can create some goodwill, the authors found, but even there, the effect doesn’t last.

“Basically, though, we didn’t find any of that,” he added. “Simply liking the other side’s voters more doesn’t appear to affect your political behavior.”

The new research was released in June in the journal Science Advances. It was coauthored by Broockman and Erik Santoro, a Ph.D. student in social psychology at Stanford University.

Broockman’s recent research has focused closely on the dynamics of political division and the role of communication in nurturing more constructive engagement.

His work has found that political advocates going door to door to promote a cause can have a significant, long-lasting persuasive impact by listening effectively and by talking about people’s life experiences. Earlier this year, he reported that conservative Fox News viewers who spent a month tuning to CNN instead experienced a broad shift in their political opinions—until they returned to watching Fox.

Another paper coauthored by Broockman, forthcoming in the American Journal of Political Science, finds that reducing the hostilities associated with political polarization might not, in fact, improve the health of democracy.

Intriguing insights on what works—and what doesn’t work

Alarmed by the increasingly vicious divide in the American electorate, a growing legion of organizations in the U.S. is working to bring right and left together for discussion and deliberation. For example, BridgeUSA, a six-year-old nonprofit with close ties to Berkeley, is working on university and high school campuses to encourage discussion that transcends partisan rancor to focus on defining challenges and solutions.

Broockman, in an interview, stressed that his latest research doesn’t contradict those efforts. Rather, he said, it’s essential to study what kind of engagement works to ease polarization—and how to make positive results deeper and more long-lasting.

The research detailed in Science Advances covers two experiments. In one, the authors paired up hundreds of Republicans and Democrats for brief, one-on-one discussions about a topic that usually isn’t controversial: What makes a perfect day?

Those conversations produced large reductions in polarization, Broockman and Santoro found. But within three months, the reductions had all but disappeared.

In the second experiment, the researchers repeated the first experiment, but also brought Republicans and Democrats together for one-on-one discussions that focused on potentially tense political topics. They were split into two groups—in one, pairs of Democrats and Republicans were assigned to talk about why they identify with their own parties, and in the other, they were assigned to discuss why they dislike each other’s party.

These conversations had virtually no effect on reducing polarization.

Still, the study produced some intriguing insights about how we can all get along. Among those assigned to talk about what they liked about their own parties, the research subjects felt their discussion partners weren’t really listening to them. Those conversations typically lasted about 13 1/2 minutes.

But those assigned to discuss what they disliked about the opposing political party seemed to have an easier time. Their conversations lasted much longer—nearly 18 minutes, typically.

While the chats didn’t change political opinions, those individuals were more likely afterward to say that cross-partisan conversations were important. The study even found signals of hope that suggested very slight reductions in polarization and increases in warmth toward people in the opposing party.

“People tend to think their own party is OK, but they don’t love their own party,” Broockman explained. “Their feelings are lukewarm. And so when someone else says, ‘Here’s what I don’t like about your party,’ most people will agree and say, ‘Yeah, my party isn’t perfect.’”

As it turns out, real life is more civil than Facebook

That points to another insight from the study. With participants’ consent, all of the conversations were recorded, and Broockman said he was struck by the consistently civil tone he saw in the transcripts.

“None of the conversations that I looked at devolved into the kind of arguments that you would see on Facebook,” he said. “Our research participants didn’t leave hating each other more. In some ways, this is maybe better than people would have expected.

“When we think about the other side, we tend to think about the people who show up on social media saying the most extreme things in the most uncivil way. But that really is not how the average person interacts when they’re actually talking face-to-face.”

Such insights—modest, but encouraging—suggest that further research could shed light on a recipe for political discussions that might reduce polarization and produce other democracy-enhancing effects.

For example, Broockman said it might be interesting to see what would happen if the person-to-person engagements were more extensive, longer-term discussions and not just one-offs. If researchers could find a way to reduce polarization through one-on-one engagements, he said, they could then study the interventions that could help to sustain and build on that trust.

But ultimately, Broockman advised, we probably should let common sense temper our optimism. Democracy is difficult; conflict and polarization are features, not bugs, of the system.