This article is the eighth in a series exploring the effects that unconscious racial biases have on the criminal justice system in the United States.

“In too many communities around the country, a gulf of mistrust exists between local residents and law enforcement,” said President Obama in a recent speech at the Congressional Black Caucus Awards Dinner. “And that has a corrosive effect—not just on the black community; it has a corrosive effect on America.” 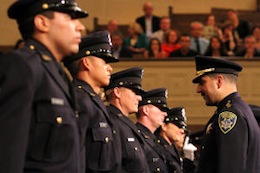 Assistant Chief of Police Paul Figueroa, center, congratulates graduates after they are presented with their badges during the graduation ceremony for the 167th Police Academy at the Scottish Rite Temple in Oakland, California © Laura A. Oda/Contra Costa Times

These are powerful words from the President of the United States. In discussions around the country with other law enforcement and community members, I know the issue of police and race has reached a level of intensity that must be actively addressed. These conversations have taken place for many years, yet we don’t seem to be making much progress on the core problem—chronic and pervasive distrust between communities of color and police.

The continued deficit in trust is a bitter pill to swallow, because I believe the vast majority of law enforcement began and remain committed to service of others. I have seen first-hand the sacrifice of police personnel and their willingness to accept high levels of risk in the performance of their duties. I have had the honor to know officers who have served the community in trustworthy ways and even paid the ultimate price to protect others.

We have all dropped the ball, from the level of the office of the President to the halls of academia to the streets that police try to keep safe. This isn’t to say there is never probable cause for arrests or that many of the people arrested don’t need to be brought to justice. But enforcement strategies and tactics have often been a breeding ground for conflict, even where there is legal justification for law enforcement to take action. In addition, the staggering incarceration rates and the costs of incarceration have had measurable and devastating effects for many communities, particularly communities of color.

Those are not outcomes that most officers want. But the research highlighted in Greater Good’s implicit bias series has raised serious concerns about the effects implicit bias can have on policing decisions. The work shows how our unconscious biases can undermine our consciously held beliefs. This is true for all people, and even for people making decisions affecting their same racial group. Implicit bias isn’t the only factor driving disparities of enforcement and unacceptable incarceration rates, but it certainly has an impact. The only way to determine and address the impacts of implicit bias—and address them—is to do the following: have direct, open, and honest conversations with the community, rigorously collect and study the data, and implement enforcement strategies and training programs focused on fairness and equity, particularly for communities of color.

Can policy help to challenge bias? To begin the trust-building conversation, law enforcement, elected officials, and all community stakeholders must start by recognizing that racial disparities have had terrible consequences for our society—and that we are ready to do something about it.

This is, in fact, the starting point for racial reconciliation efforts underway by the National Network for Safe Communities and other trust-building conversations around the country. I strongly believe this position is a key element for building lasting trust with communities of color, who are looking for tangible signs that police agencies are doing what they say they will do. These conversations also allow law enforcement to talk about the realities they face in deciding where and when to conduct enforcement efforts to reduce crime.

Getting the facts raises awareness

Data collection can play a critical role in helping law enforcement to recognize that there is a problem—and in shaping the response. Professor Jack Glaser, in his 2014 book Suspect Race, outlines the latest scholarly research and provides compelling evidence for the presence of racial bias in many policing practices—and he argues how racial profiling exacerbates incarceration rates among affected populations. Stanford professor Jennifer Eberhardt’s groundbreaking work continues to illustrate how race can impact decision-making—which can lead to negative outcomes for African Americans.

Though there is debate about how and why evidence should be collected and analyzed, efforts should be made by all police agencies. Collecting and sharing data is, at a minimum, a significant step toward transparency; unfortunately, efforts over the years to collect and analyze data have generally been localized because of inconsistent collection methods across agencies. Fortunately, there is a nationwide effort underway by the Center for Policing Equity. These efforts will involve data collection from agencies around the country and normalize how the data is compared across categories. This is a particularly encouraging innovation for law enforcement research.

On the cutting edge of the research, there are efforts underway by Professor Eberhardt to look at the extensive amounts of body camera footage collected by a police agency. The goal is to analyze the quality of the interactions in order to identify themes during police stops and engagement with the community. It may identify if and how bias plays a role in the encounter, and allow agencies to design interventions to address the problem.

But it can also provide feedback regarding positive and negative interactions. This approach can go a long way toward informing training and policy with a constant eye on improving interactions with the police. The goal is always to move toward increased positive interactions, even during difficult circumstances, as a way of building trust with the police. This is one of the first systematic and large-scale efforts to use footage captured by body-worn cameras for this purpose.

Of course, facts will not be helpful without a culture of fairness and inclusion in police agencies. The Chicago Police Department has pioneered and implemented training that emphasizes four key elements of procedural justice, all of which can help build trust in the police and may have positive impacts at addressing effects of implicit bias:

There are three agencies in California also providing this training. If we take the research on procedural justice seriously, it gives us a clear framework to shift our policies and procedures toward building legitimacy. The legitimacy can be earned, day-by-day, by changing the nature of the interactions between police and communities of color so that instead of reinforcing distrust and tension, they begin to build trust and cooperation. This training is now being adapted for application in at least two states. 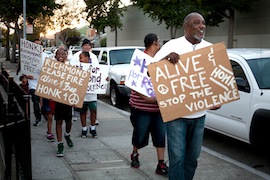 Given the importance of trust to public safety—and the ongoing coverage of negative, often tragic encounters between police and community members—I strongly believe law enforcement leaders must openly advocate and implement strategic polices and enforcement strategies to focus on increasing trust and lowering crime at the same time. This will go a long way toward signaling their commitment to a new way and a new type of relationship with the communities they serve.

One excellent example is the Cease Fire strategy, which recognizes that a very small number of people are responsible for shootings and homicide—and they themselves are often the targets of violence. These people can be identified and communicated with in a direct and respectful way. The communications to them explain the risks of continued participation in violence and offer services available to them. It is made clear that the community and law enforcement want something different for them: for them to be alive and free. But this is not a Pollyannaish approach, for it also makes clear that violence cannot be tolerated. Those who continue to make their communities unsafe will face enforcement action and prosecution.

This approach has proven far more effective in reducing violence and building community trust than stopping large segments of a population, a strategy sometimes equated with racial profiling, which only exacerbates tensions between police and the community. There are additional promising strategies related to restorative justice and re-entry programs which lower recidivism rates.

The evidence of low trust of the police in communities of color is disheartening. Law enforcement leaders are in the unique position to implement programs to address the low levels of trust.

There is no magic wand—and building trust is hard work. It begins with an honest conversation about the effects of policing in the past. Law enforcement leaders must recognize that key members of the community may not even sit at the trust-building table until they observe law enforcement leaders making concrete efforts to address the issues. The President’s Task Force Report on 21st Century Policing is a great place to start when considering the best steps forward to building trust in your community. It’s hard work, but the problem is not intractable.  I am grateful to the Greater Good’s implicit bias series for offering thoughtful discussion and research on this critically important topic for society today.