It’s back-to-school season, which means it’s time to stock up on notebooks, pens, and . . . beer?

According to a 2012 study, a whopping 37 percent of college students are binge drinkers. That number is lower than it was in 1980 (44 percent), but the traditional prevention programs still aren’t working as well as intended. Meanwhile, binge-drinking students are receiving lower grades, compromising their health, and getting into legal trouble. What to do? 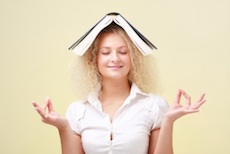 Researchers from Ohio University recently examined whether a brief training in mindfulness might help. The results suggest that such programs—which have previously shown benefits for substance abusers—might actually reduce binge drinking among college students. Although by no means conclusive, their pilot study should provide some hope to concerned parents and administrators alike.

Researchers recruited 76 college students who had had a binge drinking episode in the previous two weeks, defined as five or more drinks in two hours for men or four for women. Half of them participated in a mindfulness program: In an initial training, they listened to guided meditations designed to heighten their awareness of their thoughts, feelings, and sensations in the present moment. They also learned mindfulness techniques such as “nonjudgmental acceptance”—which means observing those thoughts and feelings without seeing them as good or bad—then applied those techniques when viewing tempting images of alcohol. Over the next four weeks, they did another guided meditation and were asked to meditate for an hour per week on their own.

The rest of the students weren’t taught any techniques and didn’t do any meditation. In the face of the tempting images, they were told to use whatever techniques they usually rely on to control the urge to drink.

After four weeks, the mindfulness group was already seeing benefits. On average, they had binged 2.6 fewer times than the other group. They weren’t experiencing as many negative consequences of drinking, such as getting into fights, passing out, not being able to do homework, or suffering from withdrawal. And they felt more control over their alcohol choices, meaning they were better able to refuse another frosty beer or throat-burning shot in a variety of situations.

Interestingly, the mindfulness group barely reduced their total number of weekly drinks. They also didn’t say they were ready to change their addictive drinking habits. Altogether, these findings suggest that college alcohol programs preaching abstinence might not be the best way to reduce binge drinking, but that, with the right kind of training, students can develop a healthier relationship to alcohol.

Why might mindfulness reduce bingeing? College students don’t really make a conscious decision to binge, the researchers point out. It seems to happen automatically in an atmosphere filled with beer pong, kegs, and cajoling fraternity brothers. Mindfulness disrupts this process and allows them to pause, be aware of their craving, and decide not to indulge it.

So it would make sense for mindfulness to help with other types of bingeing—and another recent pilot study suggests this may be the case. That study explored whether binge eating might be reduced by practicing “self-compassion,” which is when we extend the same kind of care, concern, and understanding toward ourselves that we would toward a friend. Mindfulness is a key component of self-compassion, in that people need to be aware that they’re suffering before they can extend compassion toward themselves.

In the study, some participants with binge-eating disorder wrote self-compassionate letters to themselves, visualized compassionate images, and practiced being self-compassionate when tempted to binge. Another group of participants tried to avoid bingeing by picking active, time-consuming activities to do instead—what the researchers call a more traditional “behavioral” approach to binge eating. In both groups, participants also planned the next day’s meals and when to eat them. A third group did neither program while on a waitlist for the self-compassion training.

After three weeks, the self-compassion group went from bingeing nearly four days per week to fewer than two—they binged less than the behavioral group and less than half as much as the waitlist group. In addition, they were less worried about their weight and eating—so much less that they didn’t technically qualify as having an eating disorder anymore.

Both of these studies are pilots, meaning that they tested experiments with small groups to see whether further research might be warranted. They represent the first study of a mindfulness program on binge-drinking college students and the first randomized controlled trial of self-compassion training among people with an eating disorder. (Randomized controlled trials, science’s gold standard, randomly assign some study participants to one type of treatment while others receive a different type or no treatment, while tightly controlling other factors in the study; if the researchers see a change before and afterwards, they have good reason to conclude that the treatment actually caused that change.)

The participants in these two studies were not particularly diverse—three-quarters or more were white—but the results are promising. In the future, similar studies might last longer and follow up with participants months later to see if the benefits stick.

But given how many other benefits have been associated with mindfulness, taking action now couldn’t hurt. Why not add a meditation app to your back-to-school shopping list?