Andrew Weil is best known as a pioneer in the field of integrative medicine—a healing-oriented approach to health care that integrates the body, mind, and spirit. As the founder and director of the Arizona Center for Integrative Medicine at the University of Arizona, he has promoted health lifestyles for decades and written several popular books on how to maintain optimal health, including Spontaneous Healing.

In his latest book, Spontaneous Happiness, he turns his attention to improving mental health, in particular depression. Although the title may seem glib or naive, Weil is anything but superficial in his analysis of what’s wrong with the depression treatment industry today and what we should be doing differently to combat emotional disorders. 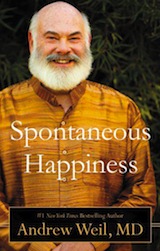 Although drugs like Prozac and Zoloft may help people cope with mental illness in certain circumstances, Weil believes that reliance on them—and the biochemical model of understanding depression they are based on—limits the ability for health care professionals to heal their patients. The rise in depression in this country and the dismal record of these drugs in curing people is evidence to that effect, he claims.

“Our health or lack of it is the result of biochemical interactions and genetics, dietary choices, exercise patterns, sleep habits, hopes, fears, families, friends, jobs, hobbies, cultures, ecosystems, and more,” he writes. Although disturbances in the chemistry of the brain may reflect problems of mood, he writes, these disturbances don’t necessarily require drugs and can be impacted by “improving attention, changing destructive patterns of thinking, and finding contentment within” through meditation, yoga, and other means.

Though the book is somewhat focused on depression, Weil has bigger fish to fry. As the title suggests, the book is also about happiness, which he redefines as a combination of contentment, comfort, serenity, balance, and resiliency. Unlike many self-help books, this book doesn’t try to sugarcoat life or suggest one think positively in the face of catastrophic circumstances. Instead, Weil decries this kind of thinking and instead suggests that cultivating equanimity can be a way of moving through difficulties without denying them or being overwhelmed by them.

“I advise you to beware of the countless books, websites, television shows, seminars, religions, and drugs (especially drugs) promising ceaseless bliss,” he writes. “The notion that a human being should be constantly happy is a uniquely modern, uniquely American, uniquely destructive idea.”

Weil offers a range of techniques that nurture the body, mind, and spirit in some way and help individuals to overcome adversity and become happier people. Many of his suggestions—such as engaging in regular exercise, promoting better sleep, practicing breathing meditation, or expressing gratitude—are based on solid physical and mental health research, and have been suggested elsewhere. But some of his techniques—such as taking supplements like fish oil and vitamins B complex or studying art and beauty—are less well supported by research, and putting them in the mix makes the book difficult to use effectively.

Still, Weil has his followers, and for them there is an eight-week program for wellbeing outlined in the last section of the book that incorporates all of his suggested practices. For those who would like to be more selective, there is a long notes section in the back that can help you sort through which advice is based on solid research and which isn’t. One wishes that Weil could have made this distinction clearer himself; but at least he makes the case—and a good one, I think—that we can and should use our own resources to build up our reserves of happiness and fight off depression. Prevention, as always, is the best medicine.