“It’s a human tendency to want to have pleasure and want to avoid pain or discomfort,” says Sarah Bowen.

But the University of Washington researcher adds that we’re often unaware of this tendency. We might reach for our cell phone to escape boredom or for food to escape stress, without knowing that these are coping strategies.

According to Bowen, substance abuse is another example of that too-human automatic drive to move toward pleasure and away from pain—one that affects an estimated 24 million Americans, according to the National Survey on Drug Use and Health.

Traditional treatment for substance abuse often focuses on avoiding or controlling triggers that result in negative emotion or craving. While research has shown that this approach can help, substance abuse relapse remains a problem: about half of those who seek treatment are using again within a year.

Bowen has spent much of her career studying another approach: mindfulness, which involves cultivating moment-to-moment, nonjudgmental awareness of thoughts, feelings, and surroundings. She and her colleagues have developed a program called Mindfulness-Based Relapse Prevention (MBRP), which combines practices like sitting meditation with standard relapse prevention skills, such as identifying events that trigger relapse. Rather than fighting or avoiding the difficult states of mind that arise when withdrawing from a substance, this combination tries to help participants to name and tolerate craving and negative emotion.

Tools for telling a new story

Bowen tells the story of a woman she calls Sophia, a MBRP participant who had a chronic issue with alcohol.

When Sophia got an invitation to help her co-workers set up for a party at work, she knew there would be alcohol everywhere—which, in Sophia’s mind, could only mean one thing: she’d start drinking and she wouldn’t stop. She’d drink during the party’s setup, and then she’d drink all night long, and then she wouldn’t go to work the next day, or attend her MBRP meeting the next week. But thanks to MBRP, when Sophia’s mind started telling this story, she recognized that that’s what it was: a story.

When Sophia recognized her thought patterns for what they were, she decided to try an exercise from her MBRP group (even though she thought it wouldn’t work).

She stopped to observe her present experience. In this pause, Sophia realized that she had a choice: She didn’t have to believe her mind’s story about what was going to happen; she had the choice to not drink. 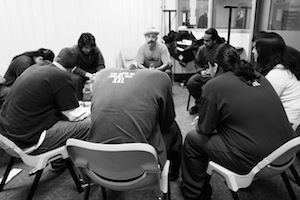 From then on, when cravings or urges arose, Sophia could recognize them—and be aware of her freedom to act differently, and observe thoughts and feelings until they passed.

This, says Bowen, is the key to the success of the program: MBRP helps people to relate differently to their thoughts, and use tools to disengage from automatic, addictive behaviors.

The success of MBRP is not just anecdotal. Bowen and her colleagues recently published a study in JAMA Psychiatry investigating how effective the Mindfulness-Based Relapse Prevention program is in comparison to a standard relapse-prevention program as well as a conventional 12-step program.

Bowen says that when people cultivate mindfulness, they’re developing a tool to become aware of that inclination to want only pleasurable things and escape uncomfortable things.

Mindfulness also helps people learn to relate to discomfort differently. When an uncomfortable feeling like a craving or anxiety arises, people like Sophia are able to recognize their discomfort, and observe it with presence and compassion, instead of automatically reaching for a drug to make it go away.

Bowen says that awareness of our experience and the ability to relate to our experience with compassion gives us more freedom to choose how we respond to discomfort, rather than defaulting to automatic behaviors.

Mindful for the long run

More research is needed to determine why MBRP might be more successful than other programs in reducing substance abuse relapse, but Bowen speculates that MBRP holds an advantage because mindfulness is a tool that can be applied to all aspects of one’s life.

But because mindfulness is a tool that can be used in every part of a person’s life, practicing moment-to-moment awareness could continue to be an effective coping tool. 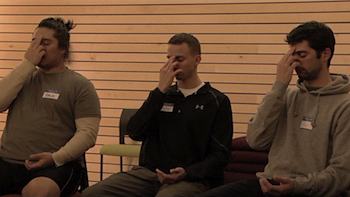 Bowen and her colleagues are not the only researchers who are studying mindfulness as a tool to cope with addiction. James Davis and his colleagues at Duke University are investigating mindfulness training as a way to help people quit smoking.

Similar to Bowen, Davis speculates that mindfulness is likely an effective tool in helping people with addiction because it’s a single, simple skill that a person can practice multiple times throughout their day, every day, regardless of the life challenges that arise. With so much opportunity for practice—rather than, say, only practicing when someone offers them a cigarette—people can learn that skill deeply.

Their intervention targeted low-income smokers, because, says Davis, the the lower your socioeconomic status, the more likely you are to smoke. The results, recently published in Substance Use and Misuse showed a significant difference in smoking cessation for people who completed the intervention, as compared to people who were given nicotine patches and counseling from the Tobacco Quit Line.

“Some people might have a bias to say that mindfulness is kind of a ‘new age-y’ thing, or something that falls primarily in the upper-middle class, intellectual population in the US,” Davis says. “The reality is, mindfulness as a practice itself is very simple. You don’t need to be an intellectual to do it, and you don’t need much of an education.”

Both Bowen and Davis emphasize that mindfulness is not a panacea; it doesn’t always work for everyone.

How can we tell if mindfulness will be an effective tool for a given person?

Researcher Zev Schuman-Olivier and his colleagues at the Massachusetts General Hospital Center for Addiction Medicine recently published a paper in Substance Use and Misuse suggesting that the type of therapy a person responds to may have something to do with their disposition—specifically, people who had the tendency to treat thoughts and behaviors with non-judgment and acceptance before the intervention began were more likely to be successful in reducing smoking following the mindfulness training. They write that if a person already has the skill to treat the self with non-judgment and acceptance, learning mindfulness practices likely comes easier to them than someone who has not previously practiced this skill.

Ultimately, the type of therapy that works best for a given person will likely capitalize on their pre-disposed strengths.

Of course, as Bowen and Davis both note, the skills of mindfulness can be taught to everyone. But Schuman-Olivier’s finding suggests that people who are not pre-disposed for mindfulness may need a more vigorous or lengthy intervention, in order to more thoroughly learn mindfulness skills. Or perhaps, people with less disposition toward mindfulness would fare better with a different therapy.

Another predictor of success in mindfulness-based treatment could be a person’s motivation to engage in the therapy.

In Davis’ study, the people that started the intervention with the highest level of nicotine addiction were the most successful in reducing smoking by the end of the treatment. Davis said that this seemingly counterintuitive result likely reflects their motivation to quit; the people that were the most addicted had, at that point, tried everything, and were willing to try their hardest to make this therapy work. Meanwhile, people that were less addicted saw their addiction as less of a problem. They reasoned, “If this doesn’t work, I’ll be ok—something else will work, eventually.” As a result, they were likely less motivated to quit, and less engaged in the therapy.

So where do the researchers go from here?

Bowen says she’d like to investigate how well MBRP does in different kinds of settings, as well as zero in on the mechanisms of mindfulness practices—for instance, what’s going on psychologically, and what’s going on in terms of neurochemistry when someone relates mindfully to a craving. Davis says that he also has plans to expand on his research, and that many are already applying mindfulness training for smoking cessation in new settings. Duke University wants to provide the training to cancer patients, and one company is even developing a mindfulness app to help people quit smoking.

Bowen says that it’s tempting to conclude that mindfulness is the “best new thing” for addiction treatment, but that in reality, further study is needed. “It absolutely has promise, we have a lot more to learn,” she says. “This is the beginning.”