Failure is never easy. From an early age, many of us are conditioned to strive for perfection in all facets of our lives, ranging from athletic performance to physical beauty to job salary. Perhaps nowhere is this more true than in education, where the pressures of getting good grades—and getting into a good college—can start to weigh on children from kindergarten. In this stressful environment, even one bad grade can trigger a cascade of self-doubt and setbacks. 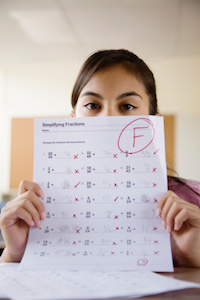 But a new study suggests that students will be better equipped to bounce back from academic challenges if they possess the skill of mindfulness—the non-judgmental, moment-to-moment awareness of our thoughts, feelings, and sensations. According to the study, instead of allowing failures to define them, more mindful individuals are able to shrug off minor setbacks and remain confident in themselves.

“People are confronted with adversity all the time,” says Adam Hanley, a doctoral student in the counseling/school psychology program at Florida State University and lead author of the study. “We were interested in whether mindfulness helps students to be more resilient and find meaning in their trials and tribulations, specifically with respect to education.”

In the study, 243 college students reported on their natural levels of mindfulness, which was measured by their tendency to observe and describe internal experiences (like feelings and sensations), act with awareness and non-impulsivity, and avoid critical judgment of their experiences.

The students then took a 15-question multiple-choice test that addressed general knowledge, such as “How many rings are there on the Olympic flag?” or “The Statue of Liberty holds her torch in which hand?”

Regardless of their performance, all students were told they answered only eight questions correctly, earning a grade of 53 percent. Following the news of their academic inadequacy, they were asked how much they felt a sense of academic self-efficacy, defined as “the belief that you have the capacity to meet challenges,” says Hanley.

The results, published in the journal Personality and Individual Differences, show that more mindful individuals reported greater belief in their academic abilities after a failure.

But how exactly does mindfulness promote this resilient response to negative events? The researchers also measured the participants’ propensity to re-evaluate stressful life events as harmless, positive, or beneficial, which is referred to as positive reappraisal. As it turns out, mindful individuals were also more likely to engage in positive reappraisal, finding meaning and benefit in the adversities of daily life. Importantly, Hanley’s analysis revealed that this resilient tendency was significantly responsible for the relationship between higher mindfulness and greater academic confidence after a failure.

In other words, “more mindful people were more likely to find benefit in adversity, which resulted in them believing themselves to be more efficacious after failing,” says Hanley.

Another way mindfulness may help us cope with our shortcomings is suggested by a 2015 European study, which investigates how mindfulness meditation affects our reactions to self-criticism.

In this experiment, 22 seasoned meditators (who had received meditation training and had been practicing regularly for at least a year) and 22 non-meditators each selected a series of self-critical and self-praising adjectives that they thought described themselves—e.g., unattractive or attractive, dishonest or honest, stupid or intelligent.

The participants were then placed in an fMRI scanner and presented with the negative and positive words they had selected, each preceded by “I am too…” (for self-critical words) or “I am very…” (for self-praising words). While each word was presented, they were instructed to focus on their emotional reactions while their neural activity was recorded. Following each set of adjectives, the subjects then reported their current mood.

The results demonstrated that the meditators generally had enhanced activation of the brain areas involved in emotional processing (such as the amygdala) when viewing both the self-praising and self-critical traits, suggesting that they fully experienced those negative emotions. Yet, according to their mood ratings just a few moments later, they were significantly less affected (emotionally) by both positive and negative experiences compared to non-meditators.

According to the researchers, this might be the product of an increased emotional balance that is believed to ensue from meditation training. In other words, meditators were able to reflect on their positive and negative traits in a more detached, non-reactive fashion; they might be more accepting and less regulating of their emotional reactions. This could result in the unusual observation of increased neural activation yet weaker emotional responses.

“Where others might ruminate longer, meditators really show this non-reaction style that allows them to be less attached and less clingy to these self-related emotional processes,” says Jacqueline Lutz, a postdoctoral fellow at the Center for Mindfulness and Compassion at Harvard University and lead author of the 2015 European study. “If you are less attached, you are more likely to quickly return back to a neutral emotional state.”

Thus, while the mindful students in Hanley’s experiment likely experienced a strong initial degree of negative emotion after their academic failure, their mindful dispositions may have facilitated a more thoughtful, less attached, and more emotionally balanced response that prevented them from becoming overly discouraged.

Hanley asserts that each and every one of us has the power to change our everyday levels of mindfulness: “Evidence suggests that sustained regular mindfulness practices will increase dispositional mindfulness,” he says. “So the introduction of mindfulness training in education will likely confer emotional regulation capacities as well as academic resiliency.”

Moving forward, Hanley hopes to use these findings to advocate for the introduction of mindfulness in more educational settings and investigate the applications of mindfulness and positive reappraisal practices in helping people cope with traumatic life events.

“There are a lot of kids who struggle in school,” he says. “If we can find ways to bolster their self-efficacy and allow them to bounce back from the inevitable setbacks that they will experience in an academic setting, then hopefully we can keep kids in school longer, and keep them more positive and engaged in the education process.”