My husband Don is generally a pretty cheerful guy. He has a great network of friends, takes good care of himself, and does work that is meaningful to him. 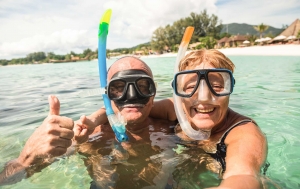 Certainly, Don’s happy disposition is a boon for me, as his happiness makes our relationship run more smoothly. But could it have any impact on my health—perhaps even extending my life? A new study by Olga Stavrova of Tilburg University in the Netherlands looked at that very question.

Stavrova analyzed data on over 4,300 couples from the Health and Retirement Study at the University of Michigan, an ongoing project studying adults ages 50 and older. She specifically wanted to understand the relationship between a spouse’s life satisfaction at one point in time and their partner’s survival over the eight years that followed from that point. This was a little tricky to figure out, as there are so many factors to consider when looking at longevity—for example, age, ethnicity, or race; socioeconomic status (SES); the baseline health (of both partners); and more. Stavrova statistically controlled for these other factors to see if a partner’s happiness affected one’s longevity above and beyond them.

Her findings were pretty remarkable: When a person’s partner was significantly happier—in science-speak, one standard deviation higher than average in life satisfaction—that person had a 13 percent lower chance of dying within the eight-year period. This was true regardless of the person’s age, ethnicity, SES, or health when their partner’s happiness was measured.

Though I was surprised by this finding, Stavrova wasn’t.

“Previous research has already shown that well-being in one spouse is associated with positive health outcomes in the other one,” she says. “So, this study extends these findings to mortality.”

As expected, a person’s own happiness was also tied to their mortality—for every one standard deviation higher, the person had an 18 percent lower chance of dying. But, when Stavrova considered how healthy either member of the couple was at the beginning of the study, and whether or not a person’s partner died during the eight-year window, being happy didn’t affect a person’s longevity while having a happy partner still did.

This suggests that a spouse’s happiness could be even more relevant than one’s own—it may be what keeps us alive longer. “In other words, the association between one’s life satisfaction and one’s mortality might be ‘explained away’ by a confounding with having poor health initially (at least, in this dataset), while the association between one’s partner life satisfaction and one’s mortality cannot,” says Stavrova.

How could this possibly be? Stavrova considered one explanation. Some research suggests that feeling supported socially is an important factor in staying healthier longer, and she thought happier partners might offer more support to their significant other. But the data she had didn’t support that hypothesis.

However, Stavrova did find evidence for another explanation: A happier partner tended to exercise more, which was tied to a person’s own willingness to exercise more. And since more exercise is tied to greater longevity, it’s possible that this social influence around exercising is what’s making the difference.

Still, it’s impossible to know that for sure, says Stavrova, since exercise patterns in both partners were measured simultaneously. It could be the opposite—that when you exercise more, your partner is happier. Plus, there could be other reasons for the findings: Maybe a happy person eats healthier food or makes more time for social activities, which could indirectly affect their partner’s longevity, as these activities tend to be shared within couples.

So, can we say anything for sure? Yes, says Stavrova: Our partner’s life satisfaction affects our own longevity, even if we aren’t well to begin with.

Does this imply that we should leave an unhappy spouse for fear of putting ourselves into an early grave? Though Stavrova fears people might interpret her findings that way, she insists it’s the wrong approach. Instead, she says, it may only mean that doctors and others should widen their view when considering patient health and consider the role partner happiness may play in healing. “A more humane implication is that healthy lifestyle recommendations should target couples (or households) rather than individuals,” she says.

In other words, if we want to be happier and live longer, we might want to focus on not just our own well-being, but that of our partner, too. Encouraging them to have healthy social relationships, exercise regularly, and engage in meaningful activities could lead to greater longevity for them and for you.

Luckily for me, Don is already there.