Last week, Greater Good excited controversy among readers when it covered a new study I conducted with Robert Levenson and Claudia Haase. Our research, published in the journal Emotion, found that the happiest marriages were the ones in which wives were able to calm quickly during conflict.

This struck a chord with many commenters on Greater Good’s Facebook page, some of whom read the research as promoting an anti-feminist message, as with these three separate examples:

Yep. The faster a woman can stuff her distress, the less the man has to deal with all those messy feelings of hers and his.

For generations, our culture socialized women to stay quiet and not rock the boat. Silence is NOT golden in relationships where only one person is permitted to have negative emotions. It’s abusive.

Great, now even science lets men off the hook in terms of sharing the emotional responsibility and commitment of a relationship, requiring working through tricky stuff like anger, disappointment, frustration. And why should women make this sacrifice? Why, for the greater good of course (= men´s greater good). It´s stuff like this that really undermines people´s trust in science, and on good grounds.

Greater Good invited me to address the question of whether these inferences accurately characterize our results. While I can understand the roots of the frustration voiced by readers, I’d like to elaborate on our findings by sharing three important considerations that might shape the response to our study. 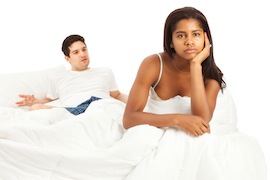 First, it’s important to note that this finding is part of a much larger study. Starting in 1989, Dr. Levenson’s research team began following middle-aged and older, heterosexual, long-term married couples. Researchers observed them in the lab engaging in conflict while simultaneously measuring various aspects of their emotional response (such as body temperature and sweating, facial expressions, and self-reported feelings).

From this rich data set, my colleagues and I were able to identify how quickly spouses were able to recover emotionally from “hot button” moments during their conflicts. We found that the more quickly a wife was able to recover from negative moments during conflict, the happier the marriage tended to be. Viewing this finding in isolation, one may presume that wives matter in this context because they are better at regulating emotions.

However, this is not where the story ends. We actually found that wives and husbands were equally good at calming down emotionally during conflict. So why is it that only wives’ emotion regulation appears to matter for marital satisfaction?

We believe that this is due to gender stereotypes about emotion, which perpetuate the notion that women are the emotional centers of a marriage.

We believe that these stereotypes drove spouses in our study to focus more on wives’ feelings during conflict—hence the link between marital satisfaction and wives’, but not husbands’, ability to calm their emotions.

The good news on this front? These stereotypes may be malleable. We hope that gendered stereotypes about emotion continue to evolve in a way that encourages couples to look to both husbands and wives as emotional contributors to marriages. We speculate—with optimism—that replicating this study with a younger sample would reveal that the gender differences we found are less pronounced.

In the study, we were also interested in understanding why calming down emotionally during conflict serves marital satisfaction so well.

This stands in contrast with destructive communication strategies, such as criticizing and blaming, that reign when conflict is at its most heated; it also differs significantly from conflict avoidance, which may not be healthy for relationships either. Importantly, constructive communication is more likely to result in conflict resolution, thereby boosting marital satisfaction.

Thus, the finding suggests that the more efficiently that couples can move away from fiery moments in conflict—and toward more cool, calm, collaborative, and constructive moments—the better they will be able to engage in productive conflict resolution.

The takeaway here is not that women should stay quiet and avoid conflict. Rather, it’s that women—and men—should know that conflict and negative emotions are often key to a healthy relationship. What matters is not whether they engage in conflict but how constructively they can work through that conflict.

3. This study is descriptive, not prescriptive

Finally, this pattern of findings—particularly suggesting that wives bear the burden of managing emotion in relationships—is what we observed, not what we think ought to be. We believe that, regardless of one’s gender or generation, spouses can work consciously to focus on both partners’ emotional contributions to marital dynamics.

More than 96 percent of Americans marry at least once in their lives. This is an astounding statistic. Marriage is not only frequent, it’s potent: How well or how poorly these marriages fare has huge implications for both spouses’ sense of personal well-being, physical health, and mental health.

That’s why it’s critical for both spouses to put effort into learning and practicing skills to help downshift from fiery emotions to more calm and constructive discussion during conflicts. Whether couples choose to work with a marital therapist or embark on these efforts on their own, we believe that it’s very possible to change even highly engrained, destructive communication habits in relationships.