Those of us who struggle to resist junk foods or otherwise suffer a lack of willpower will be heartened by some good news from neuroscience. But there’s some bad news, too.

First, the bad news. A slew of studies suggest that we each have a fixed neural reservoir of willpower, and that if we use it on one thing, we have less for others. Tasks that demand some self-control make it harder for us to do the next thing that takes willpower. 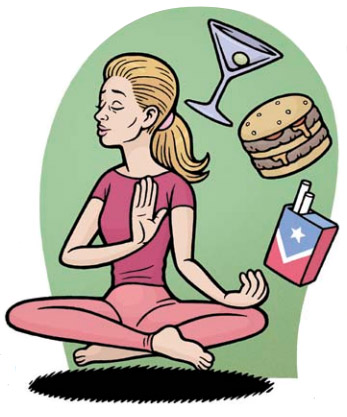 In a typical experiment on this effect, one group of people was made to watch a video of a boring scene; another was not. Then both groups had to circle every “e” in a long passage of writing. The result? The people who had to first sit through the boring video gave up faster. The same loss of persistence has been found when people try to resist tempting foods, suppress emotional reactions, or even make the effort to try to impress someone.

This all suggests we have a fixed willpower budget, one we should be careful in spending. Some neuroscientists suspect that self-control consumes blood sugar, which takes a while to build up again; thus, the depletion effect.

But the good news is that we can grow our willpower; like a muscle, the more we use it, the more it gradually increases over time. But doing this takes, of all things, willpower.

As the muscle of will grows, the larger our reservoir of self-discipline becomes. So people who are able to stick to a diet or an exercise program for a few months, or who complete money-management classes, also reduce their impulse-buying, junk food consumption, and alcohol intake. They watch less TV and do more housework. And this ability to delay grasping at gratification, much data shows, predicts greater career success.

This round-up of thinking on willpower comes courtesy of Sandra Aamodt and Sam Wang, whose recent book, Welcome to Your Brain, details the evidence about willpower.  But, writing in The New York Times, the duo poses a puzzle: While it’s clear that willpower has limits, what brain mechanisms let us build it up?

That question brought to mind a recent conversation I had with Richard Davidson, the director of the Laboratory for Affective Neuroscience at the University of Wisconsin. Davidson’s research these days focuses on neuroplasticity—how our experience shapes the brain throughout life. One surprise: though most of us learned that we have a fixed number of brain cells when we are born, and that we lose them steadily until we die, brain science now tells us the brain makes about 10,000 new cells every day, and that they migrate to where they are needed. Once there, each cell makes around 10,000 connections to other brain cells over the successive four months.

Davidson’s research finds that the left prefrontal cortex—the brain’s executive center located just behind the forehead—is a key site for helping us build willpower. Our plans and goals hatch here, and impulses are executed via this zone. There is a neural circuit in the prefrontal cortex that inhibits emotional impulse, and can be strengthened by a range of methods.

One of these methods, Davidson explained to me, is mindfulness training, a secular form of meditation widely used in settings from businesses to outpatient clinics. This is confirmed by a great deal of research. My own doctoral dissertation found (as have many others since) that the practice of meditation seems to speed the rate of physiological recovery from a stressful event. A string of studies have now established that more experienced meditators recover more quickly from stress-induced physiological arousal than do novices.

Research shows that other kinds of training can have similar effects, and the more time we devote to any of these trainings, the greater the result in the targeted areas of the brain. Brain imaging studies show that the spatial areas of London taxi drivers’ brains become enhanced during the first six months they spend driving around that city’s winding streets; likewise, the area for thumb movement in the motor cortex becomes more robust in violinists as they continue to practice over many months. A seminal 2004 article in the Proceedings of the National Academy of Science found that, compared to novices, highly adept meditators generated far more high-amplitude gamma wave activity—which reflects finely focused attention—in areas of the prefrontal cortex while meditating.

And so it makes perfect sense that we can build our willpower over time if we are committed to doing so, a process that changes our brains right down to the cellular level. Simply being consistently self-disciplined seems to help—going to the gym every day for months, or completing projects you begin—and so does mindfulness mediation. There are ways, it seems, to make it easier to “just say no” when we need to.