Should we really keep obsessing over how much sex we are or aren’t having? In her December 2018 cover story for The Atlantic warning that Americans—Millennials in particular—are having “so little sex,” senior editor Kate Julian soberly framed the drop as a “sex recession.” 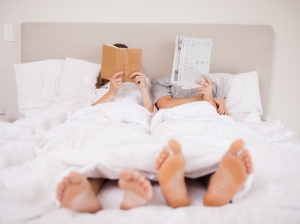 Drawing from a 2017 study led by Jean M. Twenge, a psychology professor at San Diego State University, Julian’s piece also highlighted evidence from the 2016 General Social Survey (GSS), conducted at the University of Chicago. That survey found that Millennials report having fewer sexual encounters on average than the two generations before them. And Millennials aren’t the only cohort facing a decline—from the late 1990s to 2014, sex for all adults dropped from 62 to 54 times a year, on average. The research showed a decline in sex mainly among white, middle-aged, married couples.

Julian’s tone—listing a myriad of theories to explain the drop, from smartphones to economic instability to Tinder—was cautionary. And news of the so-called “sex recession” provoked reactions across the internet, from Vox to Vice—not to mention the plethora of comments. It’s no wonder the topic is so popular: Everyone wants to know if the amount of sex they’re having is normal. “People have strong reactions to this because it’s very personal,” Dan Carlson, assistant professor in the Department of Family and Consumer Studies at the University of Utah, tells me. “In the U.S., we don’t talk about it a lot.”

But the fear of a “sex recession” is misdirected. A drop in sexual encounters from 62 to 54 times per year means that the average adult is still having sex more than once a week. Current research suggests that having sex more than once a week does not have any positive impact on relationship satisfaction. Less than once a week can bring down satisfaction, but more sex does not necessarily improve it. According to Carlson, “the amount of sex is a weak predictor of how satisfied you are with your sex life.” In other words, not only are the concepts of quality and quantity distinct, but there is little relationship between the two variables.

Julian acknowledges that the recession metaphor is imperfect. “Most people need jobs; that’s not the case with relationships and sex,” she writes. Nonetheless, sex is a critical factor in the health of any relationship. Recent research backs this up. In 2017, the psychologist Anik Debrot and her colleagues found that “sexual activity promotes affection, which, in turn, promotes well-being.”

The real problem with this argument is that it is a mistake to conflate sexual frequency with sexual satisfaction. Identifying the decrease in sexual frequency as a “sex recession” implies that more sex is always better. But while every dollar is of equal value, every sexual encounter is not. There’s also a bit of a dark side in framing sex as economic given the realities of sex work.

If we were really worried that a drop in sex rates was having a negative impact on relationships, we could look at marriage and divorce rates. But, it turns out, divorce rates have been steadily falling. An analysis by University of Maryland sociology professor Philip Cohen shows the rate dropping by 18 percent from 2008 to 2016.

Given all of these potential issues with the current research, and the paucity of research on sexual frequency and satisfaction in general, I reached out to several longtime scholars in sociology and family studies. To better understand the historical view of the issue, I spoke to Stephanie Coontz, director of research and public education for the nonprofit group Council on Contemporary Families, who told me she believes that “the severity of the problem can be exaggerated.” Not only can it be exaggerated—but more frequent sex can actually be a problem in certain contexts.

Twenge’s research shows that people born in the 1930s—the “silent generation”—reported the most sex. And those born around the 1990s, Millennials and iGen or Gen Z, reported the least. Still, the average amount of sex reported by the newer generation is only about six times fewer per year. There’s also an important side note to be made here: The GSS, which asks “how many sexual partners” someone has had since turning 18, is a vaguely worded general survey. But, more importantly, the quality of the sex between these generations is arguably wide-ranging.

As it turns out, the “silent generation” was not necessarily having satisfying sex. “In the oral histories I took from women in 1950s and 1960s marriages,” Coontz explained, “it was really clear that they were often ‘giving’ a lot more sex than they felt like having.” Even further, when couples are engaged in violent relationships, sexual frequency rises.

While much of the “sex recession” is being pinned on young people, our actions do not tell the full story. Again, what Twenge’s research shows is that the decline in sex was greatest among white, middle-aged married couples.

What’s happening here, then? Since age is a primary factor in sexual frequency, the rising age of marriage is an important variable, as well. And researchers have found that average married couples are spending more time with their children, which could mean less time with each other. But if we want to really understand the implications of the “sex recession,” we must first have a more complete understanding of what’s happening. While it is true that younger couples are waiting longer to have sex and getting married later, that’s not enough to explain the decline, especially since the drop was largest among couples who were married or living with partners.

Various socially conservative theories, such as attributing the decline in sex to the increase of women in the workforce, or to couples in general working longer hours, have been debunked. In fact, the reverse is true, with the busiest couples reporting the highest sexual frequency. And while pornography can sometimes pose issues for modern relationships by leading to unrealistic expectations, hindering intimacy, and, in extreme cases, leading to infidelity, researchers haven’t found its use to be correlated with a decline in sexual frequency.

There are other possible explanations, such as economic insecurity, or the increased social acceptance for women to have more sexual agency. But the point is: None of these reasons is enough, on its own, to explain the findings. As Coontz writes in an email, she believes “the ‘recession’ term is a hyped and misleading distortion of a complicated set of very different factors that could just as easily be seen as a rebalancing rather than a retreat, but most of all should not be treated as a single phenomenon with one overarching cause.”

When it comes to the so-called sex recession, words do matter. It’s even possible that it could be good news for marriages. What has been dubbed a “sex recession” could be, in effect, more of a healthy “sex diet”—trimming away junk but keeping the essential nutrients. According to Coontz, “the decline in sexual frequency probably reflects women’s increased ability to say no, and men’s increased consideration for them.” Let’s not forget what #MeToo taught us: Women almost universally experience unwanted sexual advances (and some men do, too).

There is no “normal” amount of sex. And worrying about how much sex you’re having—which can increase anxiety, decrease body confidence, and hinder healthy communication—is not good for your sex life either. In terms of desired sexual activity, every individual, and every couple, is different, including people who identify as asexual. And sex is not one specific, measurable value that can be treated the way we look at, say, weight or blood sugar. For Coontz, that means interviews can reveal greater insights into the kinds of sex people are engaging in. Without that, she’s “suspicious of any hand-wringing about it.”

Regardless of the realities behind the “sex recession,” it does not mean there’s nothing to worry about. When it comes to the effect of smartphones and screens on the quality of relationships, for instance, the research is disquieting. A 2018 study in Psychology of Popular Media Culture makes the case that a person’s dependence on their smartphone can be detrimental to the health of their relationships. And decades of research by the MIT psychologist Sherry Turkle gauge the toll of our devices on our conversations and interactions with friends and partners.

At a fundamental level, I share Julian’s concern when she writes that she “was taken aback by what seemed like heartbreaking changes in the way many people were relating—or not relating—to one another.” This is what we should focus our attention on. It turns out, though, that a small drop in aggregate annual sexual frequency has no demonstrable effect on how couples form, and sustain, fulfilling relationships.

This article was originally published on JSTOR Daily. Read the original article.