Ebenezer Scrooge finally shook in his slippers when the Ghost of Christmas Future showed him that his past bad deeds led to a bleak future, for him and others. As parents, how do we ensure our children don’t become like Scrooge? We want our kids to be kind and generous, lifelong, but how do we encourage these ideals?

A recent study by Arber Tasimi, a graduate student at Yale University, and Liane Young, a professor at Boston College, found that kids who do good—and think back on it—are driven to do more and more good. As Tasimi says, “These findings show that something as simple as asking children to reflect on their past good deeds has positive effects on children’s behavior.” 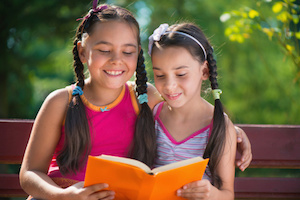 To conduct the study, which was published in the Journal of Experimental Child Psychology, the researchers recruited 225 children ages six to eight. They gave each child five stickers and assigned them to different groups: Some children recalled a time they were nice to someone (the nice group); others recalled a time they were mean to someone or when someone was nice to them. As a comparison, another group of kids was asked about a time they watched a movie.

The researchers then showed the children an image of a fictitious character, Gary, who had no stickers. Children were asked whether they wanted to give Gary any of their five stickers, and those in the nice group gave the most stickers. In other words, these children behaved more generously compared to their peers in the other groups.

As the researchers note, after adults have performed a number of good deeds—thus accruing “moral credit”—they cut back on their generosity. Would children behave stingily after they recalled multiple instances of their goodness?

To explore this possibility, the researchers asked another group of children to remember three different times when they were nice to someone. They found that these children behaved just as generously as those who had recalled a single instance of their past goodness; children, it seems, don’t dole out good deeds in a calculating way.

If we want to raise kind children, this study suggests, we can reinforce good behavior by telling stories about their past kindnesses and offering gentle reminders when they’re deciding whether to share. (And a key way to motivate good behavior in the first place, according to a 2014 study, is for parents, educators, and other trusted adults in kids’ lives to invite them to be helpers, rather than informing them they can help—so helping becomes part of their identity.)

Looking ahead, Tasimi hopes to investigate other factors that lead children to do greater good. He is especially interested in examining the role of peer influence on children’s generosity.

In other words, children could be positive role models for each other—in the spirit of Tiny Tim.